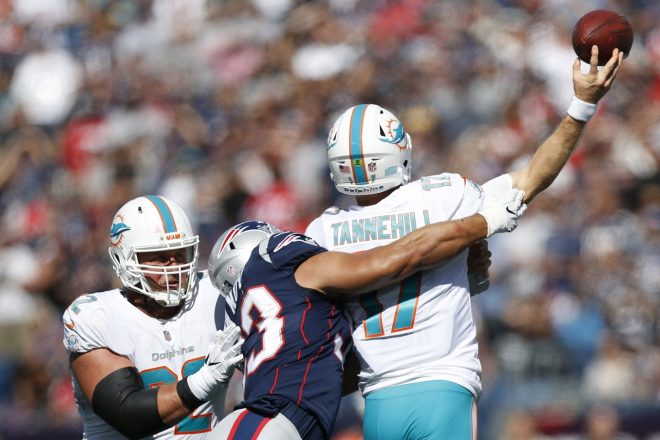 The New England Patriots entered their week four match up with the division rival Miami Dolphins seeking to rebound from two-straight losses and avoid their first 1-3 start since 2001.

Per @EliasSports the last time the #Patriots played a division game against a team two games in front of them in the standings: Tom Brady's first career start exactly 17 year ago today.

It is not the highs that define us… #GameDay

You know what time it is @im_mista_lavalava71 ! Game Day let’s Eat! #DARKGRIND

Devin McCourty on brother Jason, via CBS pregame: "What annoys me most about this guy, um, is just his face. He kinda looks like me, but he doesn't. So, to look at it is kinda weird."

Early on in the first quarter, newly signed wide receiver Josh Gordon tallied his first reception as a Patriot which helped setup the first points of the game.

In the second quarter, with the score still low, Cordarrelle Patterson found a hole in the Dolphins secondary for his first touchdown reception as a Patriot. 10-0 New England.

More TB12 history: @ceeflashpee84 is the 22nd different player to catch a 50-plus yard TD from Brady, breaking a tie with Jack Kemp for the most all-time.#MIAvsNE | #GoPats

In what became a recurring theme throughout the game, the Patriots defense turned in its best showing of 2018. Shutting down the Dolphins offense, especially on third down.

Dolphins on 3rd Down So Far:

Pats D doing a good job of keeping them in long-yardage situations so far.

Despite the great start, Patriots head coach Bill Belichick wasn’t going to be pleased with his offense committing three penalties on play.

Three separate penalties by the Patriots' offense on one play. I'm sure Bill Belichick will be pleased about that one.

When people say the Pats run is over pic.twitter.com/MmTqbkiGMG

These are the Dolphins I'm used to seeing in Foxboro.

Still leading 10-0 with seven minutes to go in the half, linebacker Kyle Van Noy forced a fumble that setup a James White 22 yard touchdown run on the very next play. 17-0 in favor of the Patriots.

As the defense continued to do its job keeping the Dolphins offense off the field, the Patriots offense was clicking as Phillip Dorsett hauled in this acrobatic catch just before halftime.

During the halftime break, the New England Patriots honored newly enshrined team Hall of Famer Matt Light, who provided a very “colorful” speech to the fans.

In the third quarter, the Brady/White combination struck again with another touchdown, and all but putting the game away.  31-0 Patriots.

With the Patriots up 31-0 and the defense continuing to shut out the Dolphins, rookie Sony Michel capped off his career day with his first career touchdown run.

The #Patriots have scored 38 points today.

Combined, the #Dolphins/#Bills/#Jets have scored 3 points.

With a 38-0 lead, the Dolphins managed a garbage time touchdown with 2:42 remaining in the game when Frank Gore caught a six-yard pass from backup quarterback Brock Osweiler.

The Patriots would go on to win by a final score of 38-7.

@ceeflashpee has a message for Patriots Nation after that home W.

Find someone you look at like Brady looks at Amendola.
Then crush them by 31 pic.twitter.com/4ISrkr9qWM

All is right in New England now right??? Haha I’m playing y’all! Just for today it’s right tho and feels good to win! All love to #patsnation today. On to the next…. #beatcolts

Don’t call it a comeback, it was dark now the suns back. #carterV #greatTeamwin #Gopats