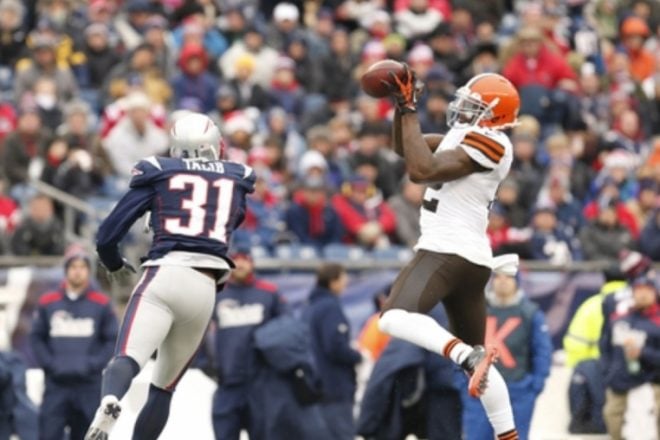 Bill Belichick is never one to shy away from a player if he feels he can help his football team and Monday saw him acquire one who will hopefully improve their offense coming off of Sunday’s loss in Jacksonville.

The team acquired Josh Gordon in a trade from the Browns and Gordon comes in as a talented player who is likely looking for a little more than just success as he looks to make an impact here in New England. For those who know anything about Gordon, the numbers on paper from what he’s done on the field certainly don’t tell the whole story in terms of who he is off of it. When you take into consideration what’s been a really rough tenure since Gordon came out of college, the fact he’s even made it this far is surprising. He was a mess then personally and he’s been an even bigger mess during his time in the NFL.

He’s a player who has dealt with multiple suspensions since reaching the NFL after being selected in round 2 of the 2012 supplemental draft, which has plagued him. His problems have, unfortunately, been self-inflicted and he’s remained on the losing end of his long battle with substance abuse.

On the outside, it’s easy to criticize players who put themselves in this position. With a league full of players who do things the right way and flourish, it seems like a given that everyone else should fall in line. But what people forget is the road from where they each started and the support systems they have behind them vary greatly, allowing some to stay on the right path while others fall off of it.

The worst part for Gordon is the fact his on-field stats aren’t even the most impressive thing we can take from what he’s done so far, it’s the fact that he’s fortunately managed to not hurt anyone else by his bad decision making is somewhat of a miracle, something he’d probably even admit himself if given the opportunity.

Gordon admitted as much in an interview with GQ last year when he talked about his battle with addiction and the close calls he’s already been through. He cited one from 2016 where he narrowly walked away after wrapping his car around a telephone pole.

“I was in a car accident, totaled the car, wrapped it around a telephone pole,” Gordon told the magazine. “[We were] speeding. Me and another passenger, both [explective]-faced, thinking it’s fun. Sideswiping cars on the street. Putting other people in danger. And then ultimately, it’s like: How the hell did I walk out of that without a scratch? Cause the car is blown to [expletive].”

The veteran receiver said at the time that his motivation to get sober revolved around his family, expressing his desire for “the normal things”. Fast-forward one-year later and his problems continue, with Gordon now entering into an opportunity that could either resurrect his career, or just be the final chapter for a player with untapped potential. 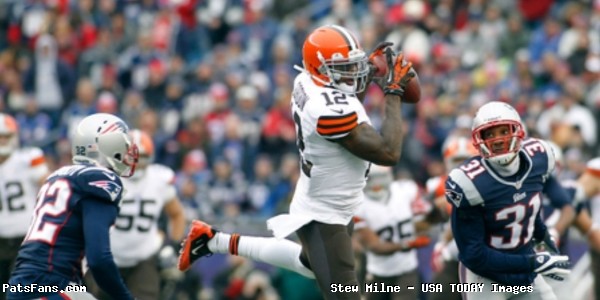 Hopefully a fresh start will be just what Gordon needs. (USA TODAY Images)


If you take a step back and think about it, it’s hard not to wonder how frustrating it has to be to play in Cleveland. As a player, one has to wonder how even the most conscientious of players manages to deal with sacrificing everything week in and week out only to come up empty time and time again.

As a region, Cleveland has already given Gordon problems. The receiver admitted that it’s a city where the fans have taken things too far, which gives a little insight into why players tend to stay away, while those who are there struggle to thrive and don’t seem to stay with the team.

“Living in Cleveland, sometimes it could be a nightmare,” said Gordon. “I’ve been harassed, had drinks thrown at me. I’ve been [followed] in the grocery store, heckled everywhere. At the games, people harassed and heckled my brothers and my mom. [My] brothers got into fights in the stands. Cars [have] been jumped on. Somebody dented the hood of the car. Had to sue a guy and get the money back cause he damaged the car. People are throwing money, pennies, to break the windows. So Cleveland was rough, man.”

He’s certainly about to be in for a little different change in culture. Fans here in New England, even for the most damaged of players, tend to be supportive as long as they buy in and perform well. In the locker room, the environment and atmosphere have proven in many cases to be enough for these types of players to turn their careers around. With a quarterback like Tom Brady, Gordon will likely find himself initially with the benefit of the doubt, but with big expectations once the work begins.

Brady told Jim Gray during his appearance on Monday night football that he’s withholding his expectations until he sees how Gordon performs on the field.

“You know, I hate to make projections and expectations,” said Brady via Ben Volin of the Boston Globe. “That’s not fair. I’ve never met Josh personally, just like I hadn’t met some of the guys that have come in the last couple weeks. So we’ll see how it goes this week and hopefully he can work hard, put the team first and end up helping us in any role that he can find for himself on the team.”

On paper, the acquisition definitely seems to be a good one. All you need to do is go back to 2013 where Gordon piled up 1646 yards receiving and 9 touchdowns over 14 games to realize the talent is there. The 27-year old has the physical attributes to be a dangerous player in this offense if he can get it together. The cost was definitely low enough for the Patriots (a conditional 5th) where it was worth a shot to give him an opportunity, with the risk/reward scale tipping dramatically in their favor.

For Gordon, his actions landed him an opportunity to showcase himself and experience being part of a franchise that demands the best from every player in the locker room, giving him a potential distraction to help him in his struggle to stay sober. Winning tends to cure a lot of things and if he’s productive, it may hopefully be enough to give him some confidence to even potentially overcome his issues.

If he doesn’t, he simply joins a long list of players who didn’t pan out in an offense that Brady recently explained was “graduate level” and demands quite a bit from the players who are a part of it.

For Gordon, it’s an opportunity as a fresh start to resurrect not only his career, but his life as well. Everyone loves deals that are win-win for both sides and hopefully for Gordon’s sake, this will be just the one he needed to finally get him to where he needs to be.