4 years ago at 7:15 am ET
Follow @SteveB7SFG
Posted Under: Patriots Commentary 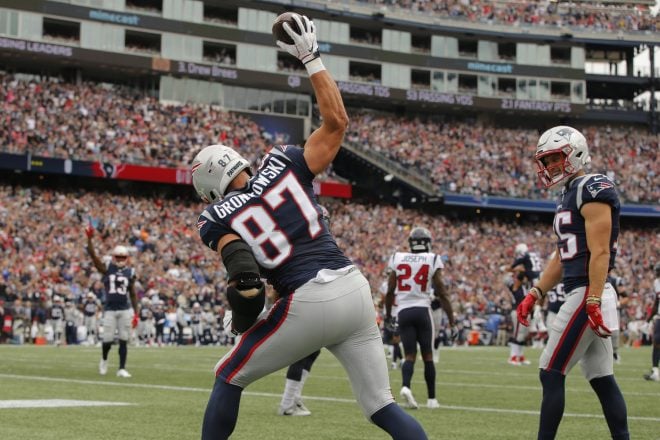 The rematch of the AFCCG  A Big Early Test

The New England Patriots hit the road to take on the Jacksonville Jaguars in a big Week 2 matchup. After the two teams met in the conference championship in January, and Tom Brady led the Patriots to a big 4th quarter comeback win, many people believe that Jacksonville is ready to take the next step and challenge the Patriots for supremacy in the AFC.

Sunday’s game, in that respect, will be more important to Jacksonville than to New England, who under Bill Belichick, tend the treat the first quarter of the season as an extended preseason. But the hype is there for both teams and we would expect to see both teams approach this as a big, albeit early season game.

There has quite a bit of chirping from the talented but brash Jalen Ramsey about several members of the Patriots, including Rob Gronkowski. Ramsey doubled down on his comments this week, basically calling him out.

“I might be crazy, I don’t care,” Ramsey said. “He’s good, don’t get it twisted, he’s good. You saying this to me is supposed to bring fear to me or something? I don’t fear no man, period. So he’s going to have to come out there and line up on me.”

Actually, he backtracked a bit on what he said last month when he said Gronkowski is overrated so no, no one is getting it twisted.

So Ramsey will get what he wants, playing for a small market team, he’ll now be the focus on Sunday’s broadcast regardless of who lines across from him in a Patriots uniform. It won’t be the Jaguars defense but Ramsey that will be the subject of much of the talk this week. It has already begun.

However, the game will feature a number of key matchups that will determine the ultimate winner on Sunday around 8:00 p.m. and bragging rights, for a few weeks anyway. The Jaguars defense plays a very Seahawks-esque Cover 3 and they have tremendous speed all over the field. But they also have the capability to mix in man coverage as well when they want. The front is very hard to run against, they consistently get penetration across the board which interrupts the flow of the offense.

What seems to work against the run defense is some zone runs, misdirection, players in motion. The backs will have to have the vision to see some cutback lanes when they avail themselves.

The Patriots QB is coming off a very solid game where he threw for 277 yards and three touchdowns but he knows that the Jaguars secondary is much better than Houston’s, something he witnessed firsthand in the conference championship.

The pass rush is very good and they get excellent pressure from the inside, which takes away from Brady’s ability to step up and slide from the outside edge pressure. Brady can counter that with getting the ball out quickly something he’s done for virtually his entire career.

He’ll look to spread the ball around and get everyone involved in the passing game. James Develin caught four passes last week after catching six all of last season. Brady will use his backs, James White and Rex Burkhead, (if he’s available) much like slot receivers and try to get them in motion.

Gronkowski had a huge game last week and with the thin depth at Wide Receiver, his role becomes even more important to the offense. He’s Brady’s most trusted go-to guy on the roster and Jacksonville will try to take him away and force Brady to go elsewhere to beat them.

Last year, the Jaguars did a good job on Gronkowski with safety Barry Church in the first half of the conference championship. It was Church’s borderline head shot that knocked him out of the game with a concussion.

Look for Brady and Josh McDaniels to move Gronkowski around the formation trying to free him up as much as possible, especially right off the line. But McDaniels will also use Gronkowski as he did last week, to open up more field for the other wide receivers.

Phillip Dorsett seemed to make great strides last week in his development with the Patriots offense, making seven catches on the day. This week, the team may need similar efforts from Chris Hogan and Cordarrelle Patterson.

The team got Patterson involved early and he had four touches in the first half, but none in the second half. Hogan had a very disappointing game and had just one catch for 11 yards. That won’t be enough this week.

Both will have to step up their games to give Brady other options to work with. Patterson will likely see single coverage outside and other than his usual gadget type package that the team worked on with him this summer, he could be used to stretch the field along the boundaries.

The Patriots best defensive lineman made his first appearance on the field last week and had a very impressive game. He’ll be looking to keep his production up this week as the Jaguars present a more difficult opponent for the Patriots, especially on the road in what promises to be a loud and raucous stadium.

I actually look for Blake Bortles and the Jaguars offense to be more aggressive in the early going and throw early and then use their punishing ground game to wear down the Patriots defense in what promises to be 93-degree heat and keep the offense on the sideline.

Bortles can move and scramble with the ball, Flowers and the other edge players must push the pocket without losing containment and bring pressure on Bortles and try to disrupt their passing game. He’s the guy that sets the tone for the other Patriots edge players and he’s in the spotlight this week.

The Patriots rookie linebacker had a very solid summer followed by an impressive rookie debut against the Texans last week. With the power running game of Jacksonville with Leonard Fournette and T.J. Yeldon, the Patriots run defense must be much better than it was last week.

The Texans ran to the left and I expect that the Jaguars will as well. The inside running game will be a key area to watch and the big (6’2, 255) rookie from Purdue will have another big test this week. He played more snaps at linebacker than anyone last week and I would expect him to have a heavy workload again.

With the heat to play a factor late in the game, I’d look for the Patriots to rotate players in and out as often as possible. So Bentley, Dont’a Hightower, Kyle Van Noy and to a lesser extent Elandon Roberts should all see a significant amount of snaps. Third downs will be even more key this week with the heat factor. The team that wins third downs will wear down the other in the fourth quarter.

The Patriots running back core was supposed to be one of the deepest areas of the team. But Sony Michel had his knee drained of fluid and has yet to see the field this season either in preseason or the regular season. Jeremy Hill was placed on IR  with an ACL tear and Rex Burkhead is limited in practice with a concussion. That leaves James White and the just signed Kenjon Barner as the only healthy backs on the roster.

Michel and Burkhead’s status this week is pretty murky so the team will lean heavily on the experience of James White. His plate is going to be full this week by default and add in facing a defense with the capability of the Jaguars and his workload will be extra heavy as the offense looks to find some room to maneuver.

While White is usually the Patriots go-to back in the passing game, this week, he may be forced to take on a larger role in the running game as well.

The Patriots veteran safety has had an increased role in his second stint with the team and has earned the trust of his fellow players and the coaches as well. With the changes the Jaguars had in their own wide receivers this year, Allen Hurns and Allen Robinson left via free agency, Marquis Lee on IR, they’ll lean more on their tight ends.

Which means Chung will draw more of Austin Seferian-Jenkins this week. Jenkins played well against the Patriots a year ago with the Jets and this will be a key matchup to watch. Chung is always good in run support and he’ll be expected to help there as well.

But against the Jaguars this week, we’ll probably see more of the “Big Nickel” with more three-safety looks with Devin McCourty and Duron Harmon to lend more support for the run defense. Chung should factor prominently this week in the Patriots game plan.