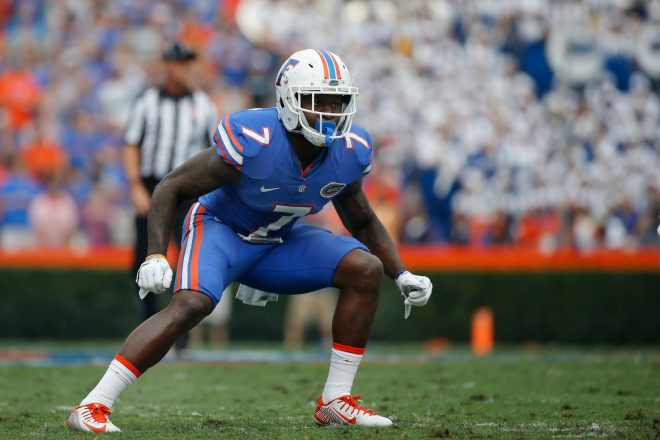 After a flurry of trading activity in the second round that had the Patriots trading down from #43 to #51 and #117 (Detroit) to trading that pick for a 2019 2nd round pick (plus #105 from Chicago), they then traded their #63 pick and #117 (received in the trade with Detroit) to move up to #56 to land slot corner Duke Dawson from Florida.

So who is Duke Dawson? He was a one-year starter for the Gators, having to wait his turn playing behind Vernon Hargreaves, Quincy Wilson and Teez Tabor, playing some safety and slot corner before getting his shot in 2017.

Projected to go in Rounds 3-4, Dawson is a slightly undersized corner at 5’11, 200 who is at his best when matched up in press man coverage, although he does well in zone as well. He has good footwork, fluid hips which allow him to turn and run with receivers and does a good job of mirroring. He can be a little handsy, walking a fine line between locking up and holding.

His lack of height may hurt his chances to play effectively on the outside, he struggled a bit when facing the bigger wide receivers of the SEC. His frame makes him look more like a safety than a corner, with his shorter, stockier frame. So, file that away for future reference.

He doesn’t have great top-end speed but shows very good anticipation and is known as a team-first guy. He’s very competitive and feisty, something that probably resonated well with the coaches when he visited here earlier in the spring.

For 2018, he should be immediately in the mix for the slot corner position with Jonathan Jones (if he ’s healthy) once training camp opens. But he could be a guy that can be moved to safety as well down the road. Versatility goes a long way.

Dawson is a guy that would’ve been available lower in the draft, but they obviously liked him and if the team likes a player, they’ve never been shy about going to get him.