5 years ago at 9:14 am ET
Follow @IanLogue
Posted Under: Daily Patriots Notebook

A bit of a somber morning on this Friday after the passing of a Patriots legend, but here’s a quick rundown of this morning’s news.

Patriots Legendary Broadcaster Santos Passes – For anyone who listened to the broadcast of Patriots games over the course of Gil Santos’ incredible career, the news of his passing on Thursday night should be tough to take.

Santos, who passed away on his 80th birthday, was one of the best in the business, painting the picture of every play with his booming voice and making some of the most historic calls, including calling each of the team’s winning plays during their first three championships.

RIP to Gil Santos, father to the greatest call in the history of Boston sports. He was the best in the business. pic.twitter.com/ph5sEoLe2Y

The emotions poured out on Twitter minutes after the news broke and rightfully so given what he meant to this region.  His voice was synonymous with Patriots football, and while many were happy for him when he retired following the 2012 season, they were certainly sad to see him go.  Hearing Thursday night’s news was tough due to the connection many felt with the man who made so many historic moments come to life over the radio.

Ironically, Santos’ final season covering the team wasn’t without it’s own uncertainty given that the legendary broadcaster had his first brush with death on February 24th, 2012 while he and his wife were out to breakfast in Middleboro, Massachusetts.  According to multiple reports, Santos went to the men’s room and then staggered out, leading to an ambulance being called.

But that’s where things really got concerning.  He deteriorated from there and ended up on a ventilator in intensive care for three weeks, which included being read his last rites three times.

When we woke back up, he had no memory of what happened.  Santos remembered getting into the ambulance but had no recollection from there over the course of being unconscious over that span.

“I got in the ambulance,” Santos said via the Worcester Telegram, “and the next thing I remember was asking my wife where I was and what had happened to me. That was three weeks later. I don’t even remember being admitted.”

He underwent plenty of rehabilitation and fought his way back to getting himself ready to get back on the air that season, which given the fact he was 72 at the time, was tremendous.

Santos was honored during his final regular season broadcast, with Robert Kraft announcing that Santos would be inducted into the Patriots Hall of Fame in 2013.  Fittingly enough, he was inducted alongside fellow inductee with one of the all-time favorite players in Tedy Bruschi.

“I am a very lucky man, because my whole life has been great,” he said via WCVB during his final game. “Good parents, good brother, good upbringing, good friends and good family,” he said. “I got the job I wanted. Made a living over 50 years working in a job that I love to do. Yeah, I was a lucky guy, absolutely.”

Here’s a feature done on him leading up to his retirement:

Here’s a moment shared by Marc Bertrand from a memorable call during the Drew Bledsoe era, with a last-minute win over the Bills.

And some additional calls from their first Super Bowl win:

Best wishes from all of us here at PatsFans.com to his friends and family.  He will definitely be missed. 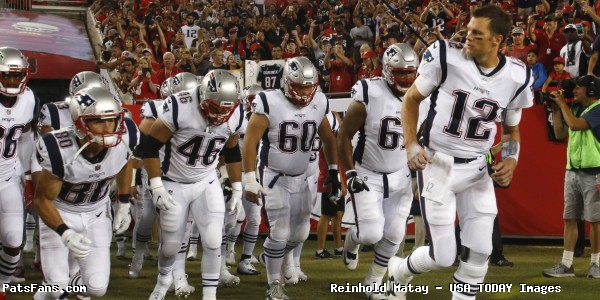 The Patriots face a tough schedule in 2018.

Schedule is Somewhat Challenging for the Patriots in 2018 – Following the release of the 2018 regular season schedule on Thursday, the Patriots road to Atlanta certainly won’t be easy.

The team will open up against Houston with a 1:00pm game against the Texans at Gillette Stadium on September 9th, but the league put together a pretty bizarre stretch of games at several points from there for the team this season.

For example, they play two of their first three on the road, followed by three games at home, only to play three of their next four on the road before their bye on November 18th.

After that, they play three of their next four again on the road, before playing their final two at home against both the Bills and Jets to close out the season.

It’s an interesting stretch and the final two road games are against both the Dolphins and Steelers, which given that they’re in December should hold some playoff significance, especially against Pittsburgh as it pertains to playoff seeding.  The team will play five night games and they also get little reprieve given how those fall.

They play a Sunday night game against Matt Patricia and the Lions on September 23rd with a 1:00pm game up next against Miami the following week.  But from there, they play two in a row against the Colts on Thursday night and a Sunday night game against the Chiefs on October 14th.  Then they travel to Chicago to battle the Bears in a 1:00pm game on 10/21, only to then turn around and fly to Buffalo to battle the Bills on Monday night and then come right back home to face the Packers in a Sunday night match-up on a short week.

It should make for an interesting season and it seems like the schedule-makers certainly weren’t kind to the perennial contenders.  However, as Bill Belichick likes to say, they can only play who they’re given how ever they’re on the schedule and for now, they’re on to the Texans.  You can click the schedule link in our navbar to view it in its entirety.

Belichick Among Most-Respected Coaches – When it comes to agents needing to be on their game, there’s only a handful of coaches who force them to be at their best and Belichick appears to be one of them.

According to USA TODAY, Belichick was the second-most respected decision that agents respect the most, second to just Baltimore’s Ozzie Newsome.  The publication reportedly surveyed 25 agents and both Belichick and the Patriots came up near the top of the lists.

When it came to “Which team is prepared during contract negotiations the best?”, the Patriots came in 3rd behind just the 49ers and Eagles.  The funny part of the survey was the fact that the team’s that were considered to be the least prepared were the Bengals, Browns, Redskins and Bears, with the Jets and Raiders tied for 5th worst.

It was an interesting poll and gives you a little insight into many of the teams given how they’re viewed from the outside by the people involved in player negotiations.  When you take into account the success/failures of the teams listed, many of those takes certainly become a little easier to understand.  But if nothing else, it provides context in terms of some of the contract negotiations we’ve followed over the years and the results were certainly interesting.

In the meantime, hope all of you have a great weekend and we’ll see you on Monday.