5 years ago at 9:25 am ET
Follow @SteveB7SFG
Posted Under: Patriots Commentary

Most Draft Boards Are Starting To Stabilize

The Patriots have several options for the first two rounds in the upcoming draft that begins on April 26. They may opt to move up to take a quarterback to eventually succeed Tom Brady, stand pat with their picks or slide back, something they’ve done quite often.

While most people had the Patriots taking a tackle early if not in the first round of the draft, we felt that was not going to be the case. After investing in Tony Garcia last year and bringing back LaAdrian Waddle, our take is that they may draft one, but more for depth. Now with the news that Garcia is fully ready to go, we’ll double down with that.

For our third mock draft, we didn’t do any trading to move up or down the draft board, however, the feeling is that the Patriots will be moving around the board. They currently have no 4th or 5th round draft picks, and that will undoubtedly change. But we went with building the depth especially on defense with two linebackers, two edge players and a corner. Future concerns at QB and TE were addressed, and the latter is ready to produce immediately.

In their “On the Clock” simulator, you are the GM for any NFL team. You can choose how many rounds you’d like to draft for (1-7), and pick one of several big boards to choose from. The boards are all updated every Tuesday.

For this third mock draft (4-12), I used the big board of NFL Draft Scout. 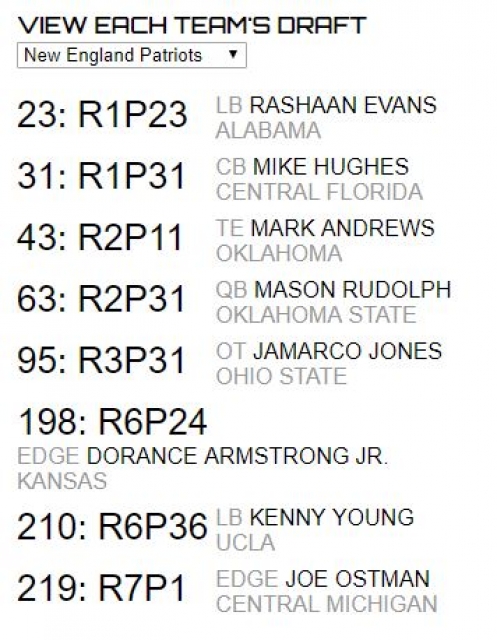 Once again Evans was still on the board at #23 and was too good a prospect to pass up. He has tremendous speed, range, and agility. Evans was the Alabama team leader in tackles, flies around the field from sideline to sideline, can cover, blitz off the edge and stuff the run. A Day 1 starter and the kind of sure-hit player the Patriots like to take in Round 1. Subsequent rounds are for reaches Read our draft profile on him here:

Hughes is a very good press man, lock-down corner, despite not having great size, (5’10, 195-pounds) has the mentality and skill to be a very good corner at the next level. He is a physical corner that is adept at throwing receivers off their timing and is a very good tackler and run defender. He’s a versatile player with special teams value, returning a kickoff, punt and interception for touchdowns in 2017.

Round 2, Pick #43 TE, Mark Andrews, Oklahoma:
The Patriots could use an eventual replacement for Rob Gronkowski and Andrews has the same qualities as a receiver, with excellent hands, the ability to stretch the field and attack the seams and is an absolute mismatch against linebackers and most safeties.  Andrews has good size at 6’4, 254 pounds, who won the John Mackey Award as the nation’s top tight end catching 62 passes for 958 yards and eight touchdowns for the Sooners. He’s not a great blocker…yet, but with some coaching can improve there.

Round 2 Pick # 63 QB, Mason Rudolph, Oklahoma State:
Rudolph has the boxes checked with the prototypical size of NFL QBs at 6’4, 230 pounds and was a four-year starter for the Cowboys in their spread, up-tempo passing game. He throws an excellent deep ball with very nice touch and ball placement. The knock on him is that he played in a very simplified system and had a tendency to stare down his receivers. He’ll have to learn to process faster in the NFL and go thru his progressions, something he’ll have time to learn behind Brady.

Jones was a two-year starter for the Buckeyes who have developed quite a pipeline for tackles in the NFL. Jones has good size at 6’5, 310 and is a very good pass blocker, and has shown the quick feet and agility to rarely get beat by speed rushers on the edge. He’ll need to get stronger and become more physical, especially in the running game at the next level but under the tutelage of Dante Scarnecchia, he’ll get there. With the Garcia news that he’s healthy and ready to go, Jones won’t be hard-pressed to produce as a rookie.

Armstrong had a tremendous 2016, with 20 tackles for a loss and 10 sacks as his coaches had him pinning his ears back. In 2017, going to a more read-and-react style, those numbers dropped to 9.5 TFL and just two sacks. But he has very good speed and a quick first step. Armstrong has dropped into coverage at times, something the Patriots ask their edge players to do occasionally. He’s a good, athletic player who tackles well but needs to add some bulk at the next level.

Young is an undersized, speedy, athletic linebacker who may be a candidate for the “big nickel” linebacker role the Patriots like to run in their sub-packages. He’s got plenty of speed and athleticism to play sideline-to-sideline and cover backs and tight ends in the passing game. However, he lacks the bulk and strength (6’1,236) to play on every down. He may be a Special Teams player first and work his way into a subpackage role.

Ostman is a guy who’s draft profile is all over the place. While most have him as a 6th-7th round draft pick, others have him as high as a 3rd-4th round selection. He’s a high-motor, slightly undersized edge player at 6’2, 250 pounds that wins with second effort. He uses his hands well and possesses a nice spin move. He was very productive in the MAC but will have to get stronger at the next level.