5 years ago at 8:10 am ET
Follow @IanLogue
Posted Under: Uncategorized 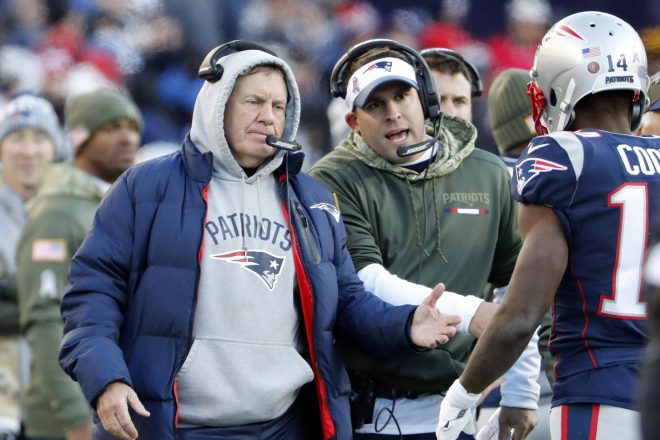 It’s finally Friday and here’s a look at this morning’s top stories.

Cooks Said There Were No Surprises By Belichick in Trade – For anyone who remembers the Richard Seymour trade, the one involving Brandin Cooks went dramatically different after the now-former Patriots receiver said that Belichick personally called him before the deal went down.

Cooks was dealt to Los Angeles earlier this week along with a fourth-round selection in exchange for the Rams’ 1st round pick (23rd overall) and sixth-round draft pick.

“Belichick gave me a call hours before it happened,” Cooks said on Thursday via a video posted by Joe Curley of the Ventura County Star.  “Have a ton of respect for him and we have a ton of respect for each other.  You hear horror stories – guys finding out on Twitter or whatever.  But at the end of the day, the way that they run things over there and the respect that we have for each other, he gave me a call and gave me a heads up.  At the end of the day, you have to respect that and you’ve got to understand it’s a business.”

Brandin Cooks explains how Bill Belichick broke the news of his trade to Los Angeles and what lessons learned in New England he will bring with him to the West Coast @usatodaynfl @GregABedard @CVRamsClub pic.twitter.com/PD0zfUeSRk

The Seymour trade in 2009, which stunned everyone and happened right before the start of the season, went quite differently.  The former Patriots defensive tackle was reportedly blindsided by the move after the team shipped him off to the Raiders, to the point where he initially didn’t report to his new team right away, leading Oakland to reportedly send him a five-day letter.

But he admitted after the fact that the reason behind the delay had to do with personal matters that immediately took priority as he turned his attention there first, before the reality of what had happened eventually set in.

“First of all, I was blindsided by this whole event,” Seymour told the Boston Herald back in 2009. “When you get blindsided, you should take a moment to gather your thoughts. I have a lot of personal issues more pressing than football.”

Seymour, who at the time had four children and was the guardian of his 15-year-old cousin, whose mother had passed. The 15-year-old had reportedly been in school in South Carolina until that year, at which point he was starting high school in North Attleboro.

Needless to say, that trade caused a major change in plans for his family.  After having a week to sort things out, Seymour’s wife and family decided to move back to South Carolina (where they are from) and Seymour headed off to Oakland by himself.

It’s a reminder that when these transactions happen, it’s more than just a roster move for the team and there’s a lot more involved for the guys who have loved ones behind the scenes who are affected.  Fortunately for Cooks, Belichick did the right thing and the two parted on good terms.

Patriots Sign WR Matthews – After losing two starters at receiver this offseason, the Patriots find themselves in a unique situation where they have a couple of question marks that they really won’t have answers to until probably the end of training camp when they’re done evaluating this year’s group.

After trading Brandin Cooks to the Rams this week, along with the loss of Danny Amendola to Miami, New England made a move on Thursday to bring in another player to compete for an opportunity in the offense after reportedly signing former Bills receiver Jordan Matthews to a one-year deal.

According to the Boston Herald, Matthews visited Green Bay, Arizona and the Titans before ultimately settling on the Patriots.  He had been in New England on Monday for a visit and the timing of the Cooks move opened up an opportunity Matthews may have felt he could capitalize on.

The veteran wideout certainly has a pretty good resume.  He spent three seasons with Philadelphia where he consistently had over 800-yards receiving in his first three seasons but spent last season in Buffalo after being traded, appearing in 10 games but caught just 25 passes for 282 yards after battling injuries.

Matthews had a quiet game against New England during their Week 13 blowout 23-3 loss to the Patriots, catching just one pass on three targets for 14-yards.  That proved to be his final game of 2017 after he suffered a chip fracture in his sternum during practice the following week, with a knee and ankle injury compounding his situation before he eventually ended up in injured reserve.  Matthews later wrote that the latter injuries were actually lingering issues that he said had been bothering him for a couple of years, with him also saying he was confident he’d make a full recovery.

If he really is back to 100%, it sets up an interesting scenario as the former second-round pick has shown enough over his brief career that he could be a productive player with Tom Brady throwing him the football.  The question now is how he’ll fit in with a group that includes incumbents Chris Hogan, Julian Edelman, Phillip Dorsett, Malcolm Mitchell and Kenny Britt, as well as newcomers Cordarelle Patterson and Riley McCarron and practice squad player Cody Hollister.  It should make for a competitive camp, but the possibility still likely remains that they’ll add at least one more player to this group before training camp opens. 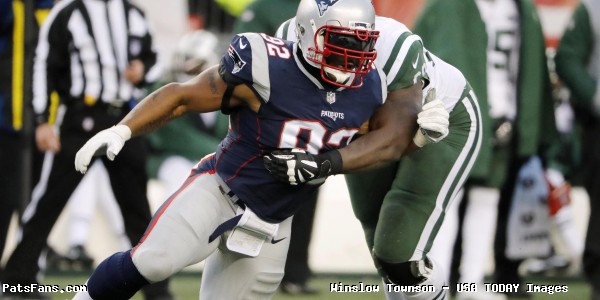 Harrison had a strong showing for the Patriots last season.

Harrison May Not  Be on Pats Roster, But Remains on Their Radar – After a pretty solid postseason performance by James Harrison, the former Steeler still remains a free agent but it sounds like a return to New England isn’t out of the realm of possibility.

According to ESPN’s James Fowler, Harrison is taking his time and plans on waiting until after the draft before he makes a decision to sign somewhere, although he’s yet to commit to returning to the Patriots.  Fowler reports that the Patriots have inquired during free agency, but he didn’t elaborate beyond that.

Among ways Harrison tried to get himself out of Pittsburgh, one team source said Harrison was known to sleep in a recliner chair during position meetings and snore loudly while Joey Porter would teach.

The one team that appears to be out of the picture at this point seems to be the Steelers, since as we know from last season Harrison’s biggest issue was the fact he wants to play isn’t enamored at the idea of being just a limited role player.  Some have wondered if Harrison might retire but despite turning 40 less than a month from now, he seems focused on going full-speed ahead and he certainly showed enough in his brief time in New England to prove he could be worth bringing back.

He was immovable on the edge and gave the Patriots some much-needed stability given the amount of injuries they had suffered, which is what opened up a role for him.  The only question might be whether or not they can use a roster spot on him and be able to manage him enough throughout the season to get the same type of performance he gave during the playoffs.

He’s still hitting the gym just as hard as ever and appears focused on getting ready for the 2018 season.  Whether or not he gets to make another run in New England remains to be seen.

Thanks for reading, and for all the support since we started putting this together each day. Hope all of you have a good weekend and we’ll see you on Monday.