5 years ago at 8:44 am ET
Follow @IanLogue
Posted Under: Daily Patriots Notebook

Edelman Comes Up Big – in an Important Way – Patriots wide receiver Julian Edelman is no stranger when it comes to making heroic plays on the gridiron but he recently did something else that even eclipsed all of the amazing moments he’s accomplished on the field.

According to the New York Times, the veteran receiver recently got a direct message to alert him to a comment on his Instagram page, with the user telling Edelman, “Dude, there is a kid in your comment section says he s going to shoot up a school, i think you should alert the authority.”

The comment was posted on Edelman’s photo of he and now former teammate Danny Amendola, who were both spending some time together in Austin Texas.

Edelman could have chosen to ignore it thinking the person was just looking for attention, but with what happened in Parkland Florida still fresh in his mind, he instead did the right thing and had his assistant scour through the hundreds of comments until they came across the post in question.

“I’m going to shoot my school up watch the news,” a user named its_ya_boiii_aidan wrote.

From there the Massachusetts State Police got involved, with detectives reportedly able to trace the commenter’s IP address to a town in Michigan. The person in question ended up being a 14-year old boy, who admitted to posting the threat and there were two rifles found at the boy’s residence, although the report says they belonged to his mother.

He’s since been taken to a juvenile detention center.

Kudos to Edelman for taking the message to heart and helping potentially stop what could have been yet another school shooting. Edelman’s assistant, Shannen Moen, who was the one who did the legwork, told the newspaper that the receiver is still ‘in shock” at how it unfolded, but credited law enforcement in both states for their efforts.

Pats Continue Business As Usual, Add Two More Players – While most of the discussion on Wednesday centered around the Brandin Cooks trade, the Patriots quietly continued moving forward by adding a couple of more pieces to the group that will be in Foxboro competing for a roster spot in a couple of months.

Niklas had already previously made a visit recently with the team that must have gone well. According to NFL media’s Ian Rapoport, he cited a source that New England signed him to a 1-year deal.

As for Bowanko, he spent three seasons in Jacksonville before spending last season with the Ravens. The 26-year old has a big frame at 6’6″, 300lbs and is a former sixth-round draft pick. He’s appeared in 40 games over his NFL career, which was highlighted by 14 starts at center as a rookie in 2014 with Jacksonville. He played in all 16 games for Baltimore last season, including one at center where he was snapping the football to former Patriots quarterback Ryan Mallett during a 40-0 rout over the Dolphins in Week 8. 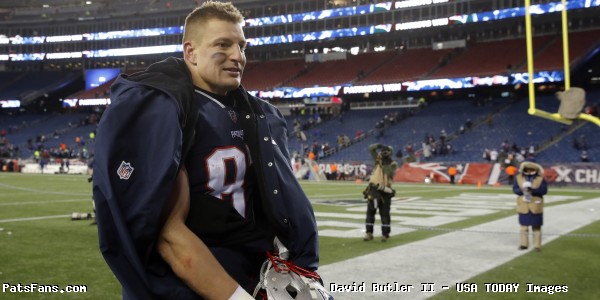 The Ravens were mum on any interest in Gronkowski/. (USA TODAY Images)


DeCosta Mum on Gronkowski Interest – With teams having said last week that they’ll inquire about Rob Gronkowski’s future, that topic of conversation has already apparently started in Baltimore.

According to the Baltimore Sun, Ravens GM Ozzie Newsome was asked about whether or not he’s engaged in trade discussions with the New York Giants about Odell Beckham Jr., or with the Patriots about Gronkowski but Newsome kept it close to the vest.

“I don’t think in 22 years, I’ve ever announced whether I’ve reached out to someone about some player,” he told the newspaper. “And I don’t think I’m starting today.”

The trade of Cooks seemingly sealed Gronkowski’s fate with the Patriots for at least another season but it appears teams will still at least take a shot at trying to pry him away. A team like the Ravens might simply opt make a run to acquire Gronkowski rather than have to compete against him, especially given the history between these two teams. Whether or not they can put a deal together sweet enough for Belichick to bite remains to be seen.

“Hunch” that the Patriots will target Baker Mayfield? – With the addition of a first-round pick that now has them with two in the first-round of the upcoming draft, we’ll likely hear a lot of scenarios in the coming weeks about who they’ll target, and Jason La Canfora already seems to believe the team will try and move up to get a quarterback.

According to La Canfora, he recently spoke to a member of the organization, who said it wouldn’t be out of the realm of possibility for Bill Belichick to do that.

When I asked a member of the Pats organization in the know if they would be shocked if Belichick moved well into the first half of the first round to land a quarterback, he responded: “Certainly not.” This individual is convinced that this Cooks trade was a mere cog in the overall machine and a piece that will end up with one of the top three-or-four rated passers in this draft landing in New England. History — recent and dating back to guys like Richard Seymour — has revealed that Belichick is rarely averse to dealing current players for future assets, and he could move another veteran plus the three picks the Patriots now hold between picks 23 and 43 to do so.

Taking it further, La Canfora says he has a “hunch” that Baker Mayfield is on Belichick’s radar, which could see the select the Oklahoma standout.

Total hunch here, but I’m thinking Baker Mayfield could be the guy Belichick targets. He’s been all about mobile quarterbacks the last few years – Tim Tebow love affair, dabbling with Johnny Football, drafting Jimmy Garoppolo and Jacoby Brissett before dealing them both. Belichick can handle the kid’s attitude and curb his wayward tendencies and he could be the best value play – especially if three quarterbacks are drafted ahead of him – and Josh McDaniels could coach him up and scheme him up and put him in positions to replicate what he did best at Oklahoma.

If Denver passes on Mayfield, I think Miami pounces and moves up to get him. Moving up wouldn’t bankrupt Miami from a draft capital standpoint. The Dolphins like Ryan Tannehill when he’s healthy, but they can’t trust him to stay on the field.

It won’t be long before we find out as the draft is now just three weeks away, with round one beginning on Thursday, April 26th.

READ NEXT:
What Should the Patriots Do With All of This Draft Capital?
Posted Under: Daily Patriots Notebook

By: Steve Balestrieri
But we need to continue to work to do things better on our end. Then as it relates to our specific opponent. There's no magic…
5 hours ago