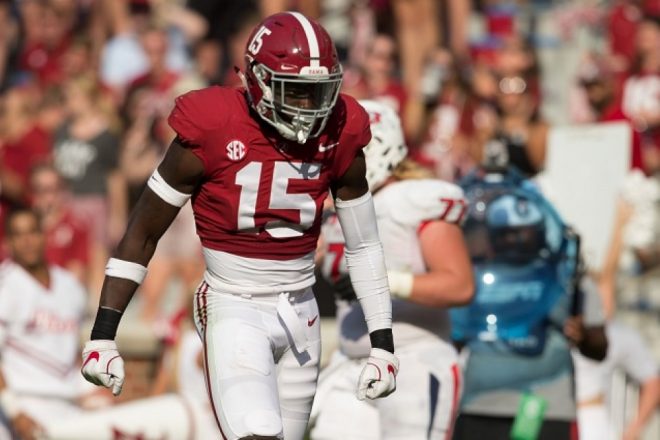 Harrison Is Another Bama Safety Destined For Big Things

The Patriots are set at Safety with all three starters returning in Devin McCourty, Pat Chung and Duron Harmon. We say starting because all three play enough snaps to be considered starters. But in August both McCourty and Chung will turn 31(13th and 19th respectively) and it isn’t too soon for the Patriots to begin looking for possible prospects as replacements.

Alabama is a place where Bill Belichick’s buddy Nick Saban cranks out NFL ready players, especially on their defense. In recent years the Crimson Tide has produced Eddie Jackson, Clinton Ha-Ha Dix, and Landon Collins to make their mark on the Pros.

This season’s crop has two that should be gone off the draft boards by the 2nd round. The Patriots have a thing about selecting safeties early in the draft and with Harmon facing possible discipline from the league over a recent incident in Costa Rica, they could be in the market again. Although they have three other safeties in Nate Ebner, Brandon King, and Jordan Richards, Ebner and King are special teamers and Richards has filled in at safety but not very well (see Super Bowl LII). David Jones is on the practice squad.

Ronnie Harrison from Alabama is another excellent safety from the Crimson Tide program. He possesses great size (6’3, 216) and speed. Harrison was a high school quarterback, so he understands well what the offense is trying to do. He is versatile and has played both safety spots but he’s a better fit as the strong safety in the box due to his issues with the changing of direction and range. But as an overall safety? There are few better in the country.

He has plenty of physicality, athleticism and good instincts to be an impact player on Day 1. Bama moved him around but he was at his best when they had him attacking the line of scrimmage. He does a great job of recognizing plays and attacking downhill.

He’s outstanding in run support, filling the holes quickly and a violent, punishing hitter in the trenches. He led the team with 74 tackles, (43 solos) and seven passes defensed with three interceptions.

Harrison has the size, speed and physicality to play the linebacker role in the Patriots “Big Nickel” defense as well as their in the box safety.

– Can play a bit out of control

– Doesn’t always wrap up, goes for the big hit

– Range is good but not elite

Harrison could immediately vie for reps and let the coaches see what he can do. They’ll spell Chung and McCourty for a bit and let the rookie get his feet wet in the NFL. As we mentioned above, he could be used as the linebacker in the Patriots “big nickel” look on defense.

Yes, in Year 2 with a bit of experience, he could push Chung for his roster spot. Or perhaps Harmon.

Conclusion:
NFL.com’s Lance Zierlein in his profile wrote that “Combination safety with all the size and athletic traits you could hope for in a safety. Harrison is a fluid athlete with few athletic limitations and has the ability to fit into a variety of defensive schemes. His penchant for flying in shoulder first will need to get cleaned or risk giving up missed tackles and big plays. Harrison’s physical approach and urgency in run support gives him a chance to start early, but his potential in coverage and athletic ability give him a chance to become a Pro Bowler.”

Harrison isn’t without a few issues that will need to be cleaned up. He doesn’t have great range or change of direction which could limit his use as a single high safety. He sometimes goes too much for the big hit and doesn’t wrap up which can result in a big play or broken tackle.

But as a strong safety in the box, he’s outstanding in run support and he’ll be just fine covering tight ends close to the line. He could easily gain another 5-10 pounds without any loss of speed and be the hybrid safety/linebacker the Patriots like to use in their big nickel packages. His physicality, and instincts are off the charts. By Year 2, he’ll be not only pushing for starter reps but could become an impact player on the defense.

While safety isn’t a position of need right now, the Patriots could find themselves in a dilemma.  If Harrison is on the board, the team could be hard-pressed to pass him up. He is a potential Pro Bowler and will be a very solid player at the next level. Zierlein compared him to a young Adrian Wilson and that may be the best description of him yet.

His game against Colorado highlights from Felipe Vierra can be seen here: