A happy April Fool’s Day and of course a Happy Easter to all our readers out there, for our Jewish friends, Happy Passover “chag Pesach sameach.”  From all of us here, we hope you enjoy the day with family and friends, healthy and safe.

Quick Hitters: Boston 25’s Butch Stearns had an informative sit down with former Patriot LT Nate Solder where the Giants recent addition spoke about how tough it was for him to leave the Patriots, calling it “bittersweet.”

“When I think of my team, I think of the Patriots,” he said. “I am transitioning into a new team, a new chapter in our lives. I think we will always be part of this community. We will always be part of the Patriot family because we have two championships here. We’ve done a lot here. Now, this is a new chapter and we’re going to be Giants. It’s exciting.”

So there is a racehorse name “Gronkowski” named after the Pats TE that is going to run in the Kentucky Derby? I can think of one person who will be betting heavily on that horse.

The Johnny Manziel story is still out there with the Patriots reportedly having another meeting with former Browns quarterback and the rumors continue to persist that the team will sign him to back up Tom Brady in 2018.

I’ve made my feelings on his fit here before but the Patriots and Bill Belichick have always gone to the beat of a different drummer. It would likely entail changing the offense to fit his skill set. Would he be exciting seeing running around the preseason field against a lot of players who won’t be on NFL rosters in September? No doubt. But I’ve never been a big believer that he’d have an impact in the NFL. So, we’ll see.

A lot of people have been asking about the possibility for the Patriots to trade for the Giants Odell Beckham Jr. Reportedly the Giants are asking for not one but two first-round draft picks for the talented WR. That’s far too rich for the Patriots to afford.  So in a trade? Who would you trade, Cooks? It is unlikely the Giants would go straight up and would want more consideration. Gronkowski? That is a lot to pay for a WR who is in the last year of his contract and will want to get paid and paid big. And for one who doesn’t know the offense. But most importantly of all, it isn’t a position of need. Far too expensive for a one-year rental.

Right after the Super Bowl, everyone was looking at where the team would be headed, personnel-wise in 2018. Almost universally everyone thought that the Patriots would either release Dwayne Allen or restructure his deal from his owed $5 million in 2018. Well, we’re less than a month away from the draft and Allen’s contract remains. Chalk that one up to a big surprise this spring.

Gronkowski on the Trading Block? Rumors Persist:
Another hot take item has been the “will he or won’t he” status of Pats TE Rob Gronkowski. His agent Drew Rosenhaus has stated that his client still hasn’t come to a decision on whether to play in 2018 and beyond. Which immediately opens up the rumor mill on whether it is a ploy to get more money for a new deal or if he’s seriously considering hanging it up and heading off to a new career as an action film star and WWE personality. 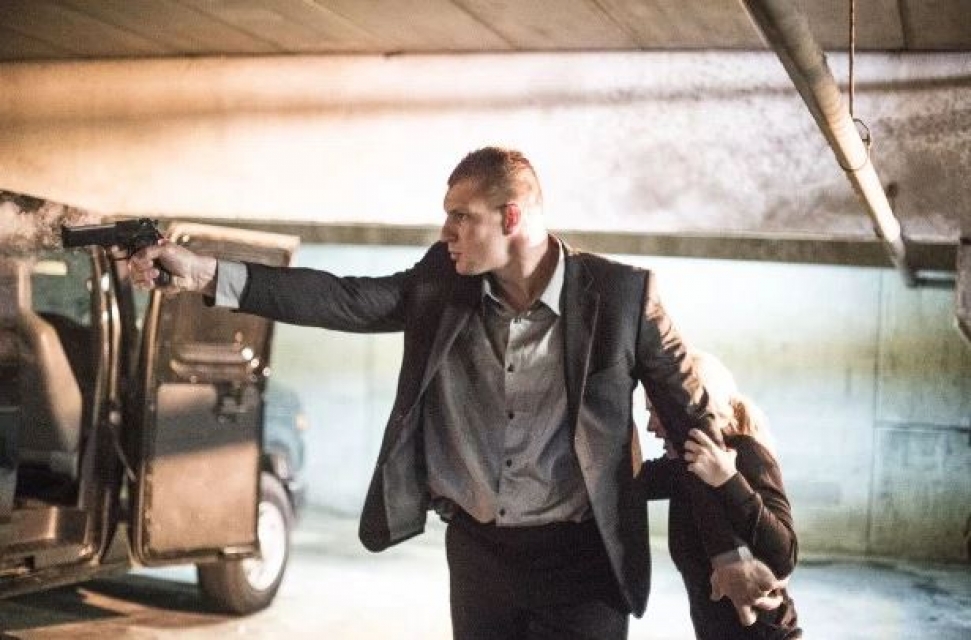 If he is still truly waffling on retirement, then a trade scenario becomes a very real possibility. With Belichick, if you’re not 100 percent in…you know the rest. So this may not be as far-fetched as previously thought.

But Robert Kraft did say that he’s seen Gronkowski working out there after hours which is a good sign that he’s preparing for the offseason workouts that begin on April 16. Those will be interesting to see who is there and who isn’t.

But regardless, it won’t be a shock to see the team dip into the draft for an eventual replacement for Gronkowski who has two years left on his deal.

Belichick Losing the Locker Room? Perhaps Not After All:
In the aftermath of the Malcolm Butler interview with SI where he stated that he felt the Patriots could have won the Super Bowl had he played and wanted to confront the coaches during the game…but didn’t. The article opened up an entirely new conversation about the Patriots, their locker room, the recent free agent losses, and how “no one wants to go there in free agency”. There was also a renewal of the take that there is a deep rift in the locker room with Belichick needing to “clear the air” with the players. Not so fast.

NBC Sports Mike Giardi spoke with a couple of players offline about Butler’s interview and the answers weren’t what one would expect, given the recent storylines.

One current player said “we all wished it would have worked out better” but he (Butler) “should have focused on what mattered those 2 weeks.” Another player told Giardi “we didn’t like the decision but it wasn’t without merit.”

And Giardi added the following… worth a look and to ponder. 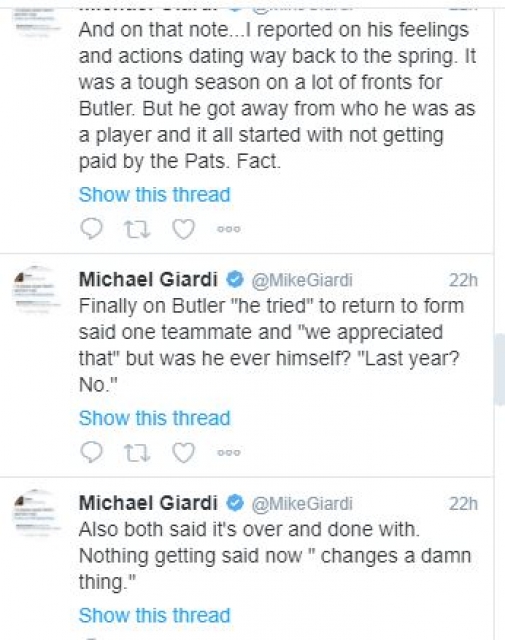 Sounds quite different from a fractured locker room but we’ll see. Belichick, at the league meetings and at various Pro Day workouts said he feels the energy of the team building phase of the offseason.

Kraft Doubles Down on Support of Belichick:
Patriots owner Robert Kraft was asked about the Malcolm Butler question at the league meetings and had some very telling comments. He, like many others, had questions about the benching of Butler. But unlike many other meddling, non-football people owners, he spoke of trust.

“With my fan hat on, you can come up with all kinds of reasons or things, but here’s the deal: We in New England are privileged to have, I believe, the greatest coach in the history of coaching,” Kraft said. “We’re involved in a number of businesses in our family – we’re in 95 countries in the world – and we try to encourage to have good managers and we want them to be bold, we want them to take risks. Sometimes they work out, sometimes they don’t.”

“ I have faith in Bill as a coach that I don’t think there is anyone who has the football knowledge and expertise combined with understanding personnel – no one can merge those two worlds. He’s done pretty well for us over the last 18 years,” which was an understatement.

“So, as a fan, I can question some of the moves. As someone who is privileged to be the owner of this team, I encourage him to keep going with his instincts and doing what he thinks is right. There is no doubt in my mind, even if he made an error – and this is true with any of our managers – that if they’re doing it for the right reason, then I support it 100 percent,” he added.

“I’ve never had one instance in the 18 years where Bill hasn’t done what he believes is in the best interest of our team to help us win games.”

Former Bills Coach Rex Ryan Expects Buffalo to Make a Push for the #2 Pick:
The Buffalo Bills under new coach Sean McDermott made the playoffs last year for the first time since 1999. It was a testament to McDermott’s coaching that Buffalo made the postseason despite having the 26th rated defense and the 29th rated offense.

But the man McDermott replaced, Rex Ryan, believes the Bills may make a move to trade with the New York Giants to move up to the #2 spot in the NFL Draft looking for their franchise QB. And Ryan already thinks who it should be.

In an interview with the MMQB, Ryan said, “I do expect them to make a huge offer to the Giants and move up to No. 2. And if I was them, I would take Josh Allen. You need to have a guy to throw the ball in windy conditions, and no one has a bigger arm than that kid.”

Moving up won’t be cheap but if the Bills believe that their guy will be gone then it is a no-brainer. They’ve been searching for that elusive franchise QB since Jim Kelly retired.

Dolphins Made the Right Move in Adding Quinn for Suh:
The Miami Dolphins had a cap hit with Ndamukong Suh for over $26 million in 2018. After paying him $60 million, he never really transformed the Miami defense, especially in the running game as he was envisioned.

They added Robert Quinn whose cap hit of $14 million is much more doable and he brings the element of a game changer to the table as a player out on the edge who can get to the QB. Miami is moving him back to his natural position as a 4-3 defensive end and teamed with Cameron Wake, Charles Harris, and Andre Branch, not only will Miami be able to generate a lot of pressure on opposing QBs, Quinn, in this defense, should have immediate double-digit sack potential.

Jets Sign RB Thomas Rawls From the Seahawks:
The New York Jets have found a very depth option behind Bilal Powell at the running back position and have signed former Seattle Seahawks back Thomas Rawls. Terms were not immediately announced.

Rawls was an undrafted running back out of Central Michigan in 2015 and burst on the scene when he replaced an injured Marshawn Lynch for Seattle.  His downhill, physical running style quickly got him noticed. The 5’9 dynamo averaged 5.6 yards a pop in 2015 and produced 830 yards on the ground that season.

But his all-out physical style has taken a toll, he’s been unable to stay on the field the past two years. But backing up Powell, he should be a dynamic #2 option. Good move for the Jets if Rawls can stay healthy this year.