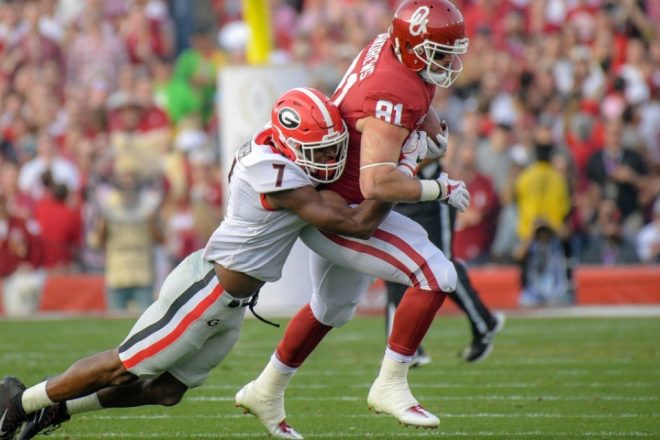 Carter Has a lot of Potential Upside in the Pros

In an earlier post, we wrote about the Patriots issues on the edge in 2017. They had too many losses to work around because of free agency, retirement, and injury. Others that they brought in, that just didn’t work out (Kony Ealy, Cassius Marsh), added to the issue.

With some players getting back from injury this year, things should automatically look up from 2017. And the Patriots did address the position during free agency. The team signed Adrian Clayborn this spring which immediately helps.

Hightower, Rivers and Langi return, they’ll join Trey Flowers, Deatrich, Lee, and Adam Butler but they could really use another young edge player which could facilitate moving Hightower and Langi back to linebacker. That would be the best thing, as they really need some help at Inside Linebacker.

At the outside linebacker position, they’d have Marquis Flowers and Kyle Van Noy, as well as Derek Rivers, returning. They could still shift either Hightower or Langi back on occasion to the outside but would still require some needed depth and athleticism at the position and there are players available in the draft.

Lorenzo Carter from Georgia is an intriguing prospect that played in the SEC. He’s one of those players that may become a better professional than he was a college player. After being one of the most highly recruited players in the country, his college football resume never really materialized the way most thought it would.

Carter has an incredibly long and rangy frame (6’6, 250) and played as both as a hand in the dirt defensive end and as an outside linebacker standing up. He had some experience covering tight ends and backs and even at times receivers. Although he generated a lot of quarterback pressure, Carter never was a big sack guy getting just nine and a half combined sacks in his last two seasons.

In college, he set the edge well using his athletic ability and holding the containment in the running game. But he’s not solidly built in his lower body and can get pushed around if he allows blockers to get inside of him. Because of that, at the NFL level, he’ll probably be more of an outside linebacker than defensive end.

– Has a knack for causing fumbles

– Not great in coverage

– Can be pushed around in power running game

– Needs to add bulk especially in his lower body

Carter could immediately play in the sub-packages as an outside linebacker. He’ll have too much trouble setting the edge in the pros as a 4-3 Defensive end. If he’s used there, he’d be strictly a subpackage pass rusher initially. He can cover a bit but also rush off the edge as a blitzer.

Yes, in Year 2 if he can build up his leg strength, he could see more work as a stand-up defensive end.

Carter could replace an STs guy like Nicholas Grigsby and take his role on STs.

Limited, but the team will probably use him on some of the coverage units taking advantage of his speed and athleticism

Conclusion:
NFL.com’s Lance Zierlein in his profile wrote that:

“Carter was a five-star prospect and one of the most heralded players in the nation when he was recruited by Georgia but he never made the impact expected of him as a Bulldog. However, Carter played with increased toughness and confidence this year and his NFL potential began to reassert itself once again. Carter is an outside linebacker in a 3-4 or 4-3 with sideline-to-sideline range and the tools to become a productive edge rusher in sub-packages. He needs to add more bulk, but he is a future NFL starter.”

Carter is a better fit at Outside Linebacker and has the skills to rush the passer off the edge where his speed and agility can be brought to bear. He’s good but not great in coverage and tended to give too much of a cushion but that happens with players that aren’t asked to do it very much.

Carter is a versatile player, something the Patriots value highly in their players and he was that guy for the Bulldogs. He could be found, rushing off the edge as a Wide-9 Defensive End, dropping into coverage as a WILL Linebacker and moving all around the formation. He doesn’t have great instincts and is more of a read and react kind of player but he has the athleticism and speed to be a very productive player at the next level.

I know he showed some good power and strength in setting the edge in college but the pros are different. His legs look a bit spindly and that could be an issue until he packs on some needed muscle. But his frame may max out quickly and it could hurt his athleticism if he bulks up.

Carter is going to be one of those boom or bust kind of prospects. It is easy to become enamored with his obvious physical skills, running a 4.5 in the 40-yard dash but he chose not to run the bigger barometer for a change of direction and agility which is the 3-Cone Drill. But for all his physical tools, it didn’t translate into production. He produced just 9.5 sacks and 14.5 tackles for loss in his last two seasons combined in Georgia.

Carter will be an intriguing prospect as we stated above because some defensive coaches will want to be able to channel that athleticism. We all saw that in the Orange Bowl with the blocked field goal attempt.

He’s mainly thought of as kind of an end of the second or early third-round prospect in most places. It may be a good place to pick him up. We know Bill Belichick saw him and the rest of the Georgia linebackers up close and worked them out during their Pro Day.

And his 2018 Rose Bowl Game against Oklahoma highlights from Cut Up Corner can be seen here:

By: Ian Logue
Heading into Monday night's match-up, if ever there was a sense of urgency, it's probably safe to say there needs to be a heightened state…
47 mins ago