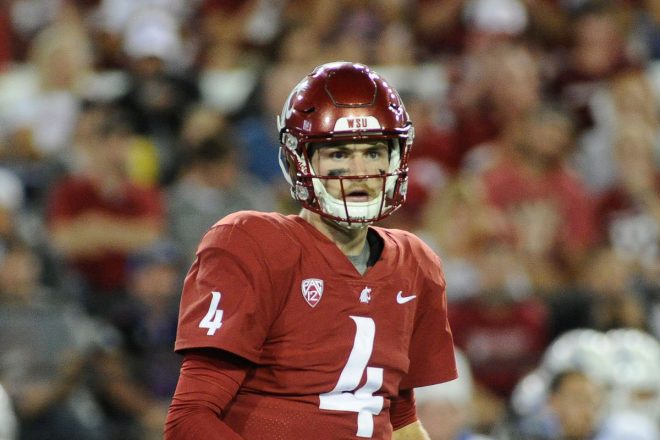 Falk Has a Quick Release, Pocket Presence, and Accuracy

The Patriots, after trading Jimmy Garoppolo at the deadline last season are back looking for an eventual successor to Tom Brady. While Brady showed no signs of slowing down last season, he’s going to be 41 this August and it is just a matter of time before he finally begins to show his age.

Brian Hoyer is just a journeyman, backup and while they can rely on him to hold the fort down for a week or two in an emergency, he doesn’t have the skill set or the longevity to be the solution. So, after trading Jimmy G. because they couldn’t afford both he and Brady in 2018, they’re back to square one.

Everyone is expecting the Patriots to dip into the draft this year to find a possible Brady succession plan. But Belichick and Caserio are under no compulsion to do it this year. If they don’t like any of the quarterbacks this spring, they can roll the dice and go with Hoyer for another year but it does put off the inevitable and then, whoever they do draft would lose out on valuable learning time and getting a comfort level in the offense.

Luke Falk from Washington State, is, in our opinion an intriguing option for the Patriots. He’s got the size (6’4, 225-pounds) that they like and at times he has the look of a polished finished product, delivering dimes all over the field, under heavy pressure. But there are other times, where he’s maddeningly inconsistent, where he seems to process things too long and throws almost nonchalantly into coverage.

Falk has a good but not great arm, and can the short, intermediate and deep throws down the field. He has shown that he can put good touch on the ball and is very accurate. The ball comes out of his hand quickly and has very good pocket awareness and can slide in the pocket to buy time.

One thing he’ll have to learn is to take snaps under center, something Mike Leach’s offenses at WSU never do. He does a good job at times manipulating the defense with his eyes and can look a safety off his throws. Despite his perceived lack of arm strength, Falk isn’t afraid to throw into tight windows.

– Been beat up with no protection

– Footwork needs to be worked on.

Falk will be under no rush to hit the field. He should be the third QB on the roster and focus on learning the offense, trusting in his offensive line, which was bad at WSU.

Yes, in Year 2 he should be ready to challenge Hoyer for the backup job and start getting a handle on how to run the offense quickly and efficiently.

No one, they’ll probably keep three QBs on the roster again and for this year, Brian Hoyer will be the backup

Conclusion:
NFL.com’s Lance Zeirlein in his profile wrote, “Tall, rhythm passer with good natural accuracy and years of quality production who is much more comfortable working the perimeter and against man coverage.”

He is a dyed in the wool, unabashed lover of all things Tom Brady. His teammates joke about how he tries to emulate everything Brady does, down to his film study and preparation. Falk even bought the TB12 book and said that he was trying to drink more water and eat better. He could do a lot worse in his choice of who to pattern himself after.

Falk is prepared to land anywhere but one gets the feeling where he’d really like to end up. “If I landed in New England, I would just be a sponge with everything that he’s [Brady] done. He is the greatest of all-time, there’s no doubt about it. It would be a really cool experience.”

And Falk isn’t ready to assume the mantle of a full-time NFL starter, so holding the clipboard for Brady and soaking everything up and learning from the side of your idol may not necessarily be a bad thing…at all.

Falk has some things to work on in his game, and working with Brady and Josh McDaniels may be a great match. He has the talent to get his foot in the door. Can he take his game to the next level and beyond like Brady has done? That’s the $64,000 question for the Patriots and Bill Belichick.

But he’s a very good developmental prospect who has a high football I.Q. was a four-year starter on his college team and has very good accuracy. Falk has good pocket awareness and will be a nice fit with the Patriots if the situation avails itself and he’s taken in this upcoming draft.

Falk has a nice highlight reel tape from Cade Stone and can be seen here: