5 years ago at 8:44 am ET
Follow @IanLogue
Posted Under: Uncategorized

It’s a quiet news morning on this Wednesday as we close in on the weekend, and here’s a quick rundown with today’s top stories.

Devin McCourty Started Working His Phone to Help Try to Bring His Brother to New England – The addition of Jason McCourty adds a solid veteran defensive back to their secondary, but the story behind how it happened before the trade came to light after the newcomer filled everyone in during his conference call on Tuesday and it was pretty cool to hear about how it came to fruition.

“So I got the call that I was going to be released,” Jason told the media on Tuesday. “I told him and told my wife and we were all doing us. Then I left to go workout and about an hour later I get a FaceTime from Dev and he’s just like – well as soon as I got released he showed me he texted Flo [Brian Flores] and was just like, ‘Man, how do we get Jason to New England?’ Dev said, ‘I’m going to text Bill [Belichick],’ so I think he hit up Bill about it, but I think at that point the trade was already in the process. Then I get a FaceTime from Dev while I’m working out and he was just like, ‘Yo, don’t worry about it. We’re going to trade for you. You’re coming to New England.’ I was just kind of looking at him because I thought he was joking around.”

“Probably about five minutes later I get a call from John Dorsey, the GM in Cleveland, and he’s like, ‘I got some news for you. We’re not going to release you, so we’re going to trade you to New England.’ It was, I guess, a roller coaster type of day.”

It’s obvious that the team holds a high regard for McCourty’s opinion and it’s apparently no secret that there was interest on the part of Bill Belichick in Jason based on how things played out previously, despite the fact he didn’t end up here.

While McCourty still may have been on Belichick’s radar, fortunately, they took advantage of this opportunity and it’s a good first step to help a group that underperformed last season and just lost Malcolm Butler and Johnson Bademosi to free agency.

Now that he’s here, he’ll just have to build some chemistry and establish himself with his new teammates, which he said shouldn’t be an issue.  Jason admitted that visiting his brother over the years while they’ve experienced success has already helped him meet many of them, so he expects it to be an easy transition.

“Just over the years of following my brother and the team, I walk into this locker room already having a really good idea of a bunch of the guys on the roster,” said McCourty.   “So that, I think, will help for an easier transition.  Over the years of going down to the Super Bowls when Dev goes or coming to visit him at different points of the season, I’ve really gotten a chance to meet a lot of the guys.” 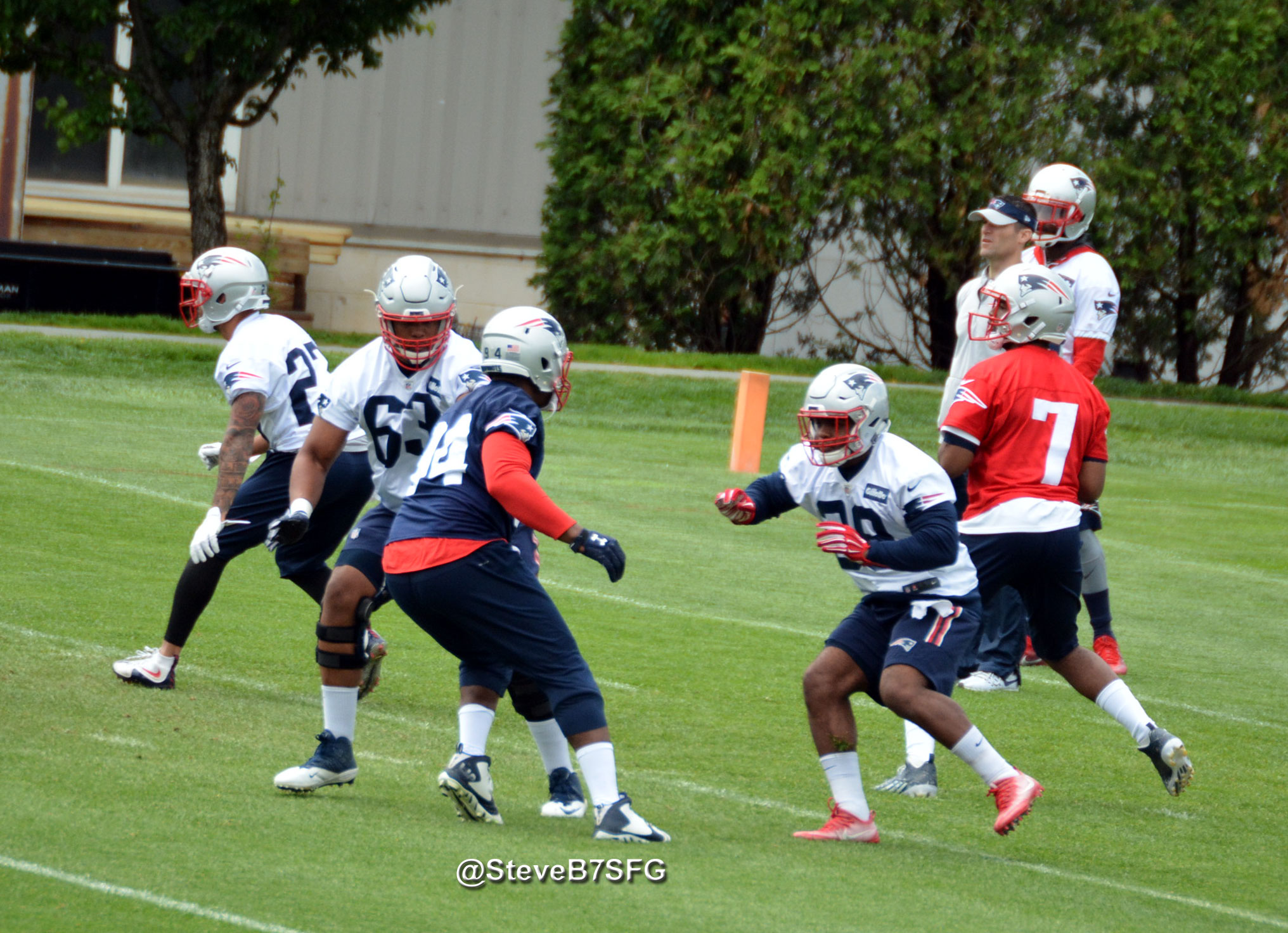 Garcia Cleared to Play Again – Tony Garcia’s mysterious disappearance during training camp last season was one of the more curious stories after the rookie ended up on the non-football illness list, but it sounds like he might be headed in the right direction.

Reports recently revealed that Garcia’s situation was more serious than many may have thought, with the second-year offensive lineman having dealt with blood clots in his lungs.  He’s since reportedly lost about 40 pounds, which is obviously significant for an NFL offensive lineman.

That’s left the team with some uncertainty, but according to the Boston Herald, Garcia’s finally able to start working his way back after being medically cleared to get back to work.

If Garcia can get back to playing at a high level, that would certainly give the Patriots some much-needed help up front. Prior to his selection in the third round, Garcia was considered to be the 2nd best OT in the draft in Pass Block Efficiency.

The Patriots select Antonio Garcia, OT from Troy, with the 85th pick. #NFLDraft

Garcia seemed excited at the prospect of getting back to work after announcing the news on Instagram yesterday, which is a positive sign. As a result, it should make for a good storyline to follow and it should be fun to see his progression by the time training camp begins.

Slater is Back – After making a visit to Pittsburgh, it seems Matthew Slater realized playing in New England is better than being a Steeler and fortunately, he’ll be sticking around for at least a couple of more seasons.

According to Mike Reiss of ESPN, Slater reached an agreement on a 2-year deal to return to the club on Tuesday.

That’s good news as it ensures they’ll have their special-teams leader for the foreseeable future, but more importantly they’ll have the guy who is the emotional and spiritual leader in their locker room.

You’ll see at the end of the video that Slater is the guy who breaks them down each week. Veteran leaders are important to any NFL team, and it’s great to see that the Patriots will have Slater back to keep his terrific career going for a little longer.

McClellin Believes He’s Done – After being released on Monday due to a “Failed Physical” designation, Shane McClellin appears to be pondering life after football.

McClellin, who missed last season after being sidelined with two concussions, revealed that his days playing football may be done.  According to the Idaho Satesman, when asked if he’ll continue to play, he texted the newspaper, “medically, I just don’t know if I’ll ever be able to again.”

He seemed to be relatively positive following his release, Tweeting a “thank you” to the team and the fans for his time with the Patriots.

(Be sure and join our email list below, which includes the latest Patriots news and hand-selected articles from all the local media sources sent to you each morning.)

READ NEXT:
After Initial Free Agent Frenzy, What’s Next For the Patriots?
Posted Under: Uncategorized