It has been a long couple of weeks here since the Super Bowl but the Malcolm Butler story just won’t go away and while we may never have the complete story, fans continue to chime in on it. Was the Butler benching in SB LII “Bill Belichick’s arrogance” as some have repeatedly stated or was there something deeper there? Did Butler do or say something that would have caused him to sit?

That is something the Patriots will never say, other than what Belichick said, which was it was a football decision, made in the best interests of the team. Which can mean many things. It is time to let it go. Regardless of the decision, it is water under the bridge and the Eagles made more plays two Sundays ago and it is on to NFL Combine and Draft. But for the sake of conspiracy theorists, I’d be inclined to believe the latter more than the former…

Happy Birthday to the Man Who Originated the “Gronk Spike”:

If you ever wondered about where spiking the football originated from read on… Back in the 1960s, many players, including several stars, (Frank Gifford of the Giants and Paul Hornung of the Packers) would celebrate a touchdown by flinging the ball into the stands. The NFL cracked down on this in 1965 (even back then) by fining players $500 if they tossed the ball into the stands.

The Giants signed a speedster in 1965, Homer Jones from Texas Southern. A 6’2, 220-pound track star to play wide receiver. Jones wanted a celebration of his own but didn’t want to pay $500 bucks either. So after a touchdown, he started a trend of throwing the ball hard on the ground. Asked what it was, Jones called it “a spike.”

Back before the merger, the Patriots games in the AFL were carried on NBC. The Giants in the NFL were all carried here in New England on CBS. As a youngster, Jones was one of my favorite players to watch in 1967. And what a season he had. In the run-heavy era of the ‘60s, Jones had 49 catches for 1209 yards for an incredible 24.7 yards per catch and an NFL leading 13 touchdowns receiving.

Giants quarterback Fran Tarkenton, said throwing to Jones was like hitting a man on a motorcycle with a butterfly net.

Knee injuries curtailed what could have been an unbelievable NFL career in 1971, but Jones was electric in the open field. His career average of 22.3 yards per catch is the NFL’s best for any player with 200 receptions or more.

Today is Jones’ 77th birthday, in an interview a few years ago, he said he regretted ever doing the spike. Patriots TE Rob Gronkowski would probably respectfully disagree. Happy Birthday to #45. 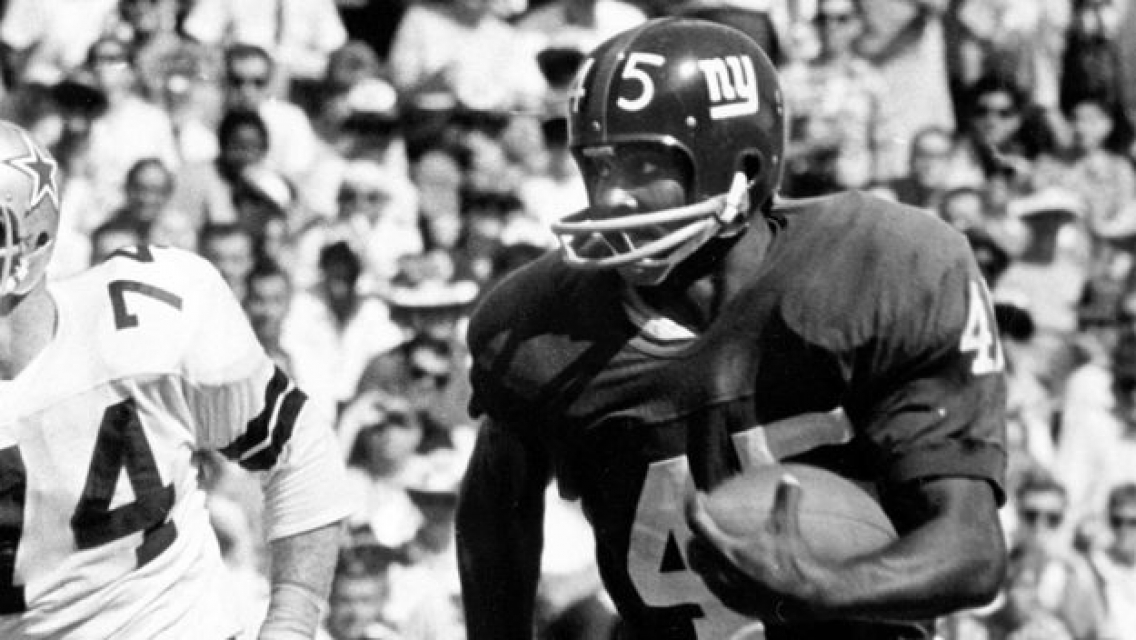 After the Colts-Josh McDaniels fallout, Indianapolis hired Frank Reich as their new head coach. And one of Reich’s first hires was to New England’s assistant STs coach Ray Ventrone.

“Bubba” Ventrone was an 11-year player in the NFL and spent the past three seasons as the Patriots assistant STs coach. The Colts will be looking to improve their STs by grabbing a coach from NE who have one of the better STs units in the league.

Who Will the Patriots Draft at QB This Season:

Benjamin Franklin once wrote, “In this world, nothing can be said to be certain, except death and taxes…” well add to that Ben, the Patriots drafting a QB. The Patriots draft one every year, but this one better be a good one, someone that takes over for Tom Brady once #12’s career winds down.

The team traded Jimmy Garoppolo to the 49ers this season at the deadline and now with Brian Hoyer as the backup, they’ll need to look to the future. But finding a capable backup to Brady isn’t the option anymore. We all know Brady’s age so this is must be someone they feel can lead them to continue to win once Brady decides to hang it up.

So who is out there in the draft in 2018? Forget about the Baker Mayfield, Sam Darnold, and Josh Allen call, they’ll be gone in the top of Round 1, long before New England picks. A couple of names to keep an eye on are Oklahoma State’s Mason Rudolph, Washington State’s Luke Falk, Western Kentucky’s Mike White and Richmond’s Kyle Lauletta from a Patriots perspective.

We’ll look at them in the upcoming draft series after free agency but one guy who they pick with their top draft choice is Lauletta. Forget about all the lacrosse stuff, yes he and BB share that, but he has the look of a QB that would thrive in this system.

Schuplinski A Key Coach to Watch, For the Next QB Taken:

Another overlooked part of the McDaniels remaining in New England is the retaining of assistant QB coach Jerry Schuplinski who was rumored to be heading to Indy along with McDaniels. Now, Schuplinski, a close friend of McDaniels is opting to remain too.

Mike Reiss of ESPN penned an interesting piece about the role of Schuplinski mentoring both Jimmy Garoppolo and Jacoby Brissett and will likely mentor whoever the Patriots draft this season.

No Mulligans, Now Belichick “Should’ve Drafted Garoppolo in Round 1:

My, my, my (Joe Kenda voice), how quickly the worm turns. The latest idea making the rounds over on social media was that Bill Belichick screwed up by not taking Jimmy Garoppolo in the first round of the draft back in 2014. The feeling is, if he had, then Garoppolo, being a first-round pick would’ve been under the Patriots control for one more season.

First of all, isn’t it amazing how Belichick lasted this long as the Patriots coach because so many of his decisions have come under such scrutiny? How many times have we heard or read, “GM Bill is hurting Coach Bill with bad decisions.” Well, now we have this one. And it isn’t recent, this particular story began circulating back in mid-August I believe.

Just as a reminder, when the Patriots drafted Garoppolo, the talk was that they “reached” for him and that he’d have been available later in the draft. But in actuality, even if you could peek into the crystal ball and look back and ahead, they would still be in a position where they’d probably be doing just what they did. Brady, who led the league in passing in 2017 and threw for 505 yards in the Super Bowl, doesn’t look like a guy getting ready to go over the cliff anytime soon. What was Bill thinking back then?

We’ve been exploring the Patriots own free agents here on PatsFans.com but we’ll be exploring some other issues that the team will have to address if they are to return to represent the AFC again in Super Bowl LIII. Some upcoming articles to look for are:

Vontae Davis Leaves Buffalo Without a Contract with the Bills:
Although the Buffalo Bills hosted free agent cornerback Vontae Davis, the first visit that Davis attended, he left without a contract. It was then reported that Davis then visited Cleveland and spent some time with the Browns.

This is probably nothing more than Davis seeing what is out there in terms of Free Agency cash that teams will throw around before making his decision. Which is a smart move by the player as he’s under no rush whatsoever to make a decision quickly.

Davis was released prior to the 2017 NFL season ending so he doesn’t have to wait for the beginning of free agency to sign anywhere. He could get locked up with a team early and prepare for the NFL season whenever he’s ready.

Davis will be 30 years old this year and was a Pro Bowl corner with excellent cover skills in 2014 and 2015. But he’s missed significant time due to injury the past two seasons. Many teams may want to give him a one-year “prove it” type of deal to see if he’s healthy or he’s beginning to fade, including the Patriots.

Dolphins Contribute $100K to Stoneman Douglas Fund:
The Miami Dolphins made two payments of $50,000, to the GoFundMe page for the Stoneman Douglas school to help put the donations over $1,000,000 in just two days of being active. It was explained that the Dolphins had to make two donations because the maximum allowed by the page to accept was $50,000.

Soon after the Dolphins gesture, donations began pouring in from around the world. According to the Miami Herald, over 16,000 people have donated to the page.

“Donations raised here will be used to provide relief and financial support to the victims and families of the horrific shooting,” the fund’s organizer said. In a separate donation, Dolphins coaches donated $17,500 to the family of Aaron Feis, the assistant football coach who gave his life, shielding students from the psychopathic gunman who attacked the school.

Jets Have the Cap Space and Expected to Chase Cousins, Perhaps Butler Too?
The New York Jets have an estimated $73,000,000 in salary cap space for 2018 and they’re expected to make a serious run at Washington QB Kirk Cousins as soon as free agency opens. It may not be as far-fetched as some people believe at first glance.

With that much cap space, they can not only snag Cousins but a number of players who can help support Cousins and give him enough weapons to make the Jets relevant again. Another potential selling point is the big market NYC area for Cousins to play in as well as the fact that they can point to the way that the Jets played for Coach Todd Bowles right up until the end of the season. The Jets players believe in Bowles and have bought in.

Another rumor has it that Patriots free agent cornerback could possibly be going to the Jets. Can you imagine the hype for the two meetings this season if both Cousins and Butler end up with Gang Green in 2018? That would immediately make the two meetings even bigger than they normally are, regardless of team’s records.