5 years ago at 5:00 am ET
Follow @IanLogue
Posted Under: 2017 Patriots Postseason 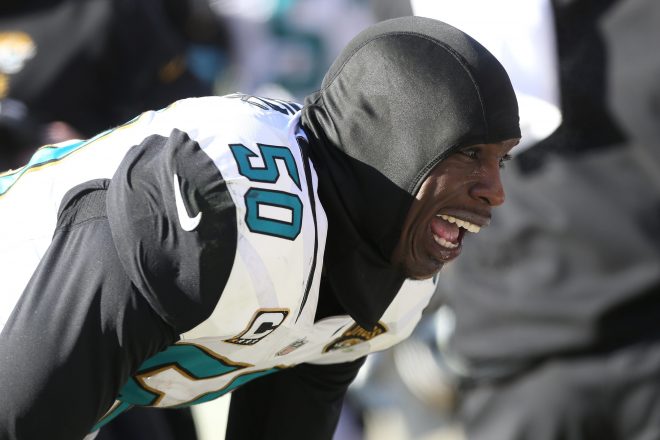 Pittsburgh came into Sunday’s game against Jacksonville and seemingly played like a team thinking more about Bill Belichick and Tom Brady than they were about Doug Marrone and Blake Bortles – and it cost them.

The Steelers made some questionable clock management decisions down the stretch but it was the damage the Jaguars managed to do long before then that ultimately started Pittsburgh’s offseason early. Now they’ll find themselves as spectators as the Patriots season continues since there will be no rematch, and it will be Jacksonville who will replace them in the AFC Championship Game this Sunday at Gillette Stadium.

The Jaguars looked completely different Sunday than the one that managed just 10 points in a 10-3 win over the Bills during Wild Card weekend. While many believe the Patriots road to Minnesota just got a little easier, there are still a few reasons why there should still be plenty of concern about that team heading into this weekend.

1) Jacksonville’s speed on defense is intense – When you look at Sunday’s game against Pittsburgh, one of the things that stood out is the fact that the Jaguars speed on the perimeter is probably one of the toughest New England’s faced all year. Pittsburgh had a tough time getting outside and their defensive line did a good job stopping them up front. It creates an interesting problem that we’ll have to see how the Patriots ultimately choose to attack them.

2) They have an opportunistic secondary – Another thing that stood out was the fact Jacksonville was consistently around the football, and that’s a trend that after looking at several games has been something they’ve been great at all season, which explains why they finished second in the NFL in interceptions with 21. After seeing the success teams have had against New England in man coverage this season, Jacksonville may be one of the more difficult ones they’ll deal with and they’re a team that’s done a good job creating turnovers and either scoring on their own, or putting their offense in great position to capitalize. It’s going to be a solid challenge, and the Patriots will need a repeat of Saturday night where they avoid turnovers and remain patient in order to avoid an upset.

3) The Jaguars have a strong ground game – While he did suffer an injury early on, that didn’t stop Leonard Fournette from rushing for 109 yards on 25 carries, including three touchdowns. Jacksonville has an incredibly physical offensive line which played one of the biggest factors in their success all season. That was pretty evident Sunday as the Jaguars had success with play-action in their passing game, which has also helped in Blake Bortles’ production. New England’s had trouble at times stopping the run, but they’ve offset that at times by putting up points and forcing opponents to play from behind, which Trey Flowers admitted on WEEI Monday that they were able to do Saturday night against Tennessee. They’ll need a similar performance again this weekend.

4) Tom Coughlin is part of this equation – We won’t get into the fact Coughlin was the man behind Tom Brady’s two Super Bowl losses, but he’s now part of football operations in Jacksonville and will likely at least be a small part of whatever game plan Jacksonville puts together this weekend. The one thing he brings to those players is a reminder that even though many throughout the country won’t give them much of a chance of winning this weekend, he’s just the person to remind them that it can be done. Like the Giants teams he coached, Jacksonville brings a tough and disruptive pass rush and they’ve played well and they’re not the same team that used to beat themselves under new head coach Doug Marrone. As a result, it’s not tough to see the similarities, and just knowing Coughlin will be in the building in a championship game should be enough to have any Patriots fan feeling just a little uneasy.

5) Despite the criticism, Bortles showed Sunday he can make big throws if the opportunity presents itself – While he didn’t do much against the Bills during the Wild Card Round, the Jaguars’ coaching staff took the handcuffs off Bortles Sunday and allowed him to take some shots down the field that paid off. Some of the early discussions have focused on the fact that while the Jaguars have a good defense, they won’t be able to score. However, they just went out and went toe-to-toe with a Steelers team that had a pretty good defense and yet the Jaguars still managed to put up over 30 points offensively against a Pittsburgh team that took the Patriots down to the wire during the regular season.

New England is no stranger to periodically giving up a couple of big plays here and there and as long as the Jaguars don’t come into Foxboro playing scared, they’ll probably hit a few. Against the Steelers, those plays lead to touchdowns after Jacksonville capitalized on all five of their red zone opportunities. Bortles isn’t as bad as some have made him out to be and he’s remained relatively careful with the football, which is a big improvement to who he was last season. If he plays well again and doesn’t turn it over, this might be tougher than some might think.

6) The Jaguars Have Nothing to Lose – One of the most dangerous opponents one can face is a team that has nothing to lose. Having finished 3-13 the year before, Jacksonville has already far exceeded anyone’s expectations. In fact, they became just the second team since the 1990 merger to reach the Championship game after winning three or fewer games the year before.

While the Patriots will likely hear from Bill Belichick about the dangers this team presents, the Jaguars will likely spend this week listening to the media give them all the reasons why they have no chance heading into the Conference Championship.

The Jaguars already proved any team who takes them lightly may pay the price. While the Patriots likely won’t follow Pittsburgh’s lead, we may find that Sunday’s outcome likely won’t mirror what we saw Saturday night against Tennessee.