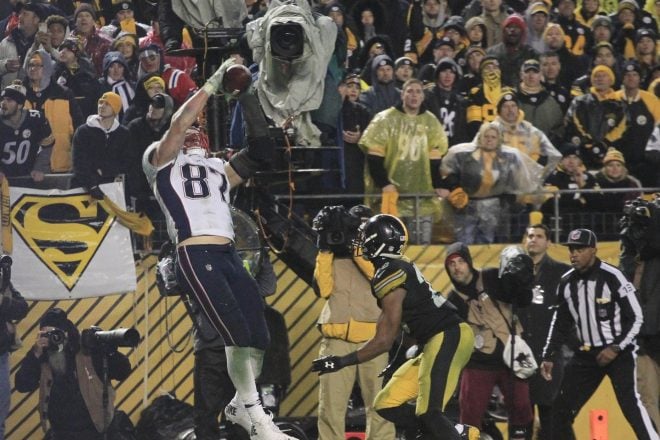 Sometimes it doesn’t matter how you start but how you finish. Although the Steelers controlled the vast majority of this game with their offense dominating in terms of time of possession, it never really carried over to the scoreboard. Even when the Patriots were down by 8 points in the second half, you never had the feeling that they were out of this game and they were still only down by a single score.

The one thing we know about this team is that they are a resilient bunch and that if you’re going to beat them, you need to play a full 60 minutes. Pittsburgh controlled the majority of the game, but the last few minutes belonged to Tom Brady and company. Followed by a wild and wacky finish where there was a long pass play, a disallowed touchdown and an interception to seal the deal, it was a satisfying win that not only clinched the AFC East but put the Patriots back in control of the AFC with two games to play. Perfect? Far from it. Satisfying? You bet and the coaches will take it.

So we’ll go thru the positions after rewatching the tape and see what the grades say this week.

Tom Brady had a very good game considering the circumstances. His wide receiver corps was thinned even further with no Chris Hogan and then lost Rex Burkhead and James White during the game but he persevered.

Pittsburgh played much more man coverage in this game when they tried to sprinkle in some zone, Brady immediately hit Cooks with a 43-yard pass down the left side. They got good pressure on him all game long which made him uncomfortable in the pocket.

That pressure forced him into a bad interception in the third quarter with Vince Williams being the first Steeler to pick him in a dozen years. He nearly had another in the final two minutes on a tipped pass at the line.

But after that he was brilliant. Brady was 5-7 on throws of more than 20 yards in the air. So much for the dink-dunk myth or that his arm strength is failing. He realized that Pittsburgh still has no answer for Rob Gronkowski and they did what they always do to the Steeler secondary, they eviscerated it in the second half. On the key 4th and 1 play, Brady recognized the defense and signaled Gronkowski, who was one-on-one with Sean Davis. The result was an easy 10 yard gain, which led to a touchdown to Cooks.

The Patriots didn’t run the ball very much in this one as they were mostly playing from behind this week. But when they did there was some hit and miss. Dion Lewis had 12 carries for 67 yards including the game-winning run from eight yards out that totally caught the Steelers off-guard after Gronk tortured them down the field. But he didn’t  seem to get enough work between the tackles.

Rex Burkhead went down with what looked like a serious knee injury but luckily that wasn’t the case. He had a nice touchdown run inside. James White went down during the game but was able to return.

What was surprising was how little production the backs had in the passing game. Lewis had one catch for 13 yards, White had two catches for eight although Brady overthrew him when he had a lot of open space and Burkhead had one catch for five. James Develin had an uncharacteristic drop but was mostly good in the running game opening up holes for the backs when they did run

The wide receivers weren’t a big factor in the game, part of that is on them, partly on the Pittsburgh secondary. Brandin Cooks had a 43-yard reception early and a nice touchdown in the back of the end zone but he ran a deep, double move pattern too close to the sideline. That allowed the defender to ride him out of bounds. That wiped out a huge gain on what was Brady’s best throw of the game.

Chris Hogan was out, Kenny Britt made an early contribution after just a few days on the team. He’ll be looked at more as the schedule plays out. Danny Amendola had just two catches on the day and Phillip Dorsett had just one. Not enough production

Rob Gronkowski came back from his one-week suspension and played like a man possessed, especially in the second half. Gronkowski finished with 9 catches for 168 yards, where 135 of them were after halftime. He was simply dominating the game.

Pittsburgh had no answer for him and they were simply outmatched by his strength and speed. It is one thing saying that you’re going to be physical with him, it is another thing entirely going out and doing it.

He owned the field on the final Patriots touchdown drive gaining 26 yards on back to back plays taking the Patriots from deep in their own end to the Steelers 25 yard line. Then showing incredible flexibility, (TB 12 Clinc?) he reached down to pluck a low Brady pass off the turf and rumbled for 17 more setting up Dion Lewis’ touchdown run. On that play, both he and Dwayne Allen put punishing blocks on the Steelers defensive line.

And he’ll still hear it in the film room, he dropped a touchdown that he’d normally make the catch on. But his overall play more than made up for that. As games go this was a dominating performance as you’ll see.

The offensive line had a mixed game, they were allowing too much pressure, once again Joe Thuney struggled, as did Shaq Mason in pass protection and they didn’t get the consistent push in the running game but it was good enough. As is the norm with them, when the chips were on the line, they held up really well. Nate Solder had one of his best games of the year. Did anyone hear T.J. Watt’s name once in the game? He’s been a disruptor for the Pittsburgh defense and Solder kept him far away from Brady all day. Nice bounce back type of game for Dante Scarnecchia’s crew after the Miami mess of a week ago.

Trey Flowers was back and he made his presence felt getting some pressure in the passing game. But overall the pass rush is still an issue and it is a case of them “almost getting there” it seems. No Alan Branch this week and the Steelers ran at the interior early but the middle of the line, Lawrence Guy, Malcom Brown and Ricky Jean-Francois did a pretty good job of gumming up the middle. Where the Steelers ran very effectively was on the edge. Both Deatrich Wise and Eric Lee were consistently washed out or pushed inside and Le’Veon Bell was eating them up on the outside.

Lee missed a sack that he should have had against Roethlisberger, he’s not as mobile as he used to be and Lee should have made that. The team dropped Flowers into the flat on a few passing plays and he was abused by Bell.

This is an area to watch moving forward and a possible Achilles Heel in January, especially with no Kyle Van Noy. Elandon Roberts, David Harris, and Marquis Flowers had games that won’t be pretty in the film room this week.

They were consistently blown up in the running game by the Steelers offensive line who once they got to the second level owned them. Roberts flew up into the wrong gap and had a handful of air on Bell’s touchdown run and looked lost there. Harris, whose specialty is the run game, was blown up quite a few times, too many.

Coverage isn’t their strong suit which is why the Steelers were successful on those shallow crosses. Matt Patricia tried blitzing them and they had an o-fer. Every time they blitzed Roethlisberger made them pay going a perfect 6-6 for 80 yards and a score.Ugly day again for the linebackers.

The secondary had its problems with the Pittsburgh speedy group of wide receivers. Overall the Steelers were 10-16 on third down which is very good, but the team stopped them on their final three attempts. When they’re having that kind of success, the secondary has to bear a lot of the burden but it goes hand-in-hand with the pass rush as well. Rewatching the film, Roethlisberger had so much time, the receivers had time to shake themselves open.

Stephon Gilmore had a rough day with Martavis Bryant who was giving him trouble with his combination of size and speed. Malcolm Butler didn’t have to cover Antonio Brown for long as he was injured, but made a great play tackling Heyward-Bey inbounds on the Steelers final drive keeping the clock moving… under the radar great play.

Eric Rowe made the tip on the final interception that Duron Harmon picked off. Don’t pay attention to that knucklehead on the radio. Harmon is a money player who is always around the ball. Devin McCourty and Pat Chung were solid as always. Jordan Richards? What in the wide world of sports was that attempt on the JuJu Schuster-Smith catch and run? That was singularly awful and nearly cost them the game. That’s a tackle he has to make and to whiff like that? Inexcusable.

The secondary as a whole deserves high marks for not falling for the fake spike. Roethlisberger threw that into triple coverage, something that been lost in the shuffle among the hysterical fan/media outrage over the James drop in the end zone.

Stephen Gostkowski missed an extra point but that was because of a rare snap miscue by Joe Cardona. Ryan Allen had to adjust and didn’t have a good hold, it forced Gostkowski’s timing off and he shanked it.
Allen had a net 47 yards on his punts and Gostkowski’s kickoffs consistently put the Steelers deep, behind the 20-25 yard line. Other than the one miscue, they were fine, but it could have been costly. Matthew Slater had a great play on a sliding downing of an Allen punt pinning the Steelers deep.

Bill Belichick always preaches situational football, that’s why the Patriots pull out so many of these close games and opponents fail. No one bit on the fake spike, and the Steelers were unprepared for the final few plays after the James score was overturned. That is something the Patriots never have to worry about. Josh McDaniels’ crew couldn’t convert third downs again in the first half, but once he locked in on the Brady-Gronk connection, he rode it. Matt Patricia’s beat up crew on defense couldn’t get off the field on third down. It wasn’t for lack of trying, but they got the final three third downs including the final pick.