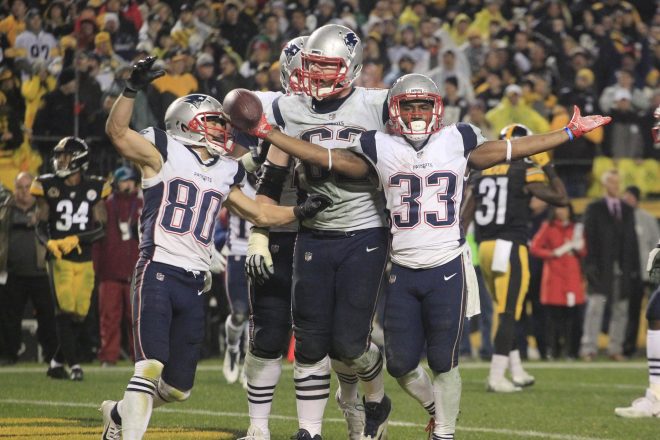 PITTSBURGH – In this 17th year of Patriot dynastic rule, at times along the way, things happen that seem to only happen to them.

Now you have two teams seemingly exchanging conceded touchdowns in the final minute, one of them gets overturned on review, then a fake spike and an end zone interception. Duron Harmon, the man who fired up his team at halftime of last year’s Super Bowl and predicted the comeback, came up with the end zone pick to seal an unbelievable 27-24 win over the Pittsburgh Steelers at rainy Heinz Field on Sunday. The home fans booed their team loudly as the Patriots once again walked off with victory ringing in their ears in the Steeler crib.

The last two minutes of the game were just incredible. The Patriots were staring at a 24-19 deficit, with a Stephen Gostkowski missed extra point mixed in. Tom Brady took over at the New England 23 with 2:06 left. On second down, Brady finds his old reliable, Rob Gronkowski, absent last week at Miami thanks to his one-game suspension, for 69 yards over the next three plays. The third catch was a miracle shoestring catch in the right flat which put the Patriots at the Steeler 8 with exactly one minute to go.

The next play is intriguing. On first and goal, Dion Lewis took a handoff and scored to put the Patriots up, 25-24. His run off left tackle was poorly defended, raising the possibility of the touchdown being conceded to give Ben Roethlisberger and his offense time to win the game with a field goal. Brady found Gronkowski on a lob pass to the right side for the two-point conversion, and it was 27-24 Patriots with 56 seconds left.

But that was plenty of time for Roethlisberger, with one timeout left. Taking over at his own 21, Roethlisberger hit rookie wideout Juju Smith-Schuster in the left flat, a seemingly benign play to begin the drive. Except Smith-Schuster found a lane along the left sideline, Devin McCourty and Jordan Richards missed tackles, Eric Rowe had a bad angle, and Smith-Schuster was off to the races.

Here is the first “mythical” moment in the end of this game. Seemingly headed for the end zone, Smith-Schuster slowed up and was tackled at the Patriot 10. The play covered 69 yards, but if the Steelers had scored on the play, Brady would have had time to respond. So the Steelers took over and tried to run clock.

On first and goal, Roethlisberger lobbed a pass over the middle to a curiously wide open Jesse James at the goal line. He fell into the end zone and the officials signaled touchdown. The play went to review, and it looked on replay like the ball was at the one when his knee hit. So the touchdown was coming off the board.

Except the replay officials weren’t looking at James’ knee. They were looking at his hands, and whether he juggled the ball when he fell to the ground. Referee Tony Corrente took a long look at it, then announced that James “did not survive the catch”. It was an incomplete pass, second down and goal at the ten. The Patriots had seemingly conceded that touchdown to get Brady time to respond, but fates had different plans for the Patriots.

On second down, Roethlisberger hit Darius Heyward-Bey, in for the injured Antonio Brown, in the left flat for seven yards. Butler tackled him in bounds. The clock was running, down to near ten seconds left.

Roethlisberger lined up for a presumed spike to kill the clock and set up a chip shot field goal attempt to send the game to overtime. But Big Ben faked the spike, and instead tried to hit Eli Rogers in the end zone on a right slant pattern. Rowe arrived there in time to bat the ball in the air. Harmon came down with the pick, Brady took a knee, and the astonished Steeler crowd booed in disgust.

The two teams were giving up touchdowns to make sure they got the ball last. But in the end, it was a foolhardy decision by either Roethlisberger or offensive coordinator Todd Haley to fake the spike and go for the touchdown. Take the sure field goal and try to win it in overtime. Instead, the Patriots now look like a lock for the top playoff seed once again when the game suggested that the Steelers would do it.

The game prior to this had been an exercise for the Patriot defense dealing with a very deep Steeler offense minus Brown, a Steeler defense which finally played man coverage and did much better in dealing with the Patriots up until the end, and the Patriots making key mistakes which under normal conditions would have spelled defeat. Brady threw a third quarter interception, Gostkowski missed an extra point (which was snapper Joe Cardona’s fault, not the kicker), the Steelers were 10 for 16 on third down conversions, and the Patriots could not completely deal with the loss of Brown thanks partly to Martavis Bryant, who burned Stephon Gilmore for a one-handed touchdown catch at the end of the first half.

Brown left the game with a calf injury in the second quarter. Trying to make a sliding touchdown catch, he collided with Harmon and Rowe in the end zone. Rowe stepped on his calf, and Brown wound up going to the hospital. However, Le’Veon Bell was a one-man wrecking crew with 165 all-purpose yards, 117 of those yards on the ground. Smith-Schuster had 6 catches for 114 yards, Bryant had 4 catches for 59 yards.

Roethlisberger finished with 22 of 30 passing for 281 yards, two touchdowns, the late interception and a 110.6 rating.

Brady was 22 of 35 passing for 298 yards, one touchdown, one pick, and a rating of 87.6. Gronkowski had 168 yards on nine catches. Brandin Cooks had the one touchdown pass, with four catches total for 60 yards.

With the win, the Patriots clinch the AFC East, but nothing else. More importantly, the Patriots now have the inside track to home field throughout the playoffs. They have home dates left against Buffalo and the Jets, and the Patriots should be prohibitive favorites in both games. If they win both, they clinch the top playoff seed. The Patriots own road wins over both teams previously this season.

The win either speaks tremendously for the Patriots or poorly for the Steelers. While these sort of victories have come here and there for the Patriots, how much criticism Mike Tomlin or his coordinators will get will be interesting. Defensive coordinator Keith Butler will be brought to bear on why Gronkowski was single covered late in the game. Haley will have to answer for the late interception. Tomlin will probably have to answer for both.

Meanwhile, the Patriots still have a flawed defense which will get tested often in the playoffs, and an offense which is still capable of bailing it out. It worked once again on Sunday in Pittsburgh, but the Patriots know wins like this won’t always happen. Like the Super Bowl, the Patriots often times sit back and wait for the other team to mess up.

On the other hand, maybe the other team messing up will keep happening, and the Patriots will celebrate once again in early February.

READ NEXT:
Good News For Patriots On Burkhead’s Injury
Posted Under: Patriots Commentary

By: Mark Morse
Both games are in the books and we have learned about several players we have not seen play.  The practices leading up to the games…
51 seconds ago