5 years ago at 10:36 am ET
Follow @SteveB7SFG
Posted Under: Patriots Commentary 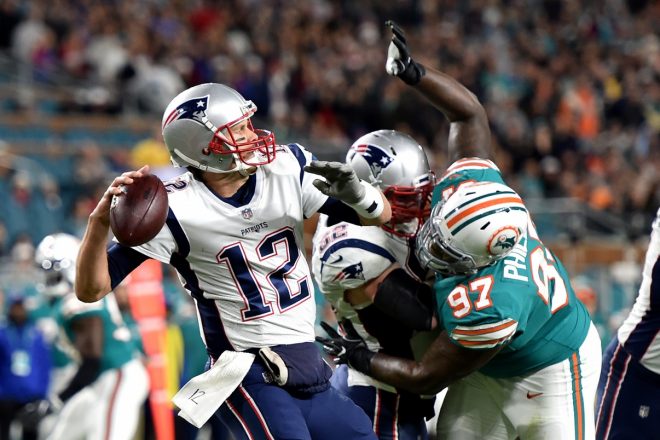 First things first, and we’ve said this many times in the past, however this time the script was flipped. The score is far from indicative of how the game played out on the field. Miami dominated this one from start to finish in all three phases of the game. That the Patriots were still within striking distance late in the game to attempt an onside kick was a testament to their resiliency because they really had no business winning this game.

It was a very disappointing effort on all accounts as they had an opportunity to wrap up the division with a win and played their worst game in the past two months.

So we’ll go thru the positions after rewatching the tape and see what the grades say this week.

Tom Brady had what he characterized as his worst game of the season, which is pretty accurate. The Dolphins switched up their defense, took away the middle of the field,  and were getting constant pressure on him while their corners completely shut down the Patriots wide receivers on the perimeter. Brady was forced into forcing low percentage passes down the field. He was picked off twice and nearly had a third.

He was forced to throw to the backs time and again because he had nowhere else to go.It was a very frustrating night for the team and its quarterback. It didn’t help matters that the offensive line wasn’t having a good night either. The Patriots were 0-11 on third down and Brady’s ability to slide and move in the pocket was the only reason the Dolphins didn’t have half a dozen sacks.

The Patriots didn’t run the ball effectively enough and then abandoned the idea way too soon in the second half. Dion Lewis and Rex Burkhead had just 10 carries between them, James White had one. When the offense, which has been so balanced falls into that kind of ratio, bad things can happen and on a night where their top two receivers (Julian Edelman and Rob Gronkowski) weren’t in the lineup…bad things abounded.

Lewis had a fantastic one-handed stab of a pass Brady floated out when the Dolphins blitzed and Lewis, running a wheel route turned it into a 20-yard gain.

Burkhead turned one screen into a 23-yard play and had a nice run behind a block from James Develin into the first touchdown of the game.

James White made a really nice catch on a low throw from Brady and was able to keep his balance and dove for the pylon for a touchdown.

The wide receivers probably didn’t get the memo that the game started at 8:30 because they didn’t show up and then barely at that until the second half. Xavien Howard completely shut down Brandin Cooks, he wasn’t able to do anything on the Dolphins corner who picked off two passes. He had no catches until late in the game when he snagged a 38-yard pass when Miami had gone to a zone and blew the coverage and left him all alone. Chris Hogan caught one pass for one yard on five targets, being much less a factor in his return than was thought.

Danny Amendola had six catches including a nice 23-yard grab where he just came up short of falling into the end zone with just under two minutes to go in the game. Had the onside kick worked, it would have been a much bigger play.

No Rob Gronkowski this week equated to zero production from the tight end position. With Gronk out, the Dolphins left a safety in the middle and Dwayne Allen and Jacob Hollister were not able to make any production at all where it was needed most.

Allen was targeted five times although not all of Brady’s throws were on the mark. He ended up with two catches for 10 yards. Not nearly enough.

The offensive line had a night that they’d rather forget although, with Dante Scarnecchia as their coach, they’ll hear about it this week. The running game rushed for 25 yards, Brady has hit hard all night and the Dolphins blitzes weren’t being picked up nearly as sharply as they should have. The fact that Brady was sacked only twice speaks much more about his ability to move and slide in the pocket and unload the ball than it did about their ability to protect him.

The bad night was shared equally. All of the members were getting beat at different times on Monday night. Ndamukong Suh had a very strong game, he overmatched them inside all night long.

The defensive line was thin, missing Trey Flowers and Kyle Van Noy who plays both on the edge and as a linebacker. Then Alan Branch went down with a knee injury, tried to come back and left for good. That left Deatrich Wise, Adam Butler, Lawrence Guy and Eric Lee playing a lot of snaps with little rest. That is an awful lot of inexperience there. Only Guy has played in the league longer than this season. And he had a terrific game and really stepped up his play. He had two run stuffs and nearly had a pick-six when Jay Cutler literally threw the ball right to him on a botched screen.

Butler had a few flashes, especially late in the game when the defense stiffened in the fourth quarter, but the run defense was gashed by Kenyan Drake and their inability to set the edge hurt. Lee was caught a few time not doing that, and for a guy with three games of experience in the NFL, that is what happens when the next man up mantra gets overused. No pass rush to speak of, Cutler was way too comfortable for most of the night. This unit needs to get healthy quickly this week.

Elandon Roberts had arguably his best game as a Patriot two weeks ago against Miami but the script was flipped on him this time around and he had one of his worst. Due to injuries and David Harris being a healthy scratch, it was just Roberts and Marquis Flowers for the majority of the night. The run support wasn’t great, (Roberts’ specialty). Matt Patricia called a run blitz and instead of stuffing it behind the line, Roberts whiffed (a common occurrence all night) and Drake ran for 26 yards. Miami isolated him with Drake split wide and the results were what one would expect. That isn’t Roberts fault, the Patriots often do the exact same thing. It is up to the coaches to get him some help. Letting the speedy Drake run a 47-yard fly on Roberts is a win for Miami. Marquis Flowers had a forgettable night but did have one nice stop on Drake for a loss. Trevor Reilly made a cameo.

The secondary had its weakest game in the last two months. Malcolm Butler had a very rough night. He was burned by 5’6 wide receiver Jakeem Grant for a 25-yard touchdown and should have given up another. Grant flew by him and was wide open. Cutler put the ball perfectly in his hands and Grant dropped it.

Stephon Gilmore and Jonathan Jones were simply okay and not playing anywhere near the level they had been in the past month plus. The players looked like the dreaded communication issues were resurfacing with all of the crosses and bunch formations Miami was running. Pat Chung got faked out completely on a beauty of a spin move by Drake…that is one you just tip your hat to the foe.

Devin McCourty was solid and came unblocked on a blitz where he made a big sack of Cutler keeping the Patriots close. Jordan Richards came on another similar play and whiffed completely, resulting in a first down and later a Miami touchdown.

The star here was Ryan Allen, who had his best game in quite awhile. He had a strong 46.4 net punting average with incredible hang time which really limited Miami’s ability to return the ball. He dropped several inside the 20. That fact alone kept the Patriots hanging around late in the game. Stephen Gostkowski hit both field goals and his kickoffs once again were outstanding, Miami’s kick return game was stifled by excellent coverage. The Patriots return game was stuffed completely as Miami’s coverage units were likewise outstanding.

What in the world was up with that onside kick? That had to be one of the uglier attempts I’ve seen, rivaling the Colts fake punt. Ugly design, uglier execution.

Bill Belichick was outcoached by Adam Gase, something that doesn’t happen all too often. The team came out flat and seemed unprepared. They usually have one of these type of games every year but this was the worst of all possible times to have that happen.

Josh McDaniels had some curious play calls and abandoned the run far too soon which seemed a bit of a panic move especially with the team down only three at the half. Matt Patricia’s MASH unit on defense was gashed both on the ground and in the air. But he did what he had to do, got creative with some blitzes and the defense made five straight stops late in the game to give them a chance to come back.

By: Steve Balestrieri
But we need to continue to work to do things better on our end. Then as it relates to our specific opponent. There's no magic…
5 mins ago