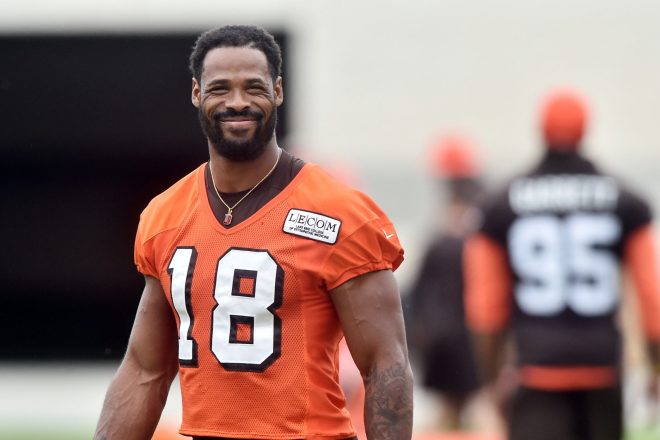 Watching the Patriots group of receivers struggle Monday night without Rob Gronkowski apparently sparked the team to make a change on Monday.

According to the NFL Network’s Ian Rapoport, the Patriots are signing WR Kenny Britt to a 2-year deal, adding the former Rutgers receiver after he cleared waivers following the Browns waiving him last Friday.

It’s a solid move for New England, with the 6’3″ Britt bolstering a group who last night couldn’t get much going with their fellow tight end sidelined.  It was a rough night as Chris Hogan, Brandin Cooks and Danny Amendola each failed to make much of an impact against a physical Dolphins defense that held the offense to a frustrating 0-for-11 on third down.  Given the injuries they’ve dealt with, Britt will also give them better depth ahead of Phillip Dorsett, who hasn’t been able to establish a consistent role for himself this season.

Britt originally signed with Cleveland this past offseason, reportedly signing a $32.5 million deal that included $10.5 million in guaranteed money.  According to Rapoport, the Patriots were in the mix but opted out after his price tag got too large.

Britt caught 18 passes for 233 yards and two touchdowns in Cleveland, but he’s also had some moments that included dropped passes and inconsistent play.  We’ll see if he and Brady can get on the same page and if he can contribute, which if he does, will hopefully give them an additional boost heading into the postseason.