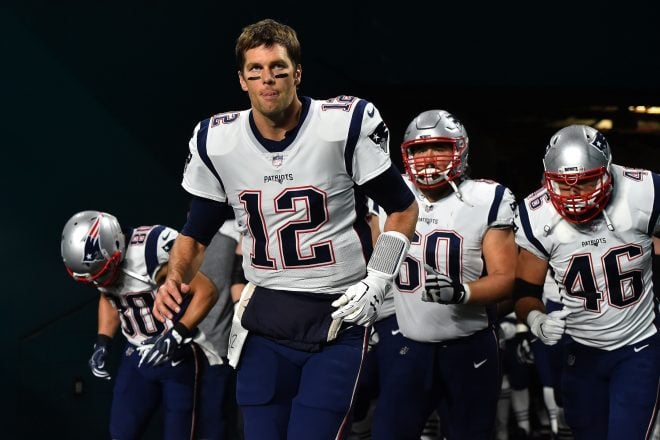 MIAMI GARDENS, Fla. – In his postgame press conference, the first question posed to Bill Belichick was whether he thought his players were looking ahead to Pittsburgh.

Belichick looked strained, paused for about 20 seconds, then seemed to force himself to say “No.” It looked like he was dying to say “yes” but simply couldn’t.

Playing the Miami Dolphins for the second time in three weeks, the Patriots found themselves in a tough battle in south Florida once again with the underdog Dolphins. Too many Dolphin players who can be classified as “good but not great” players rose up and played way above their heads, and the ones who truly are great went after the Patriots hard all game long. Miami postponed an AFC East division clinching party for the Patriots by winning, 27-20 on Monday night at Hard Rock Stadium.

The Patriots fell to 10-3 on the season going into the postseason defining tilt next week at Pittsburgh, which explains why the Patriots might have been looking past Miami. Ironically, if the Patriots beat Pittsburgh next week, they will move back into a tie with the Steelers for the conference lead, but they will own the tiebreaker and control their destiny for the top playoff seed in the conference. All that aside, the Patriots looked flat as a pancake at the worst possible time, while the Steelers have been an offensive machine as they prepare for a team that has had their number over the last several years, including two losses last year.

But this is a Miami team that is far inferior to the Patriots on paper. The Patriots simply got caught looking ahead to Pittsburgh, whether they will admit to it or not. Combine that with having to play in a venue where the Dolphins can sometimes dial it up and play over their heads, and you have the quintessential trap game. And the Patriots did indeed fall into a trap, thanks to bad execution, lack of energy, and facing a team that unbelievably wanted the game more.

For once, weather down here wasn’t a factor. Normally a warm and humid place even in December, the temperature at kickoff was a very pleasant 55 degrees. The Patriots could not blame humidity for the loss. Sometimes the Patriots come here in September and suffer huge defeats. They lost here in December two years ago, but that was due to bad coaching and arrogance towards the eventual Super Bowl champion Denver Broncos.

This loss is primarily borne out of a lack of focus and will to win, looking ahead to the big game next weekend. Players like Jay Cutler, Kenyan Drake, Xavien Howard, Jordan Phillips, T.J. McDonald, they aren’t the kind of players who can lay a stick on the Patriots if the Patriots bring their “A” game. But the Patriots made Cutler, a pathological underachiever who began the year retired, look like Bob Griese. Howard picked off Tom Brady twice and completely shut down Brandin Cooks. Drake had 193 all-purpose yards, 114 of those yards on the ground. Phillips and McDonald were flying all over the place. The marquee guys, Ndamokung Suh and Cameron Wake, looked like bit players thanks to everyone else out there who made Brady look like a real 40-year-old.

On the third play of the game, Brady tried to hit Cooks on a deep left sideline pattern on third and ten. Brady threw a nice tight spiral that was underthrown by about 3-4 yards, and Howard was able to maneuver in front of Cooks and make the interception. Brady spent the rest of the game struggling to cope with the inspired Miami defense. The Patriots did briefly lead in the second quarter, 7-6, but it didn’t last long.

On the third play of the second half, Brady again faced third and long. From his own 12-yard-line, he dropped back and launched a deep ball over the middle towards Cooks. Howard closed quickly on Cooks and took the ball away from him. This ball was also underthrown, albeit not as much as the first interception.

Brady was under siege all game long. He was sacked twice but was hurried many times by a heavy blitzing Dolphin defense. He finished 24 of 43 passing for 233 yards, one touchdown, and a passer rating of 59.5. Except for a little stretch in the second half where Brady found a brief rhythm, Brady never really was able to do what he does. In the fourth quarter, the Patriots suffered three drives that went three and out, and had seven such drives for the entire game.

Cutler retired after last year after a mediocre and unfulfilling career with Denver and Chicago. In the meeting two weeks ago, Matt Moore was the starting quarterback. Patriot Nation seemed to wish they were facing Cutler instead. Cutler finished Monday’s game with 25 of 38 passing for 263 yards, three touchdowns, and a 112.1 rating. It was Cutler’s first win ever against the Patriots after losing his first four games, one with Denver and three with Chicago. Cutler simply isn’t this good, but the Patriots made him look good.

The lack of a pass rush helped, but Cutler was able to find Drake, Jarvis Landry and DeVante Parker with regularity. Drake in particular had success in screens, but most of his 79 receiving yards came on a 49-yard right sideline bomb in the second quarter. He lined up on the right side as a wideout, with Elandon Roberts in single coverage. Drake ran right by him on a go route and hauled in the long pass. That play set up a touchdown pass from Cutler to Landry from five yards out to give the Dolphins the lead for good at 13-7.

A short week for the Patriots awaits, followed by the “game of the year” at Heinz Field next week. Gronkowski will be back, Belichick can outcoach Mike Tomlin, and the Steelers won’t have their top defensive stud, Ryan Shazier. But if the Killer Bees watch film from this game and see how they can bludgeon the Patriot defense, the result may be a basketball score, with the winner being whomever gets the ball last.

Maybe this loss will be a blessing in disguise. Next weekend, the team that wants to win more has to be the Patriots, period.