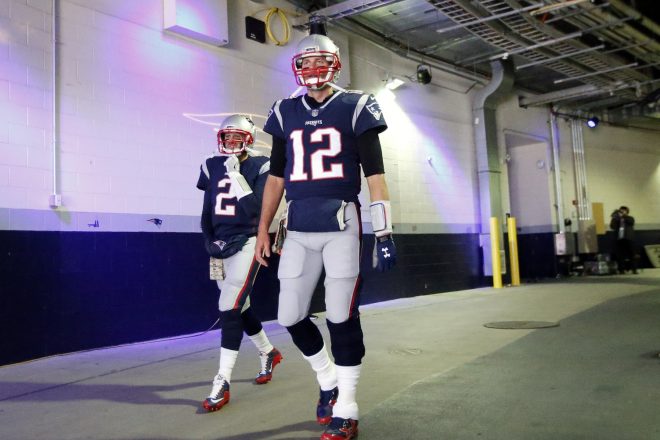 When you’re 40-years old and you’ve already had an incredible career, the only thing left is to continue stacking up the records in the record book.

Tom Brady did just that on Sunday, accomplishing a few different milestones. By throwing four touchdowns, Brady moved into 3rd place all time with his 28th career game of 4 or more TD passes. His 27th came earlier this season when he threw five touchdowns against the Texans back in Week 3.

Brady’s final touchdown was also his 26th of the season, which is now the most all-time in a season among quarterbacks after turning 40. Both Warren Moon and Brett Favre each had 25.

Most Pass TD in Single Season
After Turning 40 Years Old

His second touchdown pass to Rob Gronkowski in the 3rd quarter was also his 481st career touchdown, which at the time moved him ahead of Drew Brees into 3rd place for most all time.

Speaking of Gronkowski, Brady and Gronkowski also set a record, with the veteran tight end catching two touchdown passes, giving the pair 74 over their career and moving them ahead of Drew Brees and Marquis’ Colston for 5th all time.

Despite the numbers, the most important thing to Brady was the fact that his team won their 9th game of the season.

“They’ve got an agressive defense, but We made enough plays,” said Brady of Miami after the game. “It was good to win a Division game at home. So [we’re] 9-2, just keep grinding. Isn’t it fun?”