5 years ago at 11:34 am ET
Follow @IanLogue
Posted Under: Patriots Injuries 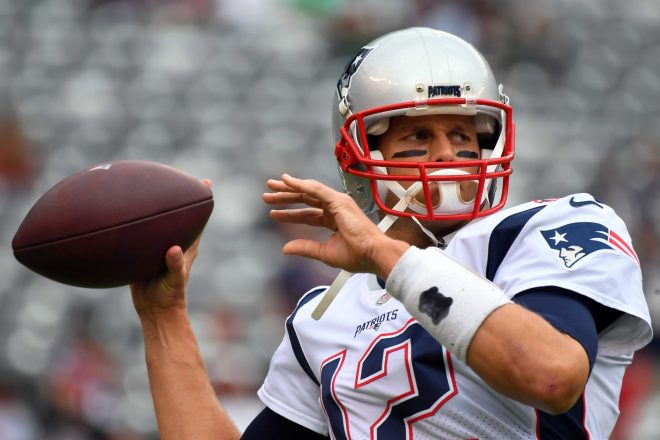 Anytime Patriots quarterback Tom Brady misses practice there’s always a little bit of a reason to be concerned given that the veteran never likes to miss time, but it sounds like Wednesday’s absence may not be a reason for concern.

Brady reportedly sat out Wednesday’s session with an Achilles injury, which on the surface seems like a red flag given that it’s spelled the end of the season for quite a few players. According to the NFL Network’s Ian Rappoport, the injury is minor and there doesn’t appear to be any real concern surrounding it.

#Patriots QB Tom Brady did not practice with an Achilles injury that I’m told is fine. Rob Gronkowski has an illness.

For fans here in New England, there’s obviously reason to be be a little worried. After trading Jimmy Garoppolo to San Francisco prior to he trade deadline, should anything happen to Brady, the team now has just Brian Hoyer behind him. That’s certainly not ideal and of all the injuries that could bite the 40-year old quarterback, the Achilles would probably be the more likely of them.

One of the more recent Achilles injuries happened to Seahawks defensive back Richard Sherman, who reportedly experienced soreness in his before it eventually ruptured against the Cardinals two weeks ago. Obviously playing defensive back is a little different from playing quarterback, with cornerbacks forced to explode off their feet and change direction. Quarterbacks don’t quite have that same stress on theirs, but depending on which foot Brady injured, most of the power in their throws comes off of their plant foot and it will be interesting to see if this affects him.

In trying to find a parallel where a quarterback suffered an Achilles injury and recovered, a quick look showed an example from back in 2009 with Pittsburgh’s Ben Roethlisberger. Leading up to a preseason game against Washington, Roethlisberger had his left tackle step on his foot during a Thursday practice, leading to an Achilles injury.

He was carted off the field and one reporter caught him saying, “Oh it just feels great. It feels like a car ran over it.”

Roethlisberger missed the ensuing preseason contest, but went on to play in every game in 2009. One slight difference between the Steelers quarterback and Brady, Roethlisberger was in his late 20s when he suffered that injury. Brady is obviously 40.

Either way, the injury to Roethlisberger is just one example of the fact what Brady might be dealing with isn’t necessarily a precursor to it potentially being something bigger. But it doesn’t change the fact that how far the Patriots go from here will obviously depend on Brady’s health. Hopefully, like the shot he took to his knee against Seattle last season, this will be just another bump during another championship run this season.

By: Robert Alvarez
Linebacker Jahlani Tavai agrees to a two-year contract extension with the Patriots.
15 hours ago

By: Robert Alvarez
Devin McCourty will appear in his 200th career NFL game on Thursday night against the Buffalo Bills, Robert Kraft honors his milestone.
17 hours ago

By: Robert Alvarez
Robert Kraft lends the Patriots team plane to the University of Virginia so its players can attend the funerals of fallen teammates.
17 hours ago

By: Robert Alvarez
Sideline mic'd up sights and sounds during the New England Patriots' Week 12, thanksgiving matchup with the Minnesota Vikings.
18 hours ago