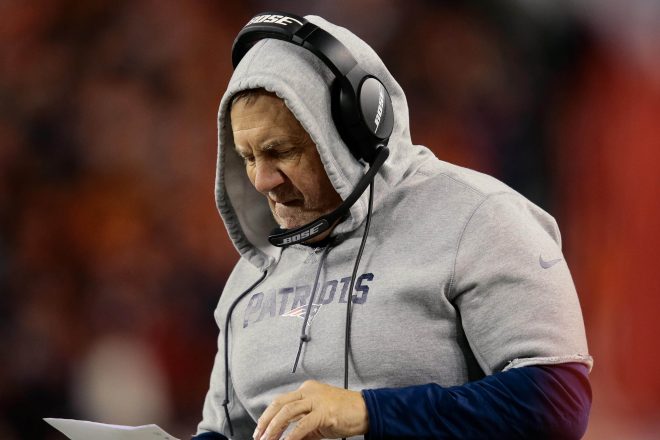 There are certain coaches players just seem to click with, and it appears that for Martellus Bennett, the one here in New England seems to understand him pretty well.

Bennett had a roller coaster of a week last week, with the Packers opting to part ways with him after learning about a torn rotator cuff tear in his shoulder.  After the tight end informing them he intended to have surgery, that would have meant Bennett was headed to injured reserve and the Packers claimed Bennett didn’t properly disclose the injury, leading to an ugly exchange between the two sides and the end of Bennett’s run in Green Bay.

After the Packers waived him, he told his agent to let other teams know not to claim him because he was opting for surgery.  However, to his surprise, one did, with Bill Belichick calling him to let him know the Patriots had claimed him.  Bennett said he was shocked when he heard the news.

“It’s not about, ‘Could you play?’ It’s, ‘Should you play?’ It was one of those things,” Bennett told the Boston Herald. “Right now, I’m just like, (expletive) it. At first, I told my agent to tell no teams to claim me because I was still trying to get the surgery. So when Bill (Belichick) called and said they claimed me, I was like, ‘No (expletive) way.’ ”

All of a sudden, everything changed.  Bennett told the Herald that he got a text from Tom Brady encouraging him to come back and suit back up for his old team and that appeared to be enough.  One plane right later, he was back in the same building where he won a championship a season earlier.  For most players, arriving on a Friday would have been far too soon to get acclimated to a new system.  For Bennett, despite being tired, Belichick had plenty of confidence in him and seemed to believe it wouldn’t be an issue.

We saw the results Sunday night.  Bennett went out against the Broncos and played well, appearing during New England’s second offensive series where he jump-started the offense with a 27-yard reception.  That catch got the Patriots past midfield and ultimately lead to a field goal, which put them up 17-6 at the time.  Overall, Bennett finished with 3 catches for 38 yards while playing just 7 snaps.

Not a bad start for a player who didn’t have much time to prepare.  But having played in this system all last season, he knew the terminology and obviously already had chemistry with Brady, not to mention the confidence from a coach who knew what he was capable of.

It was a crazy week, but after one game Bennett should be feeling pretty good about his decision.  With seven regular season games left to play and the future suddenly looking pretty bright for this football team, Bennett may now find himself in position to make another championship run and hopefully add another ring to take with him in the event he opts to retire after the season.