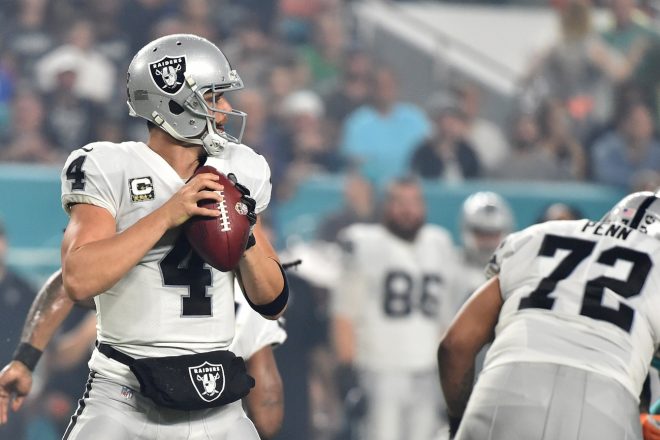 While the Patriots spent this week visiting Denver in a 41-16 win over the Broncos, their next opponent has had an extra week to get ready for Bill Belichick’s football team.

The Raiders were idle this week and likely spent quite a bit of time breaking down film against an opponent they could potentially face if they can somehow manage to turn their season around after a 4-5 start.  They’re already coming off of a hard-fought win over the Dolphins back on November 5th, which included a pretty good outing for Derek Carr.  Carr, who is continuing to get healthy following a back injury that knocked him out of action earlier in the season, missed just nine passes after completing 21-of-30 for 300 yards and a touchdown during the win.  He also got some help from Marshawn Lynch, who scored two touchdowns against the Dolphins while averaging 4.1 yards per carry against a solid Miami Defense.

But the Raiders are explosive, and the Patriots defense will certainly have their hands full.  Against the Dolphins, receiver Johnny Holton stole the show after catching a 44-yard touchdown pass from Carr, which was the longest pass play of the night for either team.

That’s not the first time Holton has done that.  He hauled in another 64-yard pass back on October 1st during a loss against the Broncos.  While those are his only catches of the season, both have obviously been big and he’s a player who appears to have big things ahead of him after joining the team last year as an undrafted free agent.

It’s a similar situation to Patriots receiver, Phillip Dorsett, who is also at the bottom of the team’s depth chart.  Dorsett has had some moments but has just six catches for 101 yards thus far after being acquired from the Colts in the trade of Jacoby Brissett.  He’s a player who with Chris Hogan sidelined got some additional playing time, finishing the night with two receptions for 16 yards in Sunday night’s win.

One advantage New England does have is the fact the team spent last week practicing at the Air Force Adademy to try and acclimate to the change in altitude, which will hopefully ready them for this Sunday’s trip to Mexico City.  That contest will see them play at an altitude of over 2000 feet higher, but it provides a slight advantage given that the Raiders don’t have any plans of going there early.

“You either have time to acclimate or it’s best to go in there as late as possible,” said head coach Jack Del Rio last week. “We’re not going to be there for two weeks, so our thought is to treat it a lot like we do the Denver game and go in the night before.”

For now it should be an interesting week.  With the Patriots coming off of a big win over the Broncos, they’re already forced to pack up and get ready for another tough opponent.  Beating the Raiders would certainly give them some much-needed additional momentum because after this week, the Patriots will embark on a battle within the Division over five of their final six games.

But make no mistake, the Raiders have a lot of their own riding in this game.  A win would give them some confidence and given how Kansas City is playing right now, it’s not out of the realm of possibility for Oakland to be in the mix in the AFC West down the stretch if the Chiefs continue to stumble.  As a result, this could be yet another game with postseason significance, which makes it yet another important game for a Patriots team that needs to continue to improve over the remainder of what has already been a challenging 2017 season.

READ NEXT:
Looking Back: Another Strange NFL Weekend
Posted Under: 2017 Patriots Season