5 years ago at 7:00 am ET
Follow @bob_george
Posted Under: Patriots Commentary 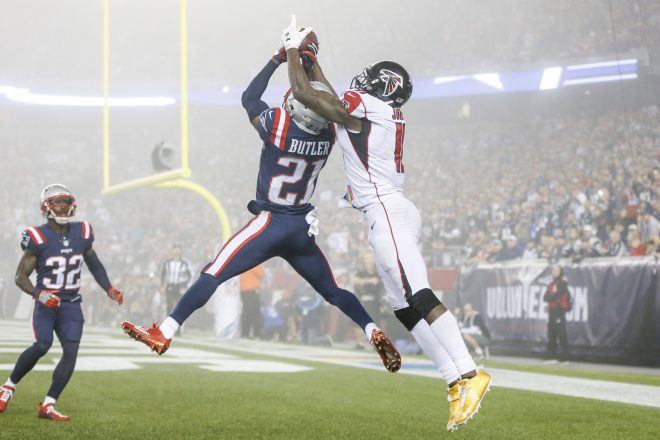 FOXBOROUGH – Honk if you were scared to death that the Patriots would lead the Atlanta Falcons, 28-3, and then cough it up.

Nope. These are the Patriots. They make 23-0 leads stand up.

The Super Bowl champions hosted the team they vanquished back in February, providing the nation with a delicious rematch to enjoy on Sunday night. There was nothing delicious about this game, except for those folks who love chowder, navy blue, and thick fog. The Patriots easily handled an obviously unsettled Falcon team, still not completely over their Super Bowl LI meltdown and in a fog as a team in general. It was a 23-7 final score, and the Gillette Stadium crowd, or rather those that could see the game through a thick fog which rolled in in the second quarter, enjoyed the game immensely.

The game wasn’t quite like the 1996 AFC Divisional playoff game against Pittsburgh, which the Patriots won 28-3 in far worse visibility. But the Patriots handled the Falcons with relative ease, excelling in all three phases of the game, and authoring their best effort, and game, of the 2017 season. Atlanta did a lot to shoot themselves in the foot, including questionable fourth down decisions, unbelievably bad place kicking by Matt Bryant, and a chronic inability to stop the running game.

The Patriots improved to 5-2, which is tied with Kansas City and Pittsburgh for the best record in the AFC, and lead Miami and Buffalo in the AFC East by a half game. If the Patriots have indeed solved their early season issues, this win will serve the Patriots well as they head into their long stretch of road/neutral site games. One major positive from this game is that they finally held the opposing quarterback to under 300 yards passing for the first time this year, as Matt Ryan had 233 yards passing for the game.

Two moments happened early on which more or less portended how the evening would go. On their second offensive possession of the game, the Falcons had the ball on the Patriot 48, facing fourth down and seven. Normally a punt situation, Dan Quinn gambled right off the bat and went for the first down. Ryan, formerly of Boston College, dropped back to pass, rolled right and scrambled nine yards for the first down. The play sent a message that the Falcons were psyched out and still not completely over the deflating Super Bowl loss. The drive ended when Cassius Marsh blocked a 37-yard field goal attempt by Bryant.

Early in the second quarter, at the Atlanta 31 and second down and six, Tom Brady rolled right and threw an ill-advised pass into the end zone. Robert Alford, who pick-sixed Brady in the Super Bowl, made the interception and returned the ball to the 13-yard line. But Adrian Clayborn was called for roughing Brady, and two plays later Brandin Cooks scored on an 11-yard jet sweep left to make it 7-0 Patriots. The exchange fired up the Patriots, and they took control of the game from that moment on.

The Falcons would go for it on fourth down two more times, and failed both times. Later in the second quarter, facing fourth down and six at the Patriot 47, Quinn again elected to go for it trailing 10-0 at the time. Ryan tried to hit Mohammed Sanu with a sideline pass to the left, but he overthrew Sanu with Jonathan Jones in coverage. The Patriots took over and cashed in with a Brady quick dump pass to James White for a score just before halftime to make it 17-0 Patriots at the intermission.

By now a thick fog had settled into Gillette Stadium. Fog had befallen the Falcons as well, as their first two second half offensive drives ended badly. They took the second half kickoff and marched to the Patriot 17 in nine plays. But Bryant missed a 36-yard field goal, yanking it off the left upright. The Patriots responded with a clock-killing 13-play drive which ended with a 21-yard field goal by Stephen Gostkowski. Atlanta got the ball back and drove to the Patriot 1 in 10 plays, carrying over into the fourth quarter.

It was fourth and goal at the 1. On third and goal, Ryan tried to hit Julio Jones on a crossing route in the end zone, but Malcolm Butler defended the play perfectly. On fourth down, the Falcons ran Taylor Gabriel on a jet sweep right, but Kyle Van Noy read the play perfectly and nailed the wideout for a five-yard loss. As in the Super Bowl, Quinn and new offensive coordinator Steve Sarkisian (Kyle Shanahan was at the offensive helm in the Super Bowl, he has since become head coach at San Francisco) eschewed the notion of running either Devonta Freeman or Tevin Coleman between the tackles. This was what everyone assumed Atlanta would do to try and make the Super Bowl a two-score game, and here it might have given them a better chance at a score.

The only thing that prevented a Patriot shutout was another amazing catch by Jones. Late in the fourth quarter, on first and goal at the one, Ryan tried to hit Jones with a lob pass in the right corner of the end zone. Butler was in perfect coverage, and leaped up to make what seemed to be an interception. Jones wrestled the ball away from Butler for the touchdown. Like Eric Rowe in the Super Bowl, Butler was in perfect coverage, but was outdone by an otherworldly wideout.

The Patriots did hold Ryan under 300 yards passing, but the Falcons were able to move the ball most all game long. Four times the Falcons made it to the Red Area, but failed three times and came away with just the late touchdown which was inconsequential. The Falcons gained 343 total yards as a team, and also benefitted from 65 penalty yards by the Patriots. The Patriots responded with long, time consuming drives, three of them ten or more plays, and three of them five minutes or more. This is how the Patriots used to deal with Peyton Manning, keeping him off the field as a central element of the team approach to victory.

Brady finished 21 of 29 passing for 249 yards, two touchdowns and a passer rating of 121.2. James White had five catches, including his first touchdown since the Super Bowl. Cooks and Chris Hogan each had four catches for 136 combined yards. The Patriots as a team averaged 4.5 yards per carry, with Dion Lewis gaining 76 yards on 13 carries. Mike Gillislee was again stuffed in short yardage, as he failed to score from the one in the third quarter. After Lewis gained eight yards on the previous two carries, Gillislee tried a right end run on third down but was dropped for a two-yard loss by Vic Beasley, and the Patriots had to take a chip shot field goal.

Ryan was 23 of 33 passing and a 99.7 rating. Jones had nine catches for 99 yards, while Freeman had 72 rushing yards on 12 carries. Ryan had three scrambles and averaged 12.3 yards per carry.

The Chargers, who now hang their hat at StubHub Center, a soccer field in Carson, California, come to town next week. They have played somewhat well since their San Diego exodus, even though they usually play at home in front of fans who are rooting for their opponent.

The Patriots have no such problem. They are still in the heads of the Atlanta Falcons, and life right now for them looks pretty good.

READ NEXT:
Patriots  Week 7 Report Card, Dominant for the First Time in 2017
Posted Under: Patriots Commentary