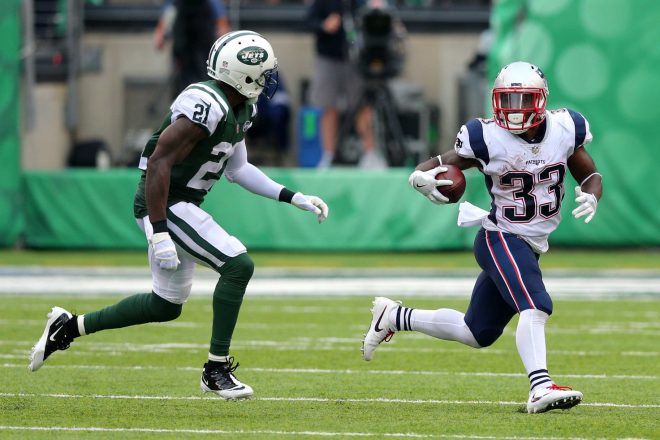 One of the biggest topics of discussions so far has been the amount of hits that quarterback Tom Brady has taken, but Dion Lewis received a little bit of praise on Monday for his part in keeping the veteran upright Sunday.

Lewis joined James White in playing 29 snaps Sunday, which included moments where he had to battle a relentless Jets’ pass rush that never managed to sack him. After the Jets went up 14-0, he was provided enough time to put together a 24-3 run that helped lift the Patriots to their fourth win of the season.

Offensive coordinator praised Lewis on Tuesday during his conference call, pointing out that his efforts certainly didn’t go unnoticed.

“Yeah, Dion did a good job the few times that they pressured the safety on Sunday. He took care of his responsibility and handled that well,” said McDaniels.  “You know, we ask all our backs to really do a good job in blitz pick up, whatever down that is, whatever the protection may be. It’s difficult to play in pro football if you can’t block blitzers as a running back. So, we ask all our guys to be prepared to do that. Some guys have to do it on different situational downs.”

McDaniels went on to say that each Patriots running back has had their role in their blitz packages, and he’s pleased with the progress they’ve made.  With the Falcons coming in, that will likely be another area to watch again this weekend.

“James White usually does it on third down or in two-minute situations for us and does a really good job of that,” said McDaniels. “You know, the guys that play on early downs, like Dion and Mike [Gillislee] and Rex [Burkhead] and Brandon [Bolden], those guys, there’s a different set of blitzers and packages sometimes that you’ve got to be ready for. But, I thought they did a good job of being ready and prepared for those things when they came up on Sunday. It certainly helped us in the game.”