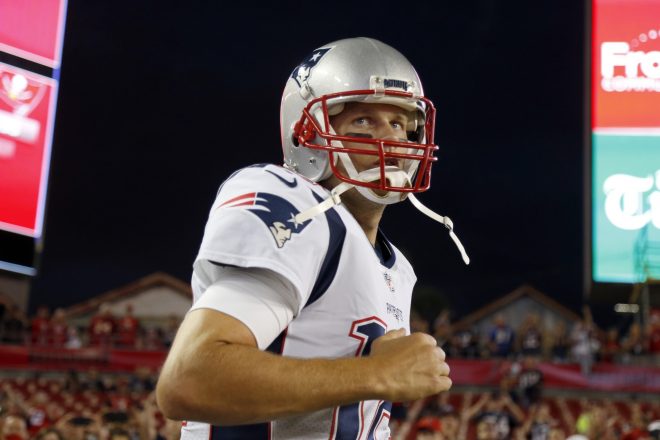 TAMPA – You get the feeling that if the score were 16-14 Patriots on the final drive, what was there to worry about?

Former Jet kicker Nick Folk suffered through a putrid performance, missing all three of his field goal attempts. The Tampa Bay Buccaneers were probably lucky that they needed a touchdown on the game’s final possession, trailing 19-14 thanks to a late 49-yard field goal by Stephen Gostkowski. The Bucs nearly got that touchdown, but they had a better chance to beat the Patriots by needing to eschew a field goal.

An incomplete pass in the end zone to O.J. Howard on the final play of the game sealed a 19-14 win for the Patriots on Thursday night. Making a rare visit to Tampa (their first visit there since 1997 when Tampa Stadium was named Houlihan’s Stadium) and their first regular season visit to Raymond James Stadium (though they have been here six times in the preseason), the Patriots made themselves and their fan base feel a little bit better after four weeks of lousy defense and 300-yard quarterback performances. The Patriots now have ten days to continue to work on patching the holes in their defense and improving their communication skills.

One other thing the Patriots will need to improve on, other than committing stupid penalties, is their offensive line pass blocking. Tom Brady was sacked x times in the game and suffered a strip sack in the third quarter, and took several hard hits during the game which won’t do his 40-year-old body much good in the long run. Brady still enjoyed a 300-yard passing game (303 yards), but the Patriots didn’t finish several scoring drives which kept Tampa Bay in the game until the very last play of the game.

New England was penalized 12 times for 108 yards, and some of the penalties will cause Bill Belichick to lose lots of sleep. Nate Solder was flagged for a peel back block (a 15-yard personal foul) in the second quarter, but the Patriots still managed to score a touchdown anyway. In one unbelievable stretch late in the first half, Deatrich Wise and Cassius Marsh were flagged for roughing the passer, enabling a field goal attempt by Folk, who missed a 56-yard attempt at the end of the half. Danny Amendola made a nice catch for 12 yards in the third quarter, but was called for a pushoff and the drive ended in a field goal. A punt by Tampa Bay on fourth and one was negated when Brandon Bolden was called for a neutral zone infraction, giving the Bucs a first down.

These are mostly penalties that the Patriots don’t commit. The lack of discipline by Wise and Marsh at the end of the half when Tampa started at their own 22 with less than a minute left in the half was plain stupid. Equally stupid was Bolden darting across the line of scrimmage on a Tampa Bay punt. Belichick will have fun at practice this week in exacting revenge for what the other guys usually do.

Give the Patriot defense credit for a much better game, but Jameis Winston helped out a bit with a very uneven game. His numbers were skewed by the end of the game, as Winston looked uncomfortable most all game long and seemed flustered at times. Given a defense on short rest that had been lit up for four straight weeks, Winston had every reason to lick his chops, and he instead spit the bit. Winston misfired on several throws, didn’t have any touch on his passes, and didn’t take advantage of his tall Pro Bowl receiver, Mike Evans.

That said, Stephon Gilmore did a nice job on Evans for most of the game. Evans finished with 5 catches for 49 yards and never hurt the Patriots. Patrick Chung did a nice job also, drawing mostly Cameron Brate and despite allowing an 18-yard touchdown pass late in the game, covered mostly well and didn’t allow big plays. Brate finished with only 68 total yards passing.

The win by the Patriots enabled Brady to tie Peyton Manning and Brett Favre for the most wins by an NFL quarterback with 186. He can become the winningest quarterback in history with a win a week from Sunday against the Jets. Brady finished 30 of 40 passing, one touchdown, one interception, and a passer rating of 94.1. It’s amazing that Brady still comes across these career milestones, that he hasn’t scaled these mountains already. But Brady will further advance his GOAT status with his next win, even though Brady will care only about the win itself.

Danny Amendola and Chris Hogan led the team with eight catches each, and Hogan hauled in a five-yard touchdown pass in the second quarter. Brandin Cooks led the team with 85 receiving yards. Rob Gronkowski was inactive for the game with a groin injury, which may have also contributed to the Patriots only scoring 19 points. Dion Lewis and Mike Gillislee combined for 105 yards rushing on 19 carries.

The Patriots did see Winston exceed 300 yards passing, but that was largely due to the game’s final drive. DeSean Jackson had 106 yards receiving, but 41 of those yards were on a slant pattern on the game’s final drive with the Patriots mostly defending the long pass and the end zone. Doug Martin, playing his first game following a four-game suspension, had a nice game with 74 yards rushing and a 5.7-yard average per carry. Martin was a much more consistent offensive weapon than Winston all game long.

Gostkowski continues to rebound from some of his kicking yips from last year, as he was perfect on four field goal attempts. The Patriots did eschew a 51-yard attempt early in the fourth quarter and punted from the Tampa Bay 33, and the final 49-yard field goal did hug the right upright but was still good.

The Patriots will play the Jets in a week and a half. Lots of continuing work can be done on improving pass coverage in this time, with a substandard Jet team waiting. The Patriots were lucky to come away with a win on the road in a short week despite giving up 409 total yards to the Buccaneers. The Patriots seemed in control for most of the game, and they will savor this win.

Until Belichick decides it’s time to eradicate those dumb penalties. The savoring will end at that time.

READ NEXT:
Patriots Win Ugly on the Road in Tampa Bay 19-14
Posted Under: 2017 Patriots Season