5 years ago at 6:30 am ET
Follow @SteveB7SFG
Posted Under: Patriots News 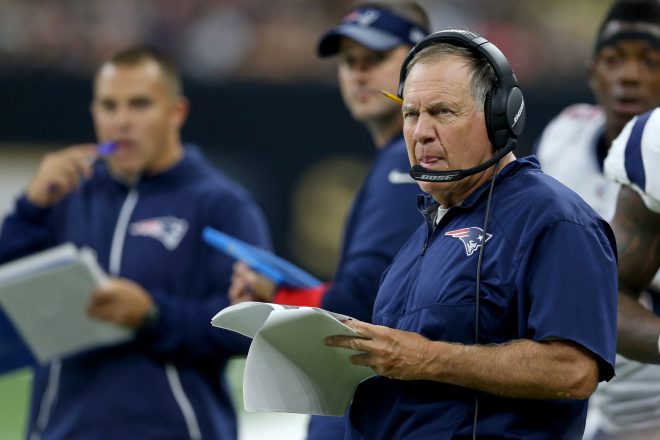 Tampa Bay is Up and Coming

The Patriots head out on a short week down to Tampa Bay to take on the Bucs on Thursday Night Football. And after losing to the Panthers 33-30 on the last play of the game, the Patriots are looking to quickly get back on the winning track. They lost the opening game of the season on a Thursday night and had 10 days to stew about it and know they have issues to fix on the defense. And don’t want to compound it with back-to-back losses.

Tampa Bay had a come from behind win over the New York Giants and this team is headed in the right direction. They have a nice mix of veterans and younger players and are a team on the rise. But like New England, while their offense is playing really well, their pass defense has been scuffling along. Something will have to give. Tom Brady will play the Bucs in Tampa for the first and probably the only time in his career.

Here are our Five First Impressions of the Buccaneers:

Jameis Winston is Having a Very Solid Season: The Tampa Bay QB is off to a very good start in 2017. Through three games, he’s completing 63 percent of his passes for 864 yards which averages out to 277 yards per game with six touchdowns and three interceptions for a passer rating of 94.8.

Winston has a favorite target in Mike Evans, the big 6’5 wide receiver has 19 catches for 227 yards and two touchdowns on 30 targets. But he has yet to find his chemistry with the speedy DeSean Jackson who signed a three-year $30.5 million-dollar deal with the Bucs this March. Jackson has nine catches for 143 yards and a score thus far but the duo has failed to connect deep in every game this season, which Winston has placed on himself. Slot receiver Adam Humphries has 14 catches for 156 yards.

Winston, in speaking with the media this week said that Jackson who has a flair for big games will look to break out in prime time against the Patriots.

Pass Defense is Struggling: The Bucs have a struggling pass defense as well as New England which means we could see a shootout on Thursday Night if things stay close to the norm for this season. Tampa Bay has allowed 947 yards in three games which averages out to nearly 316 yards per game. With Tom Brady and the Patriots offense coming to town, they too have their work cut out for them.

Tampa Bay has only one sack thus far this season thru the first three games. Obviously, this is an issue, they’d like to see rectified with the Patriots in town. If Brady gets time to throw, I’d expect him to have a really big game. Conversely, the Bucs have been very good against the run allowing an average of just about 78 yards per game and only 2.9 yards per rush. The sledding will be difficult for a Patriots running game that is still looking to get untracked. This will be one of those “pass to run” kind of nights.

It will interesting to see how the Patriots choose to attack the corners (Vernon Hargreaves and Brent Grimes) on Thursday. This may be one of those big Rob Gronkowski games spread out wide this week. Especially if Brady is getting time to throw. Grimes held Odell Beckham Jr. to just two catches for 10 yards on seven targets. They’ll probably align him on Brandin Cooks.

I would look for them to play their “12” personnel with 2 WR, 2 TE, and an RB  quite a bit in this game. Given the Patriots issues with covering tight ends, (see Dickson on Sunday), the Bucs may throw two of the big bodies at them and see if they can attack the seams.

Howard had a 58-yard touchdown against the Giants last week and no doubt the Patriots coaches have made mention of that in the meetings this week. It was a play that fooled the Giants and one the Patriots saw against Carolina where in a three tight end set, everyone went one way, including the defense, and Howard went the other all alone and uncovered. Expect to see that one this week.

Of course, if I am the Bucs, I put a bunch formation on one side of the formation on every snap and dare the Patriots to stop it, since this is what has given them fits all season.

The “Muscle Hamster” is Back: Tampa Bay running back Doug Martin returns from his suspension this week and he’ll probably play against the Patriots on Thursday night. Martin had a monster 2015 season with over 1400 yards rushing with 33 passes caught out of the backfield which resulted in his getting a nice five-year, $35.75 million-dollar extension which would keep him in Tampa thru the 2020 season.

But he played in only 8 games in 2016 and rushed for just 421 yards. He was suspended by the NFL for the violation of the NFL substance abuse policy. He entered a treatment facility for taking Adderall. He was suspended for the first three games of the year and he’ll definitely give the running game which has scuffled a bit a jump in production.

How effective he’ll be after not being able to practice for the past three weeks is up in the air. He may have a bit of rust or he could hit the ground on fire. It will be something to watch for.