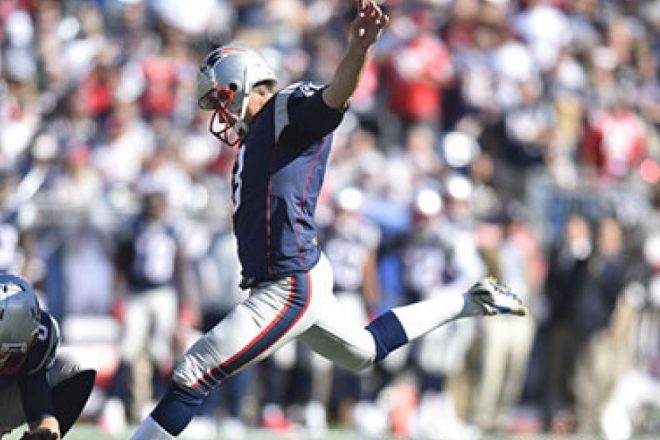 Ever since his 2015 extra point miss in the AFC Championship game against the Denver Broncos two years ago, New England Patriots kicker Stephen Gostkowski has received a modest amount of criticism and concern by many throughout the fanbase and media.

Heck, had the Patriots been unable to convert two, two-point conversions during their 25 point comeback in Super Bowl LI, the attention just might have returned back to Gostkowski again for extra point miss in the third quarter. The headlines of “playoff choker” and shades to Buffalo Bills kicker Scott Norwood back in the early 90’s.

But would any of this be truly justified criticism?

Through his first seven seasons as a professional, Gostkowski only had one season (2008) where he hit 90% of his field goal attempts before his rise to near-automatic kicker in 2013.

From 2013-2015, Gostkowski was by far the NFL’s best kicker, making a ridiculous 106 of 114 field goals, while continuing to collect an additional 147 straight made extra points to build his streak leading into the 2015 AFC Championship.  It was during this time, Patriot Nation really grew accustomed to Gostkowski being automatic in every situation. So no, perhaps it is not a matter of Gostkowski going on the decline as it is he did so well during this three year stretch, his standard rose.

Then of course, you know the story from there. Gostkowski misses the extra point in Denver, the Patriots are forced to go for two with the clock winding down in the fourth, and they wind up losing by two to the eventual Super Bowl champions. Was it Gostkowski’s fault for the loss? Of course not, but he was certainly shared the blame with the Patriots offensive line.

When it came to extra points, Gostkowski had both his regular season and regular season plus postseason extra point streaks snapped at different parts of the 2016 calendar year (523 in Denver and 497 straight against Pittsburgh respectively). The 2016 season was also the first time since 2011, Gostkowski didn’t lead the NFL in scoring.

Between losing both his streaks, not leading the league in scoring, and missing extra points in both the 2015 and 2016 AFC Championship games, followed by another in Super Bowl LI, the idea that Gostkowski was on the decline or lost all confidence gained even more momentum going into 2017.

In the 2017 preseason, Gostkowski struggled at times again, but told NESN’s Zack Cox how he remains focused following misses.

“I can only remember a couple of the kicks I have made,” Gostkowski said. “But I remember almost every one that I’ve missed. Kicking is like a love-hate relationship. You lose weeks of sleep over a bad game, and a bad game can be one missed kick. So the ones you make, you just try to build on the confidence with it, and the ones you miss, you just try to get it out of your head as quick as possible and try to make the next one.”

“It really is a challenge, because you become a perfectionist. You expect perfection, and it’s kind of tough when you don’t live up to those expectations. But that’s the way you show mental toughness, by getting back up, going out there and trying to do it right the next time. No one makes every single kick, you’ve just got to limit the runs of missing a ton. The challenge of the weather in New England, playing outdoors in the cold — there’s a lot of things you’ve got to work on on a daily basis.”

Within the organization, there was never any indication Gostkowski’s job was at risk and head coach Bill Belichick never did bring in another kicker to “compete”.   The team remained committed and patient with “Ghost” heading into 2017 training camp.

After the second game of the 2017 preseason opener against the Chicago Bears where Gostkowski missed a 56 yarder, making it three in his last five attempts, Belichick defended his kicker, saying on a conference call “I’m confident that he’s one of the best kickers in the league.”

“As it relates to Steve specifically, I think he’s had a good camp,” Belichick said. “He’s worked hard and he’s in good condition. He’s kicked the ball well and hit the ball very solidly and consistently. I know that he’ll continue to work hard to do everything that he can, and so will the other people involved in the operation – snapping and holding, however that turns out.”

So far in 2017, the patience has paid off, Gostkowski’s performance through the first four games reflects the Pro Bowl kicker of 2013-15, he’s converted a perfect eight for eight on field goal attempts to go along with 11 of 12 extra points.

On Sunday, Gostkowski added another team record to his resume with a 58 yard field goal that set a career high and Gillette Stadium record for longest in team history.

The kick surpassed Gostkowski’s previous career high of 57 yards versus the Dallas Cowboys in 2015, and moved him out of a tie with Adam Vinatieri to gain sole possession of the record.

After that career-long field goal from @Patriots #Gostkowski, gotta love the jump up high five between him & Branch 😁🏈Still like little kids pic.twitter.com/XfCHxcY045

It remains to be seen how Gostkowski’s season plays out over the next 12 games into the postseason, and whether or not he can achieve that elite level again, but as it stands, the kicking position still remains the least concerning position on the New England Patriots after the quarterback in 2017.