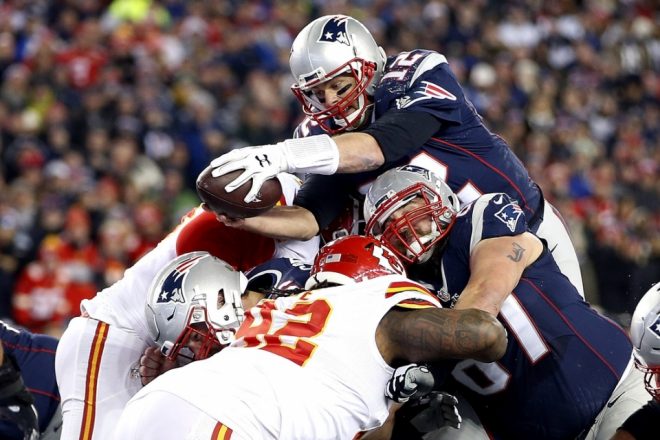 The Patriots, as well as the 2017 NFL season, kicks off with a Thursday night prime time matchup against the Kansas City Chiefs. The game will be televised nationally by NBC with Al Michaels and Cris Collinsworth on the call and Michelle Tafoya handling sideline duties. Kickoff is slated for 8:30 p.m.

The Patriots begin their quest to defend their Super Bowl LI title and are the last team to successfully win back-to-back titles in 2003-2004. The team will unfurl their fifth Super Bowl banner prior to the game and have asked that fans be seated by 8:00 p.m. for the festivities planned.

The Chiefs (12-4) won the AFC West and were the AFC’s #2 seed heading into the playoffs. But they lost a home playoff tilt to Pittsburgh 18-16 or they would have met the Patriots in Foxboro for the AFC Championship. In a salary cap move, the team jettisoned former #1 wide receiver Jeremy Maclin in the offseason, feeling that 2nd-year player Tyreek Hill is more than ready to assume the mantle as their top receiver. Tight End Travis Kelce had 85 catches for 1125 yards and four TDs.

Tyreek Hill is the Chiefs “X-Factor” on Offense: When the two teams meet on Thursday night, all eyes will be on the Chiefs wide receiver Tyreek Hill. He’s the new #1 wide receiver in just his second year and can do it all. In his press conference on Monday, Patriots coach Bill Belichick said the Patriots have to be ready for everything.

“I’m sure they have a lot of different ways to use him and he’s a very versatile player,” Belichick said. “He can run, he can catch … I’m sure they use him a decoy. He’s a very explosive player.”

“I don’t know exactly where he’ll be, but you certainly have to be conscious of him whenever he’s on the field,” Belichick added.

Hill loves playing in prime-time games and relishes his chance to shine in them.  He shined last season on a Sunday night at Denver, when he became the first rookie since Gale Sayers to score a touchdown by rushing, receiving and kick return. In another prime-time game against the Raiders, he caught a 36-yard touchdown pass and had a 78-yard punt return for a score.

Then Christmas night against the Broncos, Hill gashed their division rivals for a 70-yard touchdown run.

“I’m always trying to make the big play under the lights because everyone’s watching,” Hill said. And everyone will be watching him on Thursday.

The Chiefs Have Invested Heavily in Their  Defense: Kansas City the past several years has pumped a lot of money into their defense. In fact, their salary cap money tied to the defense is nearly 2-1 in favor of the defensive side of the ball. And it shows.

Justin Houston, the Chiefs linebacker has struggled with knee injuries the past two years but is reportedly healthy finally and looking to recapture the form where in 2014, he led the NFL with 22 sacks. He and Derrick Johnson, and Dee Ford gives the Chiefs the pressure they’ll need to compete again in a very tough division.

The team thought enough of Bennie Logan, that they allowed Dontari Poe to walk in free agency this spring. And with the Chiefs defense, they have one of the top corners in the NFL with Marcus Peters. Safety Eric Berry returns this season as well.

Since the 2013 season, the Chiefs defense is second only to the Seahawks allowing just 18.5 points per game.

There is No QB Controversy With KC, Alex Smith is the Man: When the Chiefs drafted Patrick Mahomes this spring, many predicted that the writing was on the wall for the steady, but unspectacular Alex Smith. And while Mahomes dazzled in the preseason, Andy Reid and the Chiefs coaching staff are sticking with Smith, at least for this season as the best chance to getting KC a deep playoff run.

Many Chiefs insiders have stated that despite the hype, Smith is still ahead of Mahomes by a wide margin. “Alex is so far advanced from the mental side,” GM Brett Veach said, “in regards to his ability to read coverages, to shift to better plays and really play the chess game. He’s so far ahead of what Pat is.”

Chiefs fans will have to be patient and let the rookie develop. In the meantime, Smith trudges along, and for the most part underappreciated. But rather than sulk about his successor being drafted, Smith relished his role. He has been a big help for the rookie and has doubled down on his own efforts at improving. It speaks volumes to his professionalism and to Reid’s staff.

Spencer Ware’s Injury Opens the Door for Kareem Hunt: The Chiefs, like the Patriots suffered an injury to a key member of their offense. The KC running game was supposed to funnel mainly thru Spencer Ware in 2017.  But after the talented back tore his PCL/LCL this summer, he was lost for the season. But also like the Patriots and their loss of Julian Edelman, the injury at least happened early enough for the team to be able to adjust accordingly. The next man up for the Chiefs is Kareem Hunt.

Hunt is a rookie from Toledo that had a terrific summer for Reid and the Chiefs. He brings a nice blend of power, speed and elusiveness to the backfield and behind a good offensive line should be primed to have a good season in KC. He’s a patient runner that reads the play and flow well and is a very good blocker in the passing game.

He’ll be backed up by veterans Charcandrick West and C.J. Spiller in the backfield. Teams ran at the Patriots middle this summer. It will be interesting to see how the Chiefs use Hunt on Thursday night.

Steven Nelson’s Injury Opens Up Questions at Corner: We already mentioned that the Chiefs have one of the NFL’s best corners in Peters. They lost a very talented youngster in Steven Nelson to IR, but hope that he’ll be able to return later this season.

But that doesn’t help them in the meantime and specifically on Thursday night. Who will the Chiefs play opposite Peters when facing Brady and the Patriots offense?  KC will probably opt for veteran Phillip Gaines who they drafted in the 3rd round 2014. He was a starter early in 2015 but suffered an ACL injury and was lost for much of the season. He came back late in the year but struggled, which isn’t rare since it takes a good 12-18 months to regain one’s strength and mobility. Now he’s back and seemingly fully back to where he was.

The other option would be to use veteran Terrance Mitchell. Mitchell was a player who bounced around a bit and found a home in Kansas City. The Chiefs used him as the nickel/slot corner and he played extremely well for them down the stretch and into the playoffs. Odds are, Reid leaves him right where he’s at, but they could do some mixing and matching depending on the matchups. Of course, nothing helps the secondary and cornerback play like a pass rush and with Houston back, the Chiefs will be looking to bring the pressure.

Check back with us later tomorrow as we’ll have a breakdown of the matchups between the Chiefs and the Patriots on what promises to be a very good kickoff to the NFL season.

By: Robert Alvarez
Patriots officially announce the hiring of Bill O'Brien as the offensive coordinator and quarterbacks coach for 2023.
13 hours ago

By: Robert Alvarez
Rob Gronkowski shares his thoughts on the Patriots bringing back Bill O'Brien to run the offense and voices his excitement and optimism.
14 hours ago

By: Mark Morse
This is the second article analyzing the team's performance and the future of the personnel.  The Offensive Line will come into focus in this piece.
23 hours ago