5 years ago at 8:37 am ET
Follow @IanLogue
Posted Under: Patriots Commentary 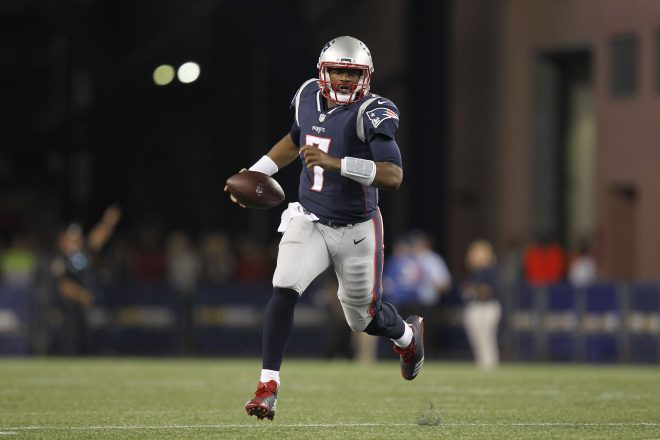 After not seeing action a week ago, Bill Belichick handed the keys to the offense over to Jacoby Brissett in the Preseason finale and gave him four quarters to get some work in as the former NC State standout attempted to finish strong during what will hopefully be his final action of 2017.

Given the performance, it’s safe to say that he accomplished that goal.

It was much needed, as Brissett struggled in his previous two outings, totaling 13-of-23 (57%) for 124 yards and no touchdown.  Coming into Thursday night’s game, Brissett had completed just 57% of his passes, with that completion percentage being miles behind Tom Brady (75%) and Jimmy Garoppolo (70%), with the second-year player struggling to play anywhere close to their level.

But Thursday night, Brissett managed to put together one of the best performances we’ve seen all preseason, completing 28-of-39 (72%) for 341 yards and 4 touchdowns, as well as one interception.

He was solid in all areas, completing an impressive 8-of-10 on third down for 109-yards and two touchdowns, as well as connecting on 5-of-7 down in the red zone with four touchdowns.

The second-year quarterback had an unbelievable first half, completing 10-of-11 (91%) for 113-yards, two touchdowns, and one interception.  On the interception, it was just a bad throw that came on a screen, with Brissett failing to throw the pass high enough, and it was picked off by New York and run back for a touchdown.

After the game, he didn’t make any excuses.

“You know, I’ve just got to throw it over the guy,” said Brissett bluntly. “That’s that.”

But the most impressive part of that sequence was how well he bounced back.  Following a three-and-out by New England on their ensuing drive, the Giants extended their lead to 10 at 17-7 after they put together a 14 play drive down to the Patriots’ 4yd line where they were stopped and held to a 22-yard field goal attempt.

That was when Brissett got to work.

He took them from their own 25-yard line down to the Giants 14 on a drive that saw him hit all four of his passes, including two plays of 23-yards, one for 11-yards, and the final one from 14-yards out as he connected with Austin Carr for the touchdown.   He showed terrific poise to settle back down and keep his team in the game, and he admitted that not harping on bad plays is something he focuses on.

“You learn that the game is so long and you can’t harp on the bad plays,” said Brissett.  “A lot of guys did a good job of stepping up. Anytime we had a bad play, we bounced back from it. I think that is a testament to those guys. They just came out there and [we] just played our butts off.”

He also finally lead them on what at the time appeared to be a game-winning drive at the end of the game, leading them from their own 31-yard line down to the Giants’ 37, giving Stephen Gostkowski the opportunity to drill the 55-yard field goal for the go-head field goal to put them up 38-37 with under a minute to go.  While the defense couldn’t hold the lead, it was a nice turn of events given that his previous two tries had come up empty.

While the outcome wasn’t quite what he hoped, the hard work he put in after not playing last week clearly paid off. While he hopefully won’t see another meaningful snap for a while, Brissett said Thursday night was a fun experience.

“That was fun,” said Brissett. “It makes you feel like a kid again. It’s hard to explain the words. You know, you wish the results were different, but that was fun. That was a lot of fun.”