Good morning and welcome to your Sunday Patriots news 8-27 and AFC East notes.

Patriots Lose Edelman for the Season, What it Means:
The Patriots worst fears were realized on Saturday afternoon when it was revealed that Julian Edelman’s right knee injury was an ACL tear and the valuable, versatile and hard-working cog of the Patriots’ offense will be gone for the 2017 season.

Edelman went down on a non-contact play against the Lions as he was cutting through the secondary on the Patriots first drive of the game. He caught three passes for 52 yards on the Patriots opening drive. 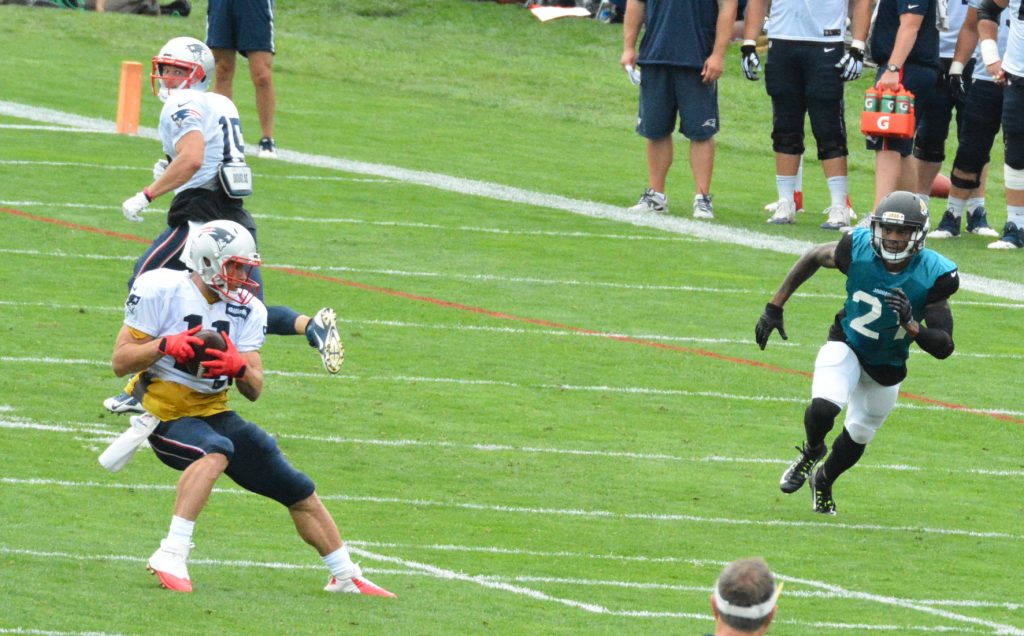 Julian Edelman was having a terrific summer before injuring his knee on Friday night. (SBalestrieri photo)

The normal mantra is for Patriots fans to call the old standby “next man up” and truthfully, as long as Tom Brady is under center, this team should be fine. But Edelman is Brady’s go-to guy on third down and you just don’t replace 90 or so catches and a 1000 yards at the drop of a hat. Look back at 2015, with Edelman, the Patriots were 9-0 and converting over 40 percent of their third downs. Edelman missed the last seven games and the Patriots went 3-4 and their 3rd down conversion rate plummeted to 32 percent. That wasn’t a coincidence.

This will put the onus of Danny Amendola and Rob Gronkowski to stay healthy this year. Amendola can pick up some of the slack in the slot with Brandin Cooks and Chris Hogan rotating thru there as well depending on the matchups. It will also affect the punt return game. Malcolm Mitchell’s role will increase as well.

Edelman has always been money at returning punts in big games. If Cyrus Jones falters this season, the team could have easily turned to Danny Amendola, but now his role will change, and the team may be forced to cut back on his snaps in that realm. That backup, perhaps primary kick returner may fall to Dion Lewis. If Jones should stumble.

There’s no beating around the bush here. Can they work thru this? Yes. But the idea that it is no problem, despite how deep and versatile they are is ridiculous. This is a huge loss for the Patriots offense. He’s Brady’s best friend as well as his most trusted wide receiver. Those two frequently can see something and react wordlessly at the line of scrimmage and run the correct play. We saw that on Friday night.

Patriots Release Kony Ealy:
The Patriots released DL Kony Ealy who they acquired in a trade with the Carolina Panthers just five months ago. They traded back eight spots in the 2017 NFL Draft sending their 2nd round draft pick for Ealy and Carolina’s 3rd round pick.

Ealy, 25, struggled to fit in the Patriots system from the beginning of training camp and struggled, although he seemed to pick up his play lately. He had a QB hit and three hurries in Detroit but also lost his containment on a few others. 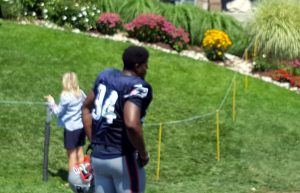 It was widely reported on Friday that the Patriots were actively shopping Ealy to see if that was any interest in the talented defensive lineman. But his commitment and work ethic have been called into question. If Ealy clears waivers, he will become a free agent.

The Patriots tried to find a fit for Ealy but he was either unable or unwilling to do what they required of him. One thing that stood out which may mean nothing but now is a curious question is, was he a malcontent in the locker room? We watched him walk out alone for practice on most days. Coincidence or not?

The timing is also curious too, do the Patriots wait and pluck someone off the waiver wire or make a trade?  Or is a trade partner already out there? It is not like Belichick to jettison a guy without a plan in place. Or was it just a case of not wanting to keep a player around that they have no plans on keeping.

Adam Butler Making a Push for the Roster:
Rookie defensive lineman Adam Butler has been making the most of his opportunities and now appears to have a good chance of sticking with the 53-man roster. He came on as training camp progressed and had a solid game against the Lions on Friday night.

The 6’5, 300-pound defensive lineman has exhibited some explosion off the snap and has shown the ability to disrupt plays in the backfield. With that kind of penetration and the ability to stuff the running game, his chances of making the roster are increasing.

With the release of Ealy on Saturday, Butler may find himself on the inside now. He’ll be a player to watch this week, both during practice and against the Giants in the preseason finale in Foxboro.

Gillislee Impresses in First Opportunity With the Patriots:
Patriots running back Mike Gillislee got into his first game action as a member of the team on Friday night after missing most of the training camp with a balky hamstring. Now declaring himself, “100% percent healthy” Gillislee had eight carries for 38 yards and a touchdown in Detroit. He also added a two-point conversion.

Gillislee is a one-cut, hard nosed runner who is expected to take up the slack for the departed LeGarrette Blount who is now a member of the Philadelphia Eagles. His touchdown run was an easy one, with James O’Shaughnessy and James Devlin both putting excellent blocks on the right side. Gillislee waltzed in.

“It’s been a long time since I’ve been in a game, last December, so I was just anxious to get out there and get that first hit,” Gillislee said after the game. “After that, I was good.”

First World Problems…Patriots Do Construction to Fit Super Bowl Banners:
The Patriots had a problem this summer that other teams would love to have. They had nowhere to hang their fifth Super Bowl banner. According to Mike Reiss in his Saturday column:

After internal meetings, the Patriots ultimately chose to have parts of Gillette Stadium undergo construction to make room for the new banner. That construction is close to its conclusion and the club tweeted out a sneak preview of where the banners will hang.

The Gillette Stadium sign was raised in the South end zone, creating room for the five banners — and possibly more in the future.

As owner Robert Kraft said on SiriusXM NFL Radio, “We’ve had to change the construction around. We have a little surprise for our fans [opening night], which should be very cool. 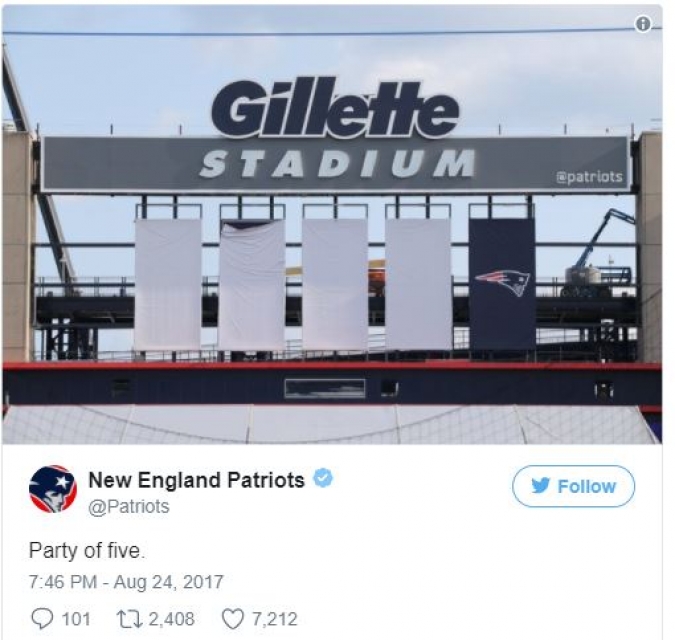 President Trump Gets a Super Bowl Ring From the Team:
Patriots owner Robert Kraft gave President Donald Trump a commemorative Super Bowl ring after the team’s visit to the White House in April. It seems that the Patriots who already came bearing gifts on their official visit felt that more was called for after the reception they received on visiting the Trump White House was the best they received in their five visits according to Kraft.

Trump received a customized, personalized ring that mirrored what the Patriots players and staff received. Those rings were crafted in 10-karat white gold and featured 280 diamonds with the words “World Champions” on the front. The inside of the ring includes, “We are all Patriots” and “greatest comeback ever,” a nod to the 31 unanswered points scored against the Falcons in the most dramatic comeback win in Super Bowl history.

The Super Bowl ring given to Trump is expected to be placed in the President’s Library at the end of his presidency. And according to federal watchdogs, he’ll have to claim the gift on his financial statements in 2018 as the gift is greater than $375.

East Bound and Down…AFC East Notes:
Bills Hoping for LB Ragland to Get His Burst Back:
Buffalo Bills second-year linebacker Reggie Ragland was supposed to push starting Mike Linebacker Preston Brown for the starting position this summer in the Bills training camp. But it hasn’t materialized and the team is waiting for Ragland to get his noted burst back in his game.

Ragland was taking first team reps a year ago when he tore his ACL on Aug. 5 during last year’s camp. Right now, he’s listed as third on the depth chart leading to some speculation that he’s on the trading block.

But as we’ve frequently seen with ACL injuries, it takes about 18 months for a player to fully get his health and speed back to where it was prior to the injury. The Bills seem to be patient and know that Ragland will keep improving as the season progresses.

Cutler Finding Chemistry with Miami Wide Receivers:
The Dolphins signed QB Jay Cutler after starter Ryan Tannehill went down with an ACL injury and the immediate question was, having never played with any of the Dolphins’ skill position players, could he find chemistry with and thrive in Miami’s offense. Early indications are looking good.

He seems to be developing nice chemistry with Devante Parker and he also connected with Kenny Stills and Jarvis Landry. He tossed a touchdown pass to tight end, Julius Thomas, while going 5-8 for 105 yards and a touchdown in their game on Thursday night against Philadelphia. While far from perfect it was a good building block for Cutler as he tries to find his comfort level in the Miami offense.

His best throw of the night was a 72-yarder where Parker won a jump ball. A deep throw to Stills drew a pass interference call in the end zone. It certainly looks like Adam Gase is going to take advantage of Cutler’s arm strength and test the deep parts of the field much more than the Fins were willing to do with Tannehill.

Jets Giving Hackenberg and Petty One More Look at QB:
The New York Jets, seemed like they were poised to go with veteran Josh McCown as the starting QB once the season began. But head coach Todd Bowles took a step back as McCown was relegated to a bystander as Bowles gave Christian Hackenberg and Bryce Petty split the reps as the team was preparing for their third preseason game.

While McCown remains the favorite to be the starter in two weeks, Bowles claimed late this week that the competition is still wide open and said that Hackenberg gets better the more he plays.

McCown has been getting the star treatment during the preseason, playing only one series in the first preseason game, but with a very limited wide receiver group, he needs to develop a chemistry with whoever is going to be out there.