5 years ago at 1:11 pm ET
Follow @IanLogue
Posted Under: Uncategorized

The Patriots dropped their second preseason game of 2017, putting them at 0-2 for the first time in the exhibition season since the 2008 and 2007 preseasons, the only times during Bill Belichick’s entire tenure they’ve started out winless over the first two weeks.

Given that this is only preseason, the final outcomes obviously don’t matter since it’s more about evaluating individual players and trying to build a roster.  Saturday night saw some starters back in the line-up, with Tom Brady, Rob Gronkowski, Brandin Cooks, Julian Edelman among players who saw action.  They held the edge against the Texans’ first team defense and played well, and then things began to drop off a bit from there and it became a back-and-forth effort that Houston eventually won as the Texans came away with the 27-23 victory.

Here’s a quick rundown of some players who made some noise Saturday night.

Tom Brady – Brady looked relatively sharp, finishing 6-of-9 for 67 yards along with a touchdown, which came on their second offensive series.  He spread the ball around, finding four different receivers on his six completions, hitting newcomer Brandin Cooks (7 yards), James White (4 yards), Danny Amendola (6 yards) and Rex Burkhead (catches of 16, 12 and 22 yards [TD]) during the two offensive series he was in for, which saw him engineer a touchdown drive on his final one.

It wasn’t all perfect, as Brady attempted a deep sideline throw to Chris Hogan on the first play of his final series, with Andre Hal leaping up and making a great play on an interception as the ball was slightly out of bounds.  Fortunately for Brady, Hal didn’t have full control of it heading out of bounds and the play was overturned.  Brady capitalized, marching the team 75-yards on 10 plays, which ended with a 22-yard touchdown to Burkhead.

Rex Burkhead – He had a strong showing in his first outing, picking up 20 yards on 7 carries while catching 3 passes for 50 yards including his 22-yard touchdown.  What stood out about Burkhead is his quickness and the power he hit the hole with, with him powering through several tight creases when it looked like he might not pick up much.  He was also terrific in the open field, showing great acceleration and shiftiness with the ball in his hands. If this is any indication of what he’s capable of, Patriots fans should be looking forward to seeing more from him.

Lawrence Guy – Guy played well, making some noise early on after he registered a sack on Texans quarterback Tom Savage on the opening drive to put the Texans in long yardage on that series of downs. It was a key play because it came right after Houston made a big play following Savage’s completion to receiver Bruce Ellington for a 37-yard gain, which got them down to the Patriots 12-yard line.  He also killed the drive when Houston went for it on 4th-and-6 from the Patriots 8-yard line, stopping Lamar Miller for a 2-yard gain and turning the ball over on downs.

Patrick Chung –  Chung had a decent night and made a little noise after he registered a bone-crushing hit on Texans running back RaShaun Allen, forcing an apparent fumble.  Unfortunately, while the play was overturned to an incompletion, it was still a nice moment for Chung, who fired up the defense after the third down play and it will likely be one that stands out in the film room for the veteran safety. 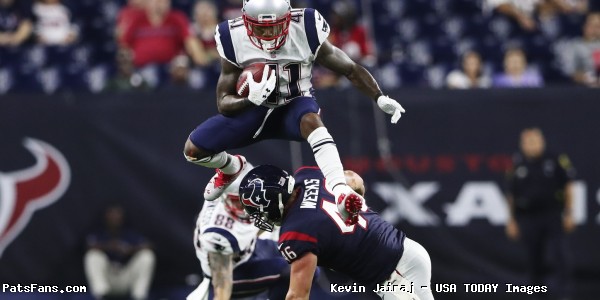 Jones finally had a strong performance in the return game. (USA TODAY Images)

Cyrus Jones – For the first time in his entire tenure with the team, Jones finally showed some confidence in the return game and really had a solid night returning kicks.  He finished the night with one kickoff for 17-yards but had 4 punt returns for 58-yards, including a 32-yard return that played a big part in putting the team in Houston territory and lead to a 38-yard field goal by Stephen Gostkowski and put the Patriots up 10-7 at the time.

Defensively, it wasn’t perfect, but it was better than last week.   Jones wasn’t beat deep but he had an ugly moment after Houston running back D’Onta Foreman caught a pass over the middle and then broke away from the first set of defenders, and  Jones made a half-hearted effort to wrap him up as Foreman powered away from him and went on to gain 63-yards.  The play lead to a 2-yard touchdown by quarterback Deshaun Watson, putting Houston back up 17-16 after the Patriots had built a 16-10 edge.

Kenny Moore –  Moore made a play to get noticed after he made a key stop on third down, coming up with a terrific 3rd down tackle in the fourth quarter where he read the play perfectly and brought Houston receiver Riley McCarron down for a 2-yard loss on a 3rd-and-14.  He also made a key fumble recovery on a punt return after Justin Coleman never saw where the ball was and it bounced off of him, making it a live ball.  Fortunately, Moore bailed him out.

D.J. Foster – Foster built off his performance from last week and this time played mistake-free after turning the football over last week against the Jaguars.  Foster, once again, showed great hands and explosiveness out of the backfield, rushing for 34-yards on 7 carries (4.9 avg) and catching 4 passes for 52 yards, including a 25-yard touchdown.  His touchdown was impressive, with Foster showing great burst as he busted into the endzone on his 25-yard touchdown catch and run that, at the time, put the Patriots back up 23-20 just minutes into the fourth quarter.

James O’Shaughnessy – O’Shaughnessy played well, catching 5 passes for 41-yards and looking pretty comfortable in the offense.  He’ll probably be a little sore today after taking a big hit in the fourth quarter following a reception, which saw him fumble the ball and fortunately it went out of bounds.  But overall, it was a relatively good night for him.

Elandon Roberts –  Roberts had a rough night.  He had a bad missed tackle on the opening drive,  and then later suffered an injury late in the 3rd quarter and was seen holding his right side as he was carted off the field.  Early reports seem to indicate Roberts suffered a rib injury that reportedly isn’t serious, which is good news for a player who overall is still growing in this defense. 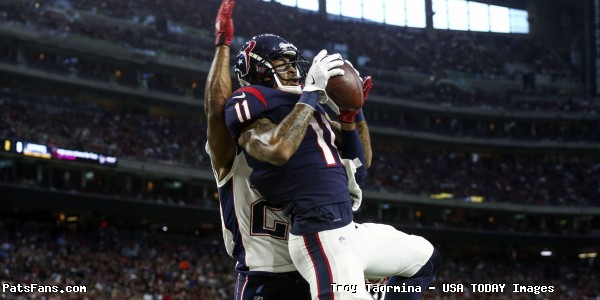 Butler had a rough night on Saturday in Houston.

Malcolm Butler – It’s not often you see Butler in this category but he’s likely feeling pretty frustrated after a rough night.  It started early in the game after he and Nate Ebner both lost Ellington after he broke away for a 12-yard pickup, and then he got beat on a deep pass to Ellington again after the receiver went up over Butler and high-pointed the ball and kept his feet in bounds.  One of the tougher plays against him came later on when he got beat on the next drive after Jaelen strong broke free from him for the Texan’s first touchdown.

Nate Ebner – He struggled on both defense after the aforementioned play above, and even on special teams where he was spotted with his feet planted on Houston’s kick return following New England’s first drive.  It’s odd to see from the normally reliable special-teamer, although like Butler, it’s better to have an off night now instead of when it really matters.

Justin Coleman –  Coleman had a special teams mistake after he wasn’t paying attention during a 3rd-quarter punt return where Lechler kicked a short punt and the ball came down and hit his right hand, making it a live ball that the Texans nearly recovered.  Fortunately, Moore was able to get it back for the Patriots and it was a big break for the team, and one Coleman needs to be mindful of moving forward.

Jimmy Garoppolo – It was an unusual night for Garoppolo, who wasn’t as sharp as he normally is. He finished 15-of-23 for 145 yards and a touchdown, but he made a significant mental error in the fourth quarter that essentially won the game for the Texans.  On the first play from scrimmage at their own 38, Garoppolo was under pressure and made a half-hearted sideline attempt to Jacob Hollister as he was falling back and it was picked off by Houston defender Denzel Rice.  Rice then took off 39-yards the other way before center James Ferentz finally ran him down at the 4-yard line.  Houston went on to score a touchdown to take 27-23 edge, which ended up being the final score.

That would be Garoppolo’s final pass of the evening before he was replaced by Jacoby Brissett on the ensuing drive.  Again, if there’s ever a time to make an error like that, preseason is the best time to do it, and it will likely be one that will motivate him when he gets back to work this week.

Kony Ealy – Had a Neutral Zone infraction on first down on the Texans’ opening drive.

Kyle Van Noy – Made a great play to get to Savage on a 2nd-and-3 to force an incompletion, but then he undid that positive play by keeping Savage wrapped up and driving him to the ground and drawing a roughing the passer penalty.

Harvey Langi – Played relatively well, finishing tied for the second-most tackles with four on defense.  However, he had one untimely error after he was called for illegal use of hands on a 2nd-and-7, which gave Houston a first down and two plays later, they scored on Strong’s touchdown.

Vincent Valentine – Valentine limped off the field late in the second quarter after getting shaken up.  Fortunately he came back and finished the game and would have even had a sack on Watson had offsetting penalties not wiped it off the stat sheet.

Jamil Douglas – He was shaken up in the third quarter for New England, but left the field under his own power.

The Patriots will now get back to work this week as they prepare to take on the Lions in their third preseason game in Detroit Friday night at 7:00pm ET.