5 years ago at 5:00 am ET
Follow @bob_george
Posted Under: Patriots Commentary

Of course you would love to see the Patriots shut up the 1972 Miami Dolphins and put a stop to those stupid parties they have when the last NFL team loses its first game in any given year.

The Super Bowl Champion Patriots came excruciatingly close ten years ago. Bringing an unthinkable 18-0 record into Super Bowl XLII against the six-seed New York Giants, the Patriots saw their perfect season go up in flames in Glendale, Arizona. A sick catch by David Tyree, an even sicker missed interception by Asante Samuel, arguably the worst game of Logan Mankins’ career, Ellis Hobbs being in man coverage at the worst possible time, all these factors added up to a 17-14 Giant win, and 18-0 became 18-1 for posterity.

It was revealed later in several reports that the Patriots were unusually tight for that game, with the pressure of finishing the year 19-0 seemingly getting to many of them. The fact that the two teams played a few weeks prior didn’t help the Patriots’ cause, as it was the Giants the Patriots beat to up their record to 16-0 in the regular season finale in the Meadowlands. Following that, the postseason wins over Jacksonville and San Diego were both sloppy and fraught with mistakes. The Chargers were without LaDainian Tomlinson and both Antonio Gates and Philip Rivers were hurt, but the Patriots only won by 9 at home to advance to the ill-fated Super Bowl.

The 2007 Patriots were fun to watch, until the rest of the league figured them out. It began with a tough Sunday night win at home against Philadelphia. The late Eagle defensive coordinator Jim Johnson showed how you could deal with the high octane Patriot offense. A backup quarterback, Jay Feely, showed how you could attack the Patriot secondary. The rest of the season from that point on was anything but dominating, but the team kept winning right up until the final game.

It took garrison finishes and history-making moments, but the Patriots have won two of the last three Super Bowls. They will try and duplicate their 2001-04 run of three titles in four seasons with a win this year. Malcolm Butler and James White made the plays that Rodney Harrison, Samuel and Hobbs could not. The Patriots now stand unchallenged as the best dynasty in NFL history, Tom Brady and Bill Belichick are now unchallenged GOATs at their respective positions, and the two wins have more or less relegated the two Super Bowl losses to the Giants to the dustbin of Patriot history. 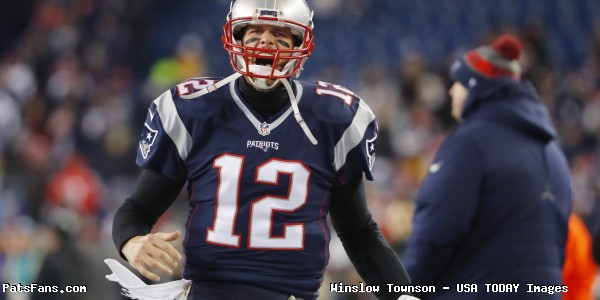 
In both the 2014 and 2016 seasons, the Patriots won the whole thing without going undefeated. There isn’t a Patriot fan claiming sanity that would trade these two title-winning seasons for a few more 16-0 seasons that go up in flames in the postseason. Winning the Super Bowl is what it’s all about, first and foremost.

Miami loves to continue to gloat over 1972. This writer saw that team live and firsthand, when they came to Schaefer Stadium on December 3, 1972 and beat the then-hapless Patriots, 37-21. Earlier in the season, on November 12, the Dolphins spanked the Patriots in the Orange Bowl, 52-0. The Dolphins ran up a 14-0 record against a schedule that was below .500 in aggregate strength of schedule. They won a Super Bowl against Washington that they almost gave away thanks to a hideous decision by kicker Garo Yepremian. But they did finish 17-0. There was no 19-0 in 1972.

Since then, Miami won the next year in Houston against Minnesota, and have won none since. They lost Super Bowl XIX to San Francisco in the heralded Dan Marino vs Joe Montana matchup. But that’s been it for the Fish. All these parties the 1972 Dolphins have look silly and ridiculous given that they have done next to nothing special in the ensuing years, while the Patriots are now looked at in a much better light than those undefeated clubs were then.

As Belichick loves to say, stats are for losers. 18-1 is one of them. One stat isn’t, that being their number of championships. How the Patriots get to that championship moment is immaterial, as long as they get there. Winning the Super Bowl is the only thing that matters. Going 19-0 in the process may be too much to ask for any team. The “any given Sunday” maxim is real. Some team will rise up and play out of their minds, or your team will simply hit a wall. But as long as you win in the end, the one or two hiccups along the way are completely irrelevant.

Now, if the Patriots should actually pull it off this year and run the table, that will really be something to cheer about. But it may be too hard to pull off, and Patriot Nation will gladly “settle” for a sixth Super Bowl title in an imperfect regular season. Watching Roger Goodell hand Bob Kraft still another Vince will be just as sweet, to quote the owner, whether the team lost four games, two games, or no games.

It all kicked off Thursday night. Nobody of consequence got hurt, everybody got their work in, and now they’ll move on to the second preseason game. Let’s see Brandin Cooks in a real game. Austin Carr gave us a glimpse of that guy that everyone was raving about. Can David Harris make up for the sudden retirement of Rob Ninkovich? And can Jimmy Garoppolo build off another strong night and continue to prove he could be the future?

Let’s keep the eye on the prize, and leave undefeated seasons for guys like Nick Saban and Geno Auriemma.