The Patriots have announced their first four days of training camp and this should come as welcome news to fans, especially those who live far away and make their travel/vacation plans according to the beginning of camp.

As of today, the schedule for the first four days will be as follows:
July 27 – Morning Practice (time to be determined, open to the public).

July 28 – Morning Practice (time to be determined, open to the public).

July 29 – Morning Practice (time to be determined, open to the public). Patriots Hall of Fame Induction Ceremony at noon.

July 30 – Morning Practice (time to be determined, open to the public).

The following week the Jaguars come in, although the dates have been finalized, the times have not yet been. Be sure to check back with Patriots.com for details and/or changes that may happen to the schedule.

August 7 – Joint practice with the Jacksonville Jaguars (time to be determined, open to the public).

August 8 – Joint practice with the Jacksonville Jaguars (time to be determined, open to the public).

When is a Roast Not a Roast? When the Patriots or Gronkowski is Involved:
For the latest in “let’s create a controversy” where there is none, go back to Thursday night and the Celebrity Roast for David Ortiz prior to having his number 34 retired by the Red Sox on Friday night. The roast was organized to raise money for the David Ortiz Children’s Fund. 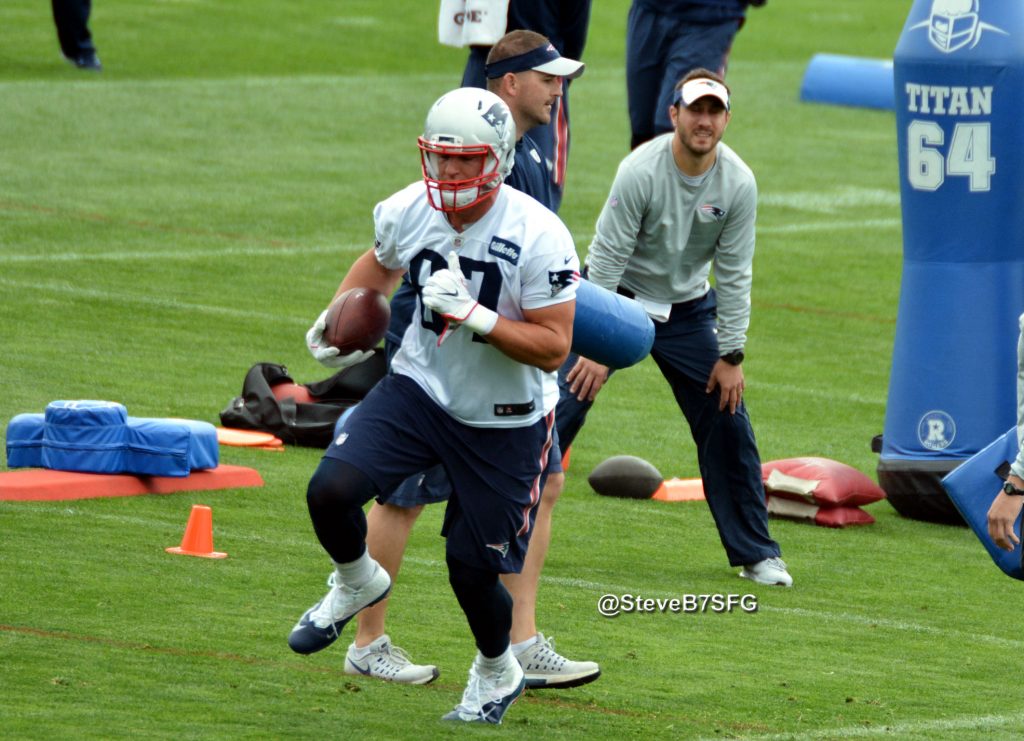 And all of the faux outrage directed at Rob Gronkowski for his off-color remarks at the roast? Please. It seems every time Gronkowski or Tom Brady appear in public, someone is trying to put a negative spin on these things. Originally NESN was going to broadcast it, but due to the numerous F-bombs unleashed by both Gronkowski and Dustin Pedroia, they shelved that idea.

Has anyone ever been to a roast? And the name of the game is that everyone and everything is pretty much fair game in those things. Nobody takes any of it seriously and it is all in good fun. To suggest Rob Gronkowski is an anti-Semite or racist need to remember his owners and one of his best teammates are Jewish and the majority of the team is African-American.

For those of you who are too young to remember, check out the Dean Martin Celebrity Roasts. Minus the F-bombs, those were more cutting and they were on national television. Besides, Gronkowski’s delivery of his scripted piece wasn’t the best and Pedroia was actually the better of the two.

Now I don’t walk in anyone else’s shoes, so it isn’t up to me to say who should or shouldn’t be offended and in talking with some Jewish friends this weekend, I know they were none too happy over this, however, I really doubt there was any malice intended on Gronkowski’s part.

So…What is the over/under that Gronk gets asked about this at training camp? Take the over.

Patriots Make It Official, Sign LB David Harris:
The Patriots made another splash in the free agent market this week by signing 33-year old linebacker David Harris who was unceremoniously dumped by the Jets last week after spending a decade with the team. In making room for Harris, the team released WR DeAndrew White.

Harris is a quintessential Bill Belichick signing. He is a smart veteran player who is well-known for his work ethic and steadiness on and off the field. He’s been remarkably durable over his career and still has some gas left in his tank. Belichick loves players who will buy in 100 percent and Harris is a guy who always put the team ahead of himself.

When veteran players leave teams, there will always be guys singing their praises but it is rare, very rare for a young player to equate a vet like Harris as a “father figure” as Darron Lee did. That speaks volumes about his character.

We wrote about why the team needed to kick the tires on Harris and why he’d be a great fit in New England, just a few hours before he was signed. You can read it here: The Jets are in a rebuild mode, we get that, but letting this guy go was a big boon for New England.

Patriots Go International, Brady in Asia, Edelman, and Amendola in Mexico:
With the team off until training camp, a few of the Patriots took some time to get some traveling in and Tom Brady and two of his favorite wide receivers were globe-trotting very visible last week. 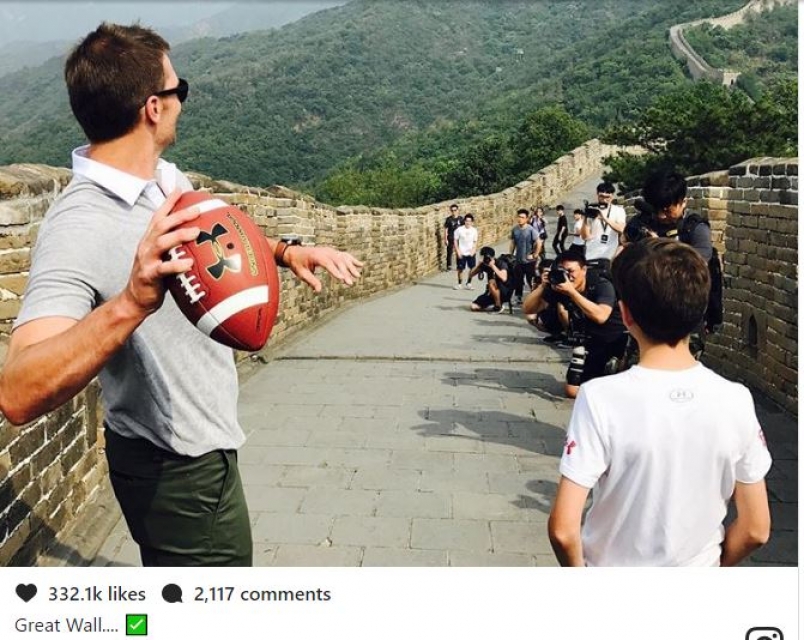 Tom Brady made a three-city tour for Under Armour and flew on the company’s corporate jet to make stops in Beijing, and Shangai in China before going to Tokyo. On Father’s Day he played catch with his son and some Chinese fans on the Great Wall of China and in Japan, he posed and grappled with some Sumo wrestlers.

Julian Edelman and Danny Amendola made a quick trip down to Mexico City for a visit to the stadium that the Patriots will play the Raiders in this season. The did an autograph session with fans, and visited the pyramids of Teotihuacán, outside of Mexico City… it is a steep climb up to the top! After that, not to be outdone by Brady’s Sumo shenanigans, they donned the wrestling garb of the WWE and did their best “Nacho Libre” impression. 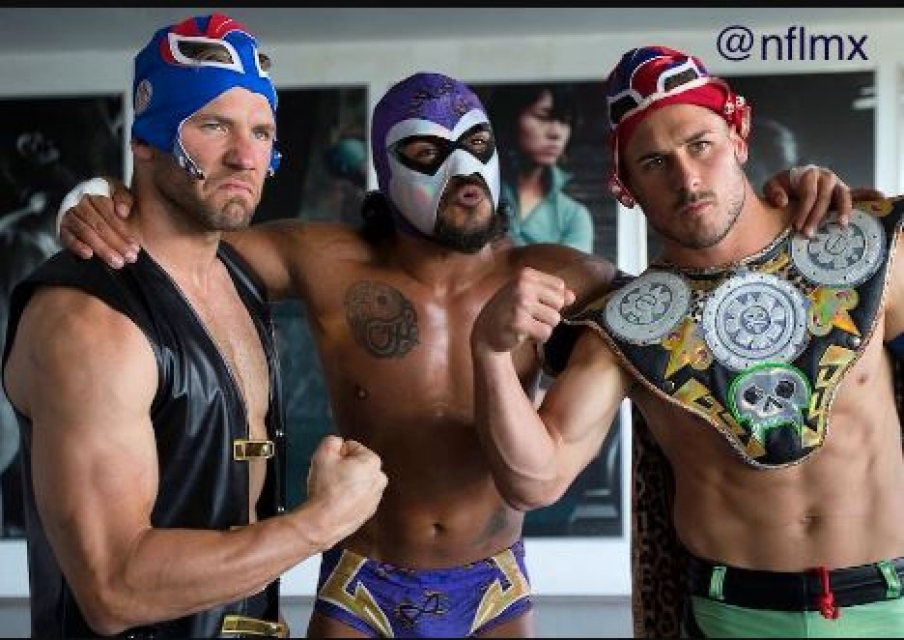 Carr’s Signing Puts Him Up as the Top Paid Players and Under the Gun:
First of all, let me preface this by saying that I like David Carr. When we saw him here a couple of seasons ago in Foxboro, I came away impressed and thought that he could be impactful if not an excellent quarterback in the NFL. And we’ve seen nothing from his play to change any of that.

The Raiders made a smart move, locking him up long term ($125 Million dollar contract) and backloading his contract so that a few of their other players (Kalil Mack, Gabe Jackson) can be signed as well. But if Carr were playing in another city, there would be a lot more talk about paying the most for a QB who hasn’t played a down in the postseason. It shows that at times, there is a double-standard for the QBs in the NFL. Brady and Aaron Rodgers now make far less than Carr. And we get it, it is all about the timing, but if Carr played in….say New York, the fact that someone was paying him $25 million a year without having tasted the postseason would be a talking point.

But now the pressure will be on him to produce, even more so than he did in 2016 in leading Oakland to a 12-3 record before breaking an ankle down the stretch.

Bills OG Richie Incognito Not Happy With Making Top 20 Hated List:
Buffalo Bills offensive guard Richie Incognito was named by the Sporting News to their Top 20 most hated players in the NFL in a piece penned by SN’s Mike DeCourcy.

DeCourcy has Incognito as the 9th most hated man in the NFL in his article, and he’s drawn the ire of Incognito because of it. Incognito did come to Buffalo under a cloud after allegations of harassing a teammate while in Miami that had Ted Wells (yes that one) investigate the claims.

But Incognito has worked hard for the past couple of seasons and has been a good citizen and a model teammate. He took to Twitter to voice his displeasure and blasted the SN piece hard, stating that people “hate his passion for the game, that he lays it on the line for his brothers every week and that the city of Buffalo has accepted him as one of their own.”

Oh, and BTW, do you want to guess who’s first on the list for most hated? Yep. And DeCourcy used the dead deflated football schtick…Maybe Incognito is on to something.

Dolphins Reached Out to Peyton Manning Last Year When Tannehill Got Hurt :
Miami head coach Adam Gase coached the offense and Peyton Manning in Denver and when QB Ryan Tannehill partially tore his ACL late in the season, Gase had only Matt Moore and a couple of JAGs on the roster.

So Gase reached out to Manning and tried to get him to come on board for the duration of the season. Manning’s father Archie relayed the story this week and said,  “It started with Gase,” Archie said. He said, ‘Hey 18, Tannehill went down.’ He said, ‘I think he’s going to miss some time. The first question I’m going to get at the press conference in the morning is if I’m going to try to bring you to Miami. What do you want me to tell them?’

“The text message came back from Peyton: ‘You tell them I could probably come play, but there’s no way I can miss carpool the next two weeks.’ So, he was done.”

Moore played well in relief and won two of three games to get Miami into the playoffs but could only put up 12 points in the team’s loss to Pittsburgh.

Jets LB Lorenzo Mauldin Arrested After Alleged Nightclub Brawl:
New York Jets Lorenzo Mauldin was arrested Wednesday and charged with misdemeanor assault after allegedly attacking a man in a nightclub fight back in April according to the New York Police Department.

Mauldin faces NFL suspension if convicted and could face up to a year in jail. He was accused of punching a 22-year old Queens man in the face according to the arrest report.

The NFL said that it will monitor the situation and investigate. “We have been monitoring developments and this matter is under review of the personal conduct policy,” NFL spokesman Brian McCarthy said.

The injured man, Jean Lopez claims he suffered several facial fractures after he accidentally spilled champagne on the Jets linebacker and Maulding responded by punching him.

By: Ian Logue
With New England sitting with little cap room, something had to give in order for them to get their final three draft picks signed.
4 hours ago