5 years ago at 8:00 am ET
Follow @IanLogue
Posted Under: Daily Patriots Rundown

Here’s a look at this morning’s top stories as we kick off this week.

Patriots Had Alternate Draft Plans – One interesting note that came out of Mike Reiss’ NFL notes on Sunday was the fact that the Patriots apparently had alternate plans for their first selection in the third round in this year’s draft.

New England traded down with Tennessee and moved back 11 spots in the third round, moving back from #72 to #83 following the transaction.  The reasoning behind why the Patriots apparently didn’t pick was because a player they wanted came off the board, forcing them to move on to the next player on their list.

According to Reiss, the Patriots were set to take Indiana’s Dan Feeney, but the Los Angeles Chargers snatched him away with the 71st selection and left New England with no other choice than to regroup and go in a different direction.  The Titans, meanwhile, selected receiver Tawan Taylor.  The Patriots went on to select defensive end Derek Rivers with the 83rd overall pick.

Feeney, who played both tackle and center in college, was a player who could have provided depth at both positions for New England, which are both spots, especially at center, that were lacking when the Patriots were on the board.

But following the draft, their loss proved to be Andrews’ gain after the Patriots ended up extending him on May 12th with a three-year deal, which will keep him here through 2020.  That’s great news for Andrews, who Jeff Howe of the Boston Herald reported earned the respect of Tom Brady after the center seemingly had a better handle on the line checks compared to former center Bryan Stork, and that ended up seemingly playing a role in Andrews taking over before the team parted ways with Stork at the end of training camp.

It’s obviously a reminder that the Patriots trading down is usually a signal that the player they were interested in might not have been on the board, which turned out to be the case with how things unfolded on draft day.  However, it’s certainly a great and well-deserved turn of events for Andrews, who has done his job well and has been a big part of New England’s resurgence on the offensive line, which will hopefully continue when the team hits the field this season. 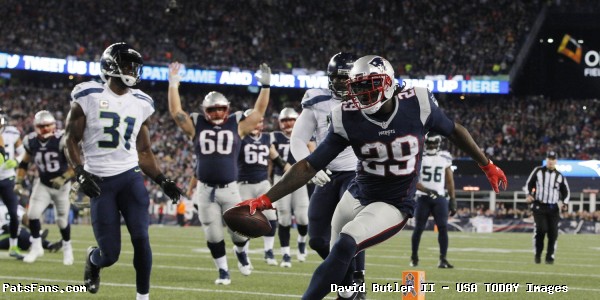 Blount’s position is rare to say the least.

Further Evidence Of How Rare Blount Tender Is – The news about LeGarrette Blount receiving the May 9 tender is something that has left most of us wondering about Blount’s reaction as well as why the Patriots’ opted to take advantage of the rule while other teams don’t.

As Ben Volin of the Boston Globe pointed out on Sunday, most free agents who don’t cash in during the period that would allow teams to be a factor in the compensatory formula typically don’t end up with big deals, so the fact that the tender includes 110% of the previous year’s salary usually doesn’t make sense from a fiscal standpoint.

Volin reported that former Packers president Andrew Brandt said he hadn’t seen a team use this in his 10 years in the league, and Reiss took it a bit further and pointed out that Peter Schrager of NFL Network’s “Good Morning Football” program said the last time this happened was back in 2000, although it’s not known which player received the tender.

It’s definitely a strange situation, and given the tendency for things to change after the Patriots take advantage of something like this, it will be interesting to see if the NFLPA will look to make changes in the future to prevent this from happening again. 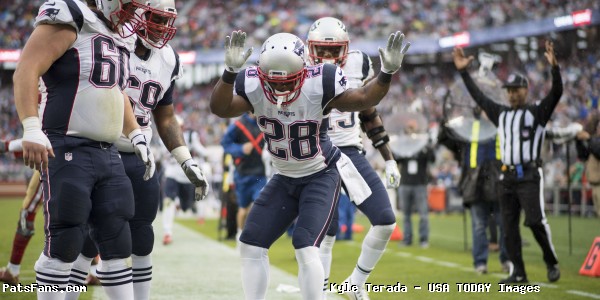 White has difficult incentives to reach in his new deal.

White’s New Deal Includes Difficult Incentives – James White’s contract extension may look great on paper, but Volin also pointed out Sunday that the veteran running back might have a difficult time reaching the incentives in his new deal.

The rushing yards seem unlikely given that White has 260 total rushing yards over his three years in the league, including the 166 yards he gained last season.  He’s never been a primary ball carrier, so the 1000 yard plateau seems somewhat out of reach.

His highest receiving total came last season when he finished with 551 yards during the regular season, which was ahead of the 410 he gained 2015.  Putting the two together, the 717 total yards he gained in 2016 was a career high and obviously pretty far off from the number he’ll need to hit in 2017 in order to hit the incentive for total yards.

Needless to say given the fact the Patriots already have Mike Gillislee, Dion Lewis, Rex Burkhead and potentially Blount, either the Patriots really do have bigger plans for White going forward, or his agent may not have served his client as well as he should.  As a result, it will be something to keep an eye on this season.

Running backs Visit Local Schools – Speaking of White, according to Wicked Local.com, the running back joined fellow teammate Brandon Bolden with a surprise visit to local schools back on May 3rd.

The two reportedly brought the Lombardi trophy to share with the students who got to hear about the experiences through Super Bowl LI, telling the story of their 25-point come back win over Atlanta.

White and Bolden also led students at each of the five schools in a touchdown dance contest and awarded the winners with the best moves with autographed footballs.  They also took photos with all the students and the trophy.

The team has always been active in the community and it’s fun to hear about stories like this, especially since they don’t always tend to get reported. And kudos to both White and Bolden, as it sounds like they definitely made everyone’s day during each of their visits.