We saw a lot of talk this week about the death of former Patriots tight end Aaron Hernandez and much of it had the word ‘tragic’ built into it. That story was anything but tragic unless the conversation has to do with his daughter, who will grow up never knowing her father, Odin Lloyd, who Hernandez was found guilty of murdering, or the other two young men who he was acquitted of shooting and killing outside a Boston nightclub just last week.

But even if he wasn’t convicted of their murders, he was most certainly there and don’t forget, he shot his own friend in the eye in Florida and left him on the side of the road.

Hernandez had the world as his oyster with a $40 million-dollar contract, of which he’d probably have seen every dime of and would still be young enough to see another big money deal. He was set for life. Instead, he pissed it all away and was doing life in prison because he’d rather be a street hood than catch touchdowns from Tom Brady.

Tragic? No, his actions, for which he was responsible for were stupid.

Blount Very Visible for a Free Agent Who May Not Be Back:
One of the more curious sights this weekend? LeGarrette Blount, the Patriots free agent running back who is rumored to not be returning, was out doing charity work with the team.

Case in point, Blount was in Grafton, Mass on Friday night for a charity basketball game between the Grafton Police against the Patriots All-Stars featuring the past and current members of the team. On Friday night, Blount joined current Patriots Brandon King, Justin Coleman, and Devin Lucien as well as alumni Patrick Pass, Mark Levoir, Vernon Crawford and Steve DeOssie. 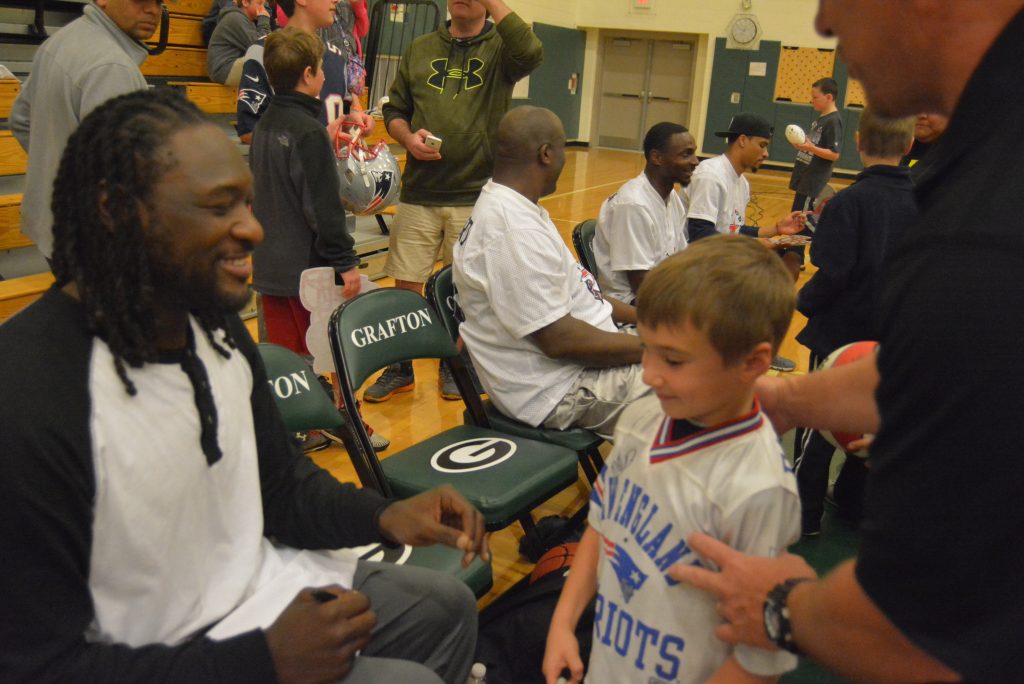 Patriots Add New Podcast to their Website, Featuring Price, and Banks:
Congrats to former WEEI Patriots beat writer and all-around great guy Chris Price. He and Don Banks will be hosting a podcast on Patriots.com “Cover 2 with Banks and Price” which will run on Tuesdays. Price has also authored his fourth book, “Drive For Five: The Remarkable Run of the 2016 Patriots” and it details the Pats run to the Super Bowl in the 2016 season.

Patriots Name Three Hall of Fame Finalists This Week:
This week the Patriots announced the three finalists for their team Hall of Fame induction in the Hall at Patriots Place.

This year’s finalists include CB Raymond Clayborn, DL Richard Seymour, and LB Mike Vrabel.  2017 will be Clayborn’s fourth straight as a finalist, Vrabel’s second, while Seymour is a finalist for the first time.

While all three are deserving, Clayborn is saddled with playing in an era before most of the fans who will vote, were even born. He was incredibly durable, playing in 161 straight games, still a team record. And he’s tied with Ty Law with 36 career interceptions. He was a member of the Patriots All-1970s and ALL -1980s teams.

Vrabel was also an integral member of the team’s first three Super Bowl seasons being a versatile defender who could also play offense in goal line situations. He caught touchdown passes from Tom Brady in Super Bowls XXXVIII and XXXIX. In 2007 Vrabel had an All-Pro season garnering 12.5 sacks.

Fans can vote online at the Patriots website here:

Patriots Schedule Has Some Intriguing Twists:
The NFL announced the league’s schedule on Thursday night, but as is typical when discussing the goings on at Park Avenue, it was leaked out much earlier. In regards to the Patriots schedule, they have some interesting factors that will play into their season.

The team opens the second half of the season by playing five out of six games on the road, including two in a row in high altitude cities. First in Denver, then the following week in Mexico City against the Raiders. The Patriots always seem to have trouble in Denver, and Mexico City’s stadium is about 2000 feet higher in elevation than Mile High.

The Pats bye week is located smack in the middle of the season after Week 8. And they open the 2017 campaign at home against the Chiefs on the league’s Kickoff Thursday Night Football game. Their Super Bowl rematch against the Falcons won’t be until Week 7, as Atlanta is celebrating the grand opening of their new stadium Week 1.

James White’s Deal A Win-win:
Once the details of the three-year contract extension for running back James White emerged, it was obvious that this is a deal that will work for both parties. White, who would have been a free agent at the end of the 2017 season, could have waited and possibly made more money, but he opted for the chance to stay in New England.

White’s three-year $12.69 million-dollar deal, which included a $4 million dollar signing bonus, works for both parties as it gives him an excellent chance of seeing every dime and for the Patriots.

It is a bargain signing, and it ensures White will be with New England in his prime years for a player who is a perfect fit for the team in New England’s offense.

The other news on the running back front is that Buffalo Bills restricted free agent Mike Gillislee will have to wait until Monday to find out if he’s playing for New England this fall or heading back to Buffalo. The Patriots signed him to an offer sheet for a two-year deal with most of the money being front-loaded into the first season.

Buffalo is strapped a bit under the salary cap and the Bills are pondering the decision on whether to match New England’s offer. They quickly declined to match on Chris Hogan’s offer sheet a year ago and already lost CB Stephon Gilmore to New England in free agency. Those situations may factor into their decision.

But by placing (some say foolishly) only a fifth-round tender on Gillislee, they opened the door for a team to come in and make him an offer. If the Bills do decline, they’d get the Patriots fifth-round draft choice

NFL Draft Begins Thursday Night but When Will NE Pick?
As things stand right now, the NFL Draft may be a pretty boring one for New England fans for the first two rounds because the Patriots probably won’t be picking in either one. We say probably because although New England doesn’t have a pick in either of the first two rounds, they can still wheel and deal right up to the final moment if they really covet a player.

The Patriots traditionally under Belichick have a much smaller draft board than other teams. They’ll scout extensively but then break it down to players who they feel will fit their system.

Someone DM’d us this week as to why they’re bringing in players for pre-draft visits that are slotted to go early in the first round when they don’t pick until #72?

Sometimes, I think it is a situation where they like this player and they want to see what makes him tick and could they risk moving up for him, or it is information they’ll store for attempting to bring in the player later? We’ve seen this with free agents Jabaal Sheard and Barkevious Mingo, both of whom the Patriots liked in the draft.

Sometimes they just want to see a player they feel they may face in the future and get a feel for him. It would come in handy when game-planning against some of those.

The Patriots had a private meeting with UConn safety Obi Melifonwu on Thursday. He’s slated to go either in the late first or early second round. With Belichick’s penchant for drafting safeties early, he’d be a tremendous addition to the strong safety position and an eventual replacement for Pat Chung but the team would have to move up to get him.

Amendola Restructures Contract for the Third Straight Season:
Patriots wide receiver Danny Amendola, to no one’s surprise, has restructured his deal with the Patriots, re-doing his deal for the third time since signing with the team four years ago.

He was scheduled to make $6 million and instead will make $1.6 million, a modest pay increase from what he made in 2016 for the veteran wide receiver. While Amendola is arguably the fourth option in the passing game, his production is nearly always at crunch time and comes in clutch situations. While it seems like a minor move, considering the other weapons in the Patriots WR arsenal, his signing is indeed a big move.

His vehicle was found abandoned on the highway a short distance away and deputies stated he was cooperative and answered their questions. Although according to some reports when asked what he was doing there, he responded to the Deputies, “Shoot me!” He was taken to the hospital for observation. However, no charges were filed.

Kouandjio was taken by the Bills in the 2nd round (44th overall) in the 2014 NFL Draft. He was not present for the Bills voluntary strength and conditioning program on Thursday. The Bills have reported that they are monitoring his situation.

Sheldon will work on in-game strategy with the coaching staff. Miami has already added a couple of coaches in the sports science and analytics department, with Wayne Diesel, the Dolphins’ sports performance director, and Dennis Lock, the team’s director of analytics.

Jets Limiting Media Access? Some Writers Think So:
The New York Jets had their share of off-field and on-field problems in 2016. There were altercations in the locker room, players missing or late for meetings, holdouts, unneeded drama and the team flat out stunk after being on the cusp of the playoffs the year before.

Now they’re taking steps to avoid at least some of the issues that plagued them a year ago. According to ESPN’s Rich Cimini, the Jets aren’t allowing the media to speak with newly signed free agents and were not allowed to speak with any players after they began their off-season conditioning program this week.

“While it’s unclear if this is a directive from [head coach Todd] Bowles, it sends a message,” Cimini said. “The team wants to eliminate potential distractions in the early, team-building stages of the offseason.”