We hope everyone is enjoying their Easter Sunday with their families and from all of us here, stay safe, happy, and healthy.

Belichick’s Four Keys to Success:
Everyone is always trying to pin down what is the secret to the success of the Patriots.  In an interview with CNBC’s Suzy Welch, Belichick handed down the four tenets of his leadership style. While these won’t jump off the page, to those who have followed Belichick and the Pats closely thru the years, it is all perfectly simple. 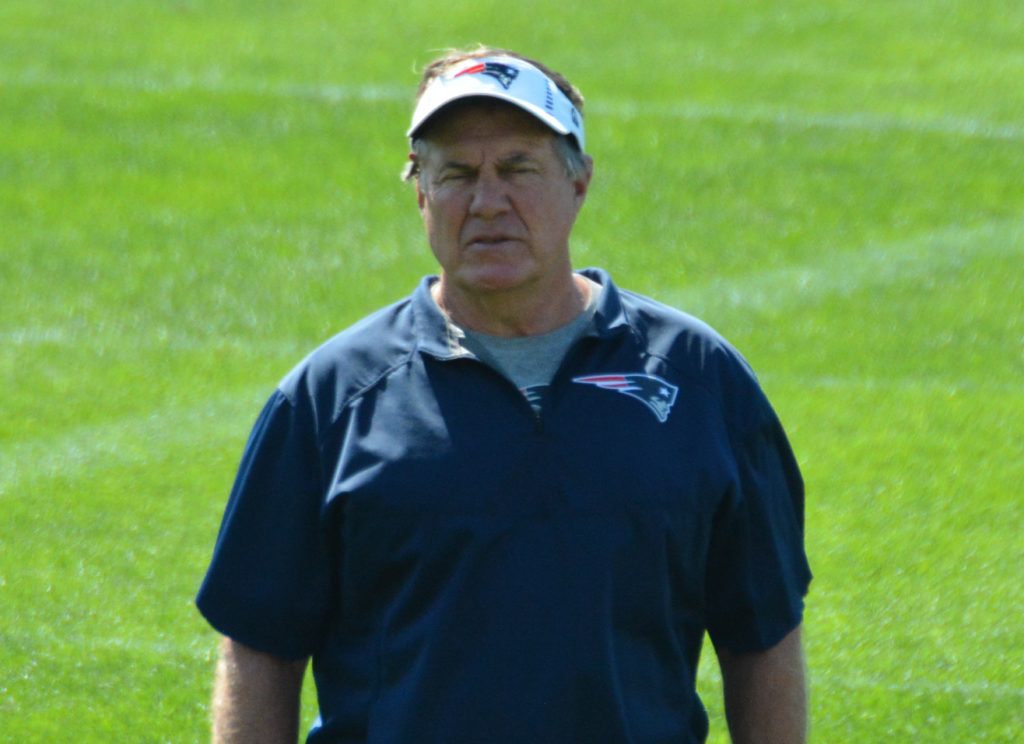 Bill Belichick opened up on CNBC about his leadership style this week in a very interesting interview. (SBalestrieri photo)

“We talk about today, and we talk about the next game,” Belichick says. “And that’s all we can really control. The rest of it will take care of itself.”

A Pair of McCourtys in the Secondary? Good Chance of that Happening:

With the news that Jason McCourty was released by the Tennessee Titans last week, an immediate destination was earmarked for the twin brother of Devin as New England. This is one rumor that we’ll buy into. Because it makes sense and is a fit for both the team and individual.

The Patriots targeted McCourty a few seasons ago but they couldn’t come to an agreement with Tennessee. It makes sense on a couple of different scenarios. If the Patriots trade Malcolm Butler, McCourty would share the duties of the #2-3 CB with Eric Rowe beside Stephon Gilmore. If they keep Butler, it would give the Patriots a secondary unlike they’ve had here in many, many seasons.

Gilmore and Butler would work outside and McCourty would work the slot. At 29, he’s still an effective player and he was due $7 million this season. Tennessee brought in Logan Ryan and also have Jonathan Cyprien, so they asked McCourty to take a pay cut. His refusal opened a possible door to New England. Speaking of Devin…

McCourty Explains Why He Won’t Go to the White House:
Appearing at an event at BU this week, the media quoted Devin McCourty, explaining his decision to skip the White House invitation by President Trump. The team will visit the White House on April 21.

“For me, it was just the different things that come out of the White House or the administration just didn’t agree or align with some of my views,” McCourty said.

“And you look at it now, I’m a new dad. And my daughter is growing up in this country…How will I explain to her why is there a photo op of me shaking someone’s hand if I didn’t agree with him? … I think it’s an individual decision. I think everyone on our team has the right to go or not go. But I think you should do what’s best for you. Do what you think is right.”

Being a long-time soldier, we always went by the adage, “you salute the rank and not the man”, so in that line of reasoning I think they should go and respect the office. But I’m not going to put myself in another man’s shoes. If he feels that strongly then I respect his right to stay home. That’s one of the beauties of living in this country. And what we’ve sacrificed so much for.

Another shot across the Bills’ bow? Possibly. The Patriots signed CB Stephon Gilmore away from the Bills this spring and WR Chris Hogan in 2016. This could be another former Bills player ending up in New England.

Gillislee, 26, is coming off of a breakout type of season in Buffalo as LeSean McCoy’s backup running back. The 5’11, 219-pounder is a north-south runner who carries the ball very effectively inside and in the red zone. He had 101 carries for 577 yards (5.7 YPC) and eight touchdowns in 2016. He added nine catches for 50 yards in the passing game.

The question would be, is the Patriots interest real or is it leverage against LeGarrette Blount (see below) to sign his offer with the team. The Bills placed a 5th round tender against Gillislee which in our opinion here would be a bargain. Stay tuned.

Marshawn Lynch Signs with the Raiders:

Mark this one down as a non-surprise. Lynch who was coming out of retirement to play for his hometown Raiders hit a snag in negotiations last week. He then leveraged Oakland by saying he’d welcome a deal with New England. We tried to tell everyone it was only a smokescreen, but the thought of adding “Beast Mode” to the backfield was too much for people to see through.

And presto! Oakland after hearing he’d be willing to go to New England quickly signs him to a deal. Lynch never had any intention of playing here but it was a brilliant ploy on his part.

Teen Who Helped Find Brady’s Stolen Jersey, Gets Invited to the Home Opener:
19-year old Dylan Wagner from Seattle got a phone call from Robert Kraft and was invited to go down on the field when the Patriots raise the banner on Opening Night. It was Wagner who tipped off the FBI through a friend in the ATF where Brady’s stolen Super Bowl jersey was.

He had dealt with Martin Mauricio Ortega in Mexico a year ago and as the two corresponded, they shared pictures of their NFL memorabilia collections. Wagner spotted Brady’s jersey and alerted authorities.

Kraft will fly him out for the Thursday opener and Wagner who hopes to meet Tom Brady will be on the field. Something tells me that an invite isn’t all he’s going to get.

Brandon King Signs Tender, Will Return in 2017:
The Patriots announced this week that S/LB/ST 3rd year player Brandon King had signed his free agent tender and will be re-joining the team in 2017.

Brandon King has been a standout Special Teams player since joining the Patriots. (SBalestrieri photo)

Bills Undecided on Fifth-Year Option For Sammy Watkins:
The Buffalo Bills have a decision to make on wide receiver Sammy Watkins for the 2018 season. On May 2, the Bills will either pick up the fifth-year option for the talented but injury prone wide out or let him test free agency.

On the surface it is a no-brainer, Watkins is slated to make only $3.1 million dollars in 2018. For a talented WR who is just 23, it would seem to be an open and shut case. But he’s missed 11 games in the past two years and has had surgery twice on the same foot.

With his season shortened with the foot surgery, Watkins caught just 28 passes for 430 yards and two touchdowns in 2016.

Miami Re-signs Two Exclusive Rights Free Agents:
The Miami Dolphins re-signed two of their own free agents this week, tight end Thomas Duarte and cornerback LaFayette Pitts. A seventh-round pick from UCLA a year ago, Duarte began the season on the practice squad before being activated to the 53-man roster. He appeared in one game.

Pitts went undrafted out of Pitt before signing with Miami. He was cut in September, signed to the practice squad and finally signed the active roster in November. He made three tackles

The Dolphins also hosted UConn safety Obi Melifonwu this week. Melifonwu was a first-team All-American Athletic Conference selection and his team’s top tackler in 2016, making 118 hits, 2.5 for loss, leading the team with four interceptions and with three passes defensed. He ran a 4.40 in the 40 and shined in positional drills at the NFL Combine.

The New York Jets suffered their third suspension in the past two months when CB Nick Marshall was suspended for the first four games of the 2018 season violating the NFL’s policy on performance-enhancing substances.

Along with Marshall, wide receiver Jalin Marshall and tight end Austin Seferian-Jenkins will begin the regular season on the suspended list. Seferian-Jenkins was arrested for a DUI in Tampa last season and will miss the first two games for violation of the league’s personal conduct policy.

Jalin Marshall will serve a four-game suspension for also violating the PED rules. He claimed that he mistakenly took a medication one time without receiving an exemption.