5 years ago at 8:08 am ET
Follow @SteveB7SFG
Posted Under: Patriots Commentary 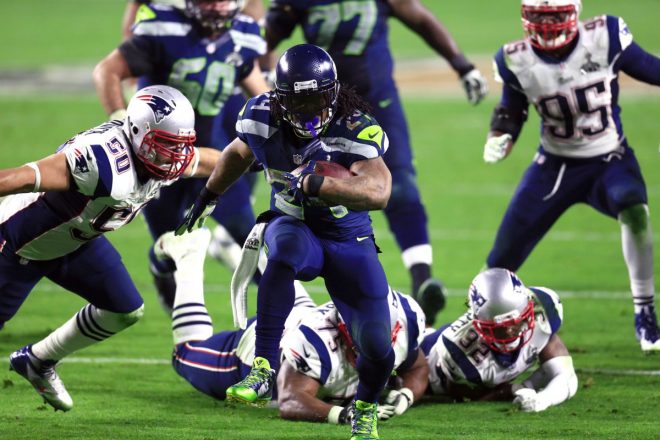 Marshawn Lynch to the Patriots? Sorry, that dog won’t hunt.

Yesterday reports surfaced from Jeff Howe of the Boston Herald tweeted out that the Skittles-loving, non-media talking bruiser of a running back said that if his talks with the Raiders fall through, that he’d be interested in going to New England.

Lynch retired after the 2015 season where he played in just seven games and rushed for 417 yards on 111 carries. It seemed like time had caught up to talented running back who had rushed for 1200 yards and 10+ plus touchdowns in the previous four seasons with the Seahawks.

Asked about his status last season, Lynch was adamant.

“I’m retired,” Lynch said in an interview with 60 Minutes. “Is that good enough? Which camera do you want me to look into? This one? I’m done. I’m not playing football anymore.”

But apparently, he’s had a change of heart. The Raiders need a bruising, power back and Lynch, if a year off from football had stoked his desire to play again as well as healed him up enough would be a great fit.

Seattle still owns his rights however GM John Schneider has stated that the Seahawks will not stand in his way should he opt to return. The Raiders’ need trumps Lynch’s desire to play football and that is where things get interesting.

Apparently, the talks between the two sides have hit a snag. So Lynch did what any good salesman does, he threw another hook in the water. He said that if the talks with Oakland break down, that he’d be interested in playing for New England if that happens.

The Patriots, not-so-coincidentally need a power running back too. And nothing would put the fear of God in the Raiders more than a re-energized, revitalized Lynch being part of the Patriots offense. LeGarrette Blount is a free agent and has reportedly turned down the Patriots offer to return.

The team has five running backs on the roster right now. Rex Burkhead, James White, Dion Lewis, D.J. Foster and Brandon Bolden but the power back position is one of need.

This little bit of leaked information will serve as a wakeup call to Blount and his agent as well. If you don’t sign with the Patriots with what they offered, they’ll move on quickly to someone else. Except Lynch did their dirty work for them.

Lynch never expressed interest in playing for the Patriots in the past, and I doubt that he has any now. This is just a leverage game he’s playing with the Raiders, the team that made him discuss coming out of retirement in the first place. It wouldn’t be shocking if Blount in the next few days decides that the offer by New England is good enough and he returns for the 2017 season.

But regardless of whether Blount or Lynch (very unlikely) signs with New England, look for the Patriots to add a youthful power back this spring. The draft has plenty of prospects and the team will be looking there.