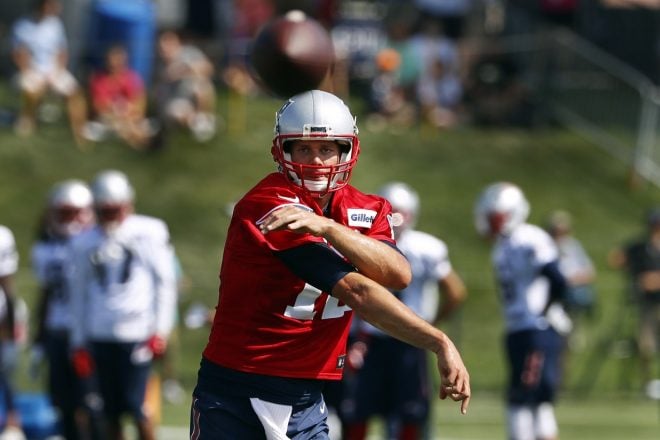 It’s Monday and here’s a look at this morning’s news as we get back to the work week.

Preseason Opponents Coming – We may know a little more about how the start of 2017 might play out by the end of the day, which will give us some context for the upcoming season.  The league will be announcing the preseason opponents for all teams today, which will at least tell us who the team will be facing when the exhibition season kicks off.

So far we know that Detroit will be the week three opponent, but that’s about the extent of it and Mike Reiss mentioned in his Sunday notes that the next question will be who the team might hold joint practices with.  That’s been something Bill Belichick has embraced in past seasons and has made for some of the most interesting days for fans attending training camp since they get the benefit of seeing some of the best players from both their team and the visiting club.

The release of the regular season schedule should also be known soon since the NFL tends to target the third week of April for when it’s normally announced.  That tends to be one of the best parts of the offseason since it allows everyone to start their predictions about how the upcoming season might unfold.

All it means is we’re that much closer to another season, which given how the offseason has already gone, should make for an intriguing year while we wait to see how some of the newcomers fare with this football team.

Blount and Patriots at Stalemate? – New England’s backfield appears pretty well stacked but is still seemingly missing the one big bruising back that can put them over the top in 2017.

Given some of LeGarrette Blount’s best moments last season, it’s hard to believe the two sides haven’t found common ground to bring the veteran back for one more run.

For Blount, he’s likely riding high after a career year in both rushing yards (1161) and touchdowns (18) but Mike Giardi of CSNNE reports that Blount has an offer on the table from New England that he must not be happy with.  Blount was spotted last week at a Celtics game where he jokingly told a reporter to tell the Patriots he’s “still got it” and to “give me some money.”

So apparently the money he wants is more than what they’ve offered him.  One would have to believe after how his last stint with another team played out, New England should have the leverage in this situation.  We’ll see if he eventually accepts the opportunity before the club potentially brings in someone else to replace him.

In the meantime, give Blount credit, he’s still doing the right things off the field and conducting himself like a Patriot after spending time this weekend making an appearance for Make a Wish Foundation for Massachusetts and Rhode Island.

Shannon Sharp Pulls Out the Race Card With Gronk – Rob Gronkowski is no stranger to having some memorable moments during the offseason and his latest antics apparently caught the attention of former Broncos tight end Shannon Sharpe.

Sharpe, who is the co-host with Skip Bayless on FS1’s Undisputed wasn’t impressed by Gronk, and he’s frustrated by the fact that the veteran gets away with more than other players who aren’t white, would get away with.

“He gets a pass, because guess what? That’s Gronk being Gronk,” Sharpe said via USA TODAY. “Let’s go back to the ’80s: Could Randall Cunningham or Warren Moon have done what Jim MacMahon did? Absolutely not. And that’s the problem. Listen, when a white guy does (something) it’s: ‘Aw man, that’s just him, that’s just Gronk being Gronk.’

“Let Odell Beckham do that. Let Cam Newton or Dez Bryant do that. . . Let them walk around chugging beers. First of all, the team wouldn’t go for it. And if the team would pass, the NFL would call them and say, ‘Look, ya’ll handle that.’” 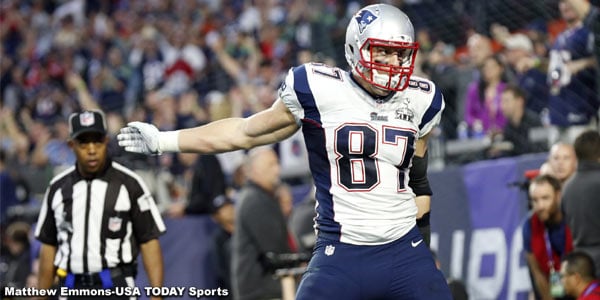 Gronkowski’s never been in trouble off the field and has always had a good attitude.


One thing that Sharpe doesn’t seem to realize is that Gronkowski’s off-field antics are far more harmless in nature and aren’t hurting anyone, and they certainly aren’t putting the team in a bad light.  Taking it a step further when comparing him to the players Sharpe mentioned, Gronkowski isn’t a player who complains to the media about the number of passes thrown his way, nor does he throw tantrums on the field.

He’s a guy that simply has some light-hearted fun and aside from occasionally looking a little ridiculous never causes the club or his fellow teammates any harm.

When trying to find another similar recent Patriots player to Gronkowski, Martellus Bennett is a player that comes to mind given many of the fun moments he had during last season as well as some humorous things he did off the field.  He came in with one reputation and certainly left with another, with most fans in New England likely agreeing that he was a fun player who spoke his mind but never hurt his team.

It’s really simple, guys who do things the right way all the time both on and off the field are the ones who get the benefit of the doubt and it’s pretty obviously that race has absolutely nothing to do with it.

Needless to say, as usual, it’s another statement made by a guy who might want to take a little time to think about things before he makes those types of accusations.

New Podcast, Site Coming From Cap Expert Miguel Benzan – Anyone who has followed the Patriots in this market for a long time should likely be aware of Miguel Benzan, who is the resident Patriots salary cap guru and the man who understands things even better than many within the local media when it comes to the team’s salary cap.

Having been a part of a small group of people who have had a site dating back to 1997, Miguel is one of the few remaining people from that era still going strong and even more impressive part is the fact that he just continues getting stronger in this market.

He appeared on CSNNE last month with Tom Curran and has seen his Twitter follower numbers  eclipse 10,000, with the Connecticut native now closing in on 20,000.

It’s been a remarkable run and he’s now going to be launching a podcast this week where he’ll be helping fans better understand the process the team goes through in trying to make everything work financially while remaining among the NFL’s elite.

Also in the works is a remodel of PatsCap.com, which will make it easier to find numbers for every player along with some additional features.

So some really cool things are on the way from one of the most terrific individuals in the business.  As a result, be sure and keep an eye on him, as he’s on an upward climb that will hopefully see him moving on to some great opportunities.  We’ll have a link to his first episode once it’s available, so keep an eye out and follow him @PatsCap on Twitter if you’re not already.