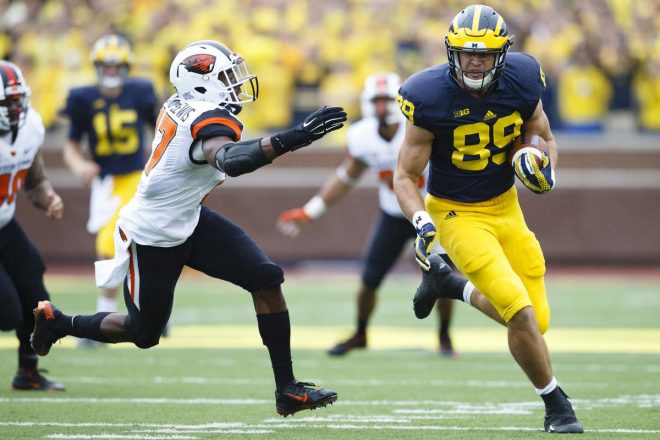 Player Injured in the Orange Bowl May Fall to Middle Rounds

The Patriots’ offense despite a plethora of weapons for Tom Brady can still use another tight end. Rob Gronkowski was injured for much of the season and was eventually placed on IR. Michael Williams, primarily a blocking tight end, tore his ACL in June minicamp and was also placed on IR.

Free agent Clay Harbor was signed but was released and fellow free agent Martellus Bennett who played very well for the Patriots all season and was their best target in the playoffs at the position was signed away in free agency by the Packers.

The team worked a trade for the Colts Dwayne Allen during the offseason and he and Gronkowski, if they can stay on the field (an issue for both) should give New England a terrific 1-2 punch. They still have Williams and Matt Lengel from a year ago as depth.

But adding another tight end would seem like the prudent thing to do, given the injury history of both Gronkowski and Allen. There are several intriguing choices but a hidden gem may fall into the middle rounds.

Jake Butt from Michigan is a very intriguing prospect as he’s a versatile target in the passing game that can line up in a variety of different positions creating matchup problems for the opposing defense.

He has good but not great size for an inline tight end at 6’5, 246-pounds and will have to get a big bigger and stronger to become a fully productive Y-type tight end (inline). But has very sticky hands, and shows good quickness off his release. Butt runs good routes and has shown the ability to get separation coming out of his cuts.

He has a large catch radius and is a good runner after the catch despite not being a speed guy. He’s a willing and tough blocker in the running game and does a decent job of pass protection as well. In 2015 and 2016 Butt was the Big Ten Tight End of the Year and put very solid numbers 51 catches for 654 yards (12.8-yard Avg) with three TDs in 2015 and 46 receptions for 546 yards (11.9-yard Avg) with four touchdowns in 2016.

He’s not going to attack the deep seams like Gronkowski but can be a very solid addition to the passing game by being a reliable target that gets open and will move the chains. With Gronk in the lineup, Butt can move around as the “F” or move-type tight end initially but the coaches will find ways to use all three with Allen as well into creating matchup wins for the offense.

– Very versatile, can line up in a variety of spots

– Runs excellent patterns and has a large receiving radius

– Very good hands, and a good runner after the catch

– Tore his ACL in the Orange Bowl, may not be ready

– Needs to get a bit bigger and stronger in the NFL.

What his Role Will Be:
Butt’s role will vary depending on the matchups. He can line up wide, in the slot, or inline. He’s a very good receiving tight end and while he may not be the deep seam threat the Gronk is, he’s a very good move-the-chains type of guy.

Yes, he may not even be ready to start the season due to his ACL tear in the Orange Bowl. So in 2018, he should be ready to go and having a year in the system, would definitely be ready for a bigger role.

Butt has all of the markings of being a very productive pro tight end. He’s got the frame to be a big, physical presence. He runs good routes and uses his hands well to create a bit of separation coming out of his breaks.

He’s good at recognizing the weak spots in zone coverage and will set down and give the quarterback a big target who will chew up zones. He’s not afraid to work the middle part of the field and will be a tremendous move the chains target.

He’s tough, competitive, comes from a big-time program at Michigan with Coach Harbaugh and will fit in very nicely with the Patriots offense. Bill Belichick loves players who are versatile and Butt will be able to highlight that side of his talent with the Patriots.

Butt is a 2nd round talent but may fall to the middle rounds due to his ACL injury and the fact that he may not be ready to start the season. The Patriots are in a great position with Gronkowski and Allen where they wouldn’t have to rush him back but give him all the time he needs to get completely healthy.