Hey, Tom, The Check is in the Mail, Brady Cashes In:
Tom Brady received a nice check on Friday, with his second bonus installment coming due Friday from the new deal he signed last spring. His bonus installment? $14 million dollars. Brady’s extension that he signed a year ago had him receiving the cash in two lump sums, $14 million at the time of his signing and the second installment on March 31.

Not that times are tough in the Brady household these days. Besides his pay and endorsements worth about $6 million in 2016, his wife has a tremendous business portfolio and earned an estimated $30.5 million last year.

That would be a ton of avocado ice cream.

Belichick Ditches League Meetings for Scouting Trips:
When it comes to the league meetings and the coaches’ breakfasts every season, Bill Belichick has always made it clear, he’d rather be having a root canal than attending one of those events.

He typically eschews those and this year had a perfect excuse. Right after the Super Bowl, Belichick said that both he and the Patriots were “about five weeks behind” everyone else’s NFL Draft prep.

Well, he’s been taking care of those items. Shortly after he was seen exchanging pleasantries with NFL Commissioner Roger Goodell, Belichick was seen at a couple of different Pro-Days scouting would-be Patriots. And who could blame him?

The league typically treats a Patriots-suggested rule change at the league meetings like kryptonite. But when someone else reiterates the same rule change Belichick did a year or two later, suddenly it is a wonderful idea. For the latest rule change fiasco let’s ask a Patriots player what he thinks.

Shea McClellin Lets His Feelings Known on the New Non-Leaping FG Block Rule:
One of the most athletic plays you could have seen during the 2016 Super Bowl run was the field goal block by Shea McClellin against the Baltimore Ravens on Monday Night Football. McClellin timed his leap perfectly and blocked a FG attempt by Ravens kicker Justin Tucker for his first and only miss of 2016.

McClellin dusted off his leaping act against the Falcons during the Super Bowl but the officials incorrectly called that he leaped over the center and not the guard and the Patriots were flagged for 15 yards. Now the NFL has deemed those plays illegal under the guise of “player safety”. We won’t get into a long discussion on this other than to say, isn’t it designed to avoiding contact with other players?  Things that make you go hmmm. One thing that won’t is McClellin’s feeling on this which was perfect.

Would the Patriots Kick the tires on Dion Jordan?
Big news out of Miami was the Dolphins released Jordan this week with a failed physical designation and of course, as with any other big name free agent, it immediately set the tongues wagging that the Patriots should scoop him up. But the problem with Jordan has always been, just that. He’s been a big name but not a big producer.

But his production never matched his hype and he’s only played in 26 games in four seasons. He missed the entire 2016 season with an injury and 22 more due to numerous violations of the performance enhancing drug rules by the league.

The Patriots have been a consistent spot for a number of players to breathe new life into their careers. Could Jordan be the latest? Sure, but something tells me they pass.

Patriots will not Draft Joe Mixon:
The Patriots and Robert Kraft have not backed down from their stance on bringing in domestic abusers, unlike the NFL. According to numerous sources, Mixon isn’t even on the Patriots draft board and will not be drafted by New England later this month.

Speaking to Jeff Howe of the Boston Herald, Kraft didn’t mention Mixon by name but did say this: “While I believe in second chances and giving players an opportunity for redemption, I also believe that playing in the NFL is a privilege, not a right,” Kraft said.

“For me, personally, I believe that privilege is lost for men who have a history of abusing women.”

Patriots Uniforms Changed Drastically 24 years Ago…for the Worse:
On Friday, the Patriots celebrated a 24-year anniversary on the date they announced a drastic uniform change that altered the way the team would look right up to the present day.

On March 31, 1993, then owner James Orthwein unleashed a new color pattern and logo to go on the helmet and the Flying Elvis was born. Instead of red, white and blue, the Patriots went primarily to blue with silver pants and red numbers and were pretty awful as uniforms go.

The team later tweaked them, changing over to a much better look to what they have now. But no uniform will ever replace the Pat the Patriot. 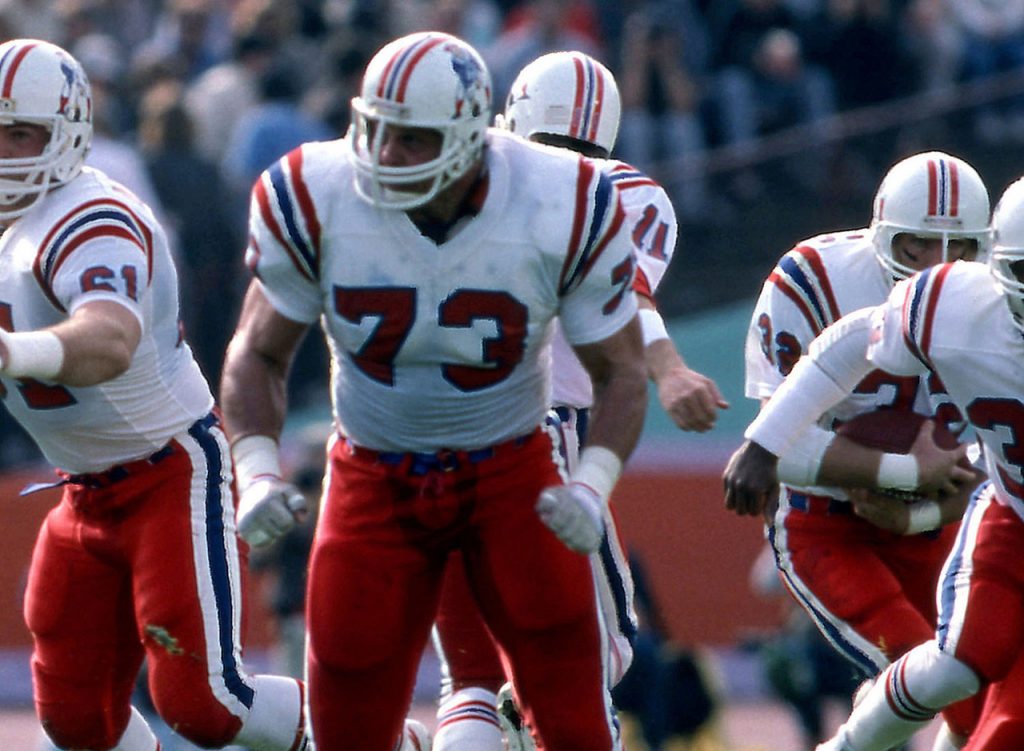 Kony Ealy Will Benefit Being in the Patriots System:
One of the more interesting notes from the league meeting was a quote about Kony Ealy from his former coach in Ron Rivera. The two questions about Ealy was never one of talent, but one of consistency and his ability to take to coaching. Rivera pretty much hit #2 square on the head.

“More than anything else is just really do what he’s told,” Rivera said. “I think being around a program like what coach Belichick has established in New England will be really good for him. I think it will be an opportunity for him to grow and take another step. I think it’s a good situation. I really do.”

“The biggest thing, more than anything else, is to do things the way coach Belichick wants them done.”

While some have viewed Rivera’s comments as a shot across the bow with his being traded to New England, the final word from his coach seems to point to him needing a fresh start to realize his potential.

“They’re getting a guy, I think, who hasn’t truly tapped his potential,” Rivera said. “He showed it. He flashed it in the Super Bowl. If they can get him back to that point, I think they’ll get a very explosive pass rusher.”

Bills Hire Image Consultant for Coach Sean McDermott:
The Buffalo Bills have not made the playoffs for 17 straight seasons and that makes for some strange happenings when it comes to the front office. Rex Ryan was jettisoned as Head Coach and Sean McDermott was brought in. Somehow GM Doug Whaley survived the offseason amid pressers where he left media members with the assumption that no one was in charge at the Bills headquarters.

Now with the hiring of an image consultant for McDermott, the new image is that the Bills will have one voice and that will belong to the coach, not the GM and not the ownership.

Whaley’s demotion of sorts is a no-brainer after basically throwing his owner under the bus during the search for Ryan’s successor. Former ESPN exec Gerry Matalon will work with both McDermott and Whaley and it is expected his role will increase.

But more than anything, the Bills need to start winning. Winning immeasurably will help their image.

But McDonald won’t be able to make a contribution until November. He’s facing an eight-game suspension for violating the league’s substance-abuse policy. McDonald has vowed that this will never happen again but his suspension may have turned other teams off from signing him.

McDonald, 26, is just entering his prime and is considered a hard-hitting, aggressive safety at 6’2, 217-pounds. The thinking is, Miami, who won 10 games a year ago, will want McDonald for the season-ending stretch and hopefully a return trip to the postseason.

Jets’ Bowles Will Be “Heavily Involved with the Offense” in 2017:
New York Jets head coach Todd Bowles spoke at the league meeting this week and said that for the first time in his coaching career that he’ll be involved with the offensive side of the ball, both during the week and on game day.

“I’ve been in meeting rooms up until this point, and I will continue to be involved,” Bowles told the media in Phoenix on Tuesday. “I’ll be probably heavily more involved than I’ve been since I’ve been here.”

“It’s just the way I feel as a coach, and have evolved to, and where I need to be,” Bowles added. “To understand everything from that [offensive] standpoint, I need to be heavily involved.”

With Bowles in the hot seat in his third season after a disastrous 2016, the move makes sense. His predecessor, Rex Ryan, always spoke about getting more involved in the offense for both the Jets and Bills and has now been fired by both.

But first, he really needs to find a quarterback.