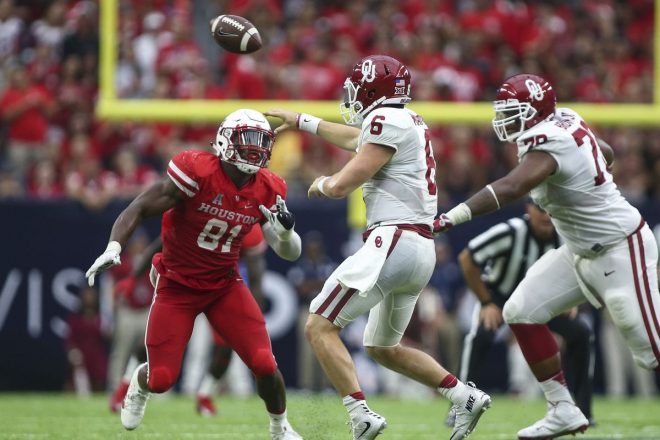 Ascending Edge Rusher May Be a Hidden Gem

The Patriots added Kony Ealy early in free agency in a trade with the Carolina Panthers. They swapped pick #64 for Carolina’s #72 and got the talented by inconsistent DE from Missouri. But the team needs at least one other edge rusher, possibly two to round out the depth and help the team get the pressure on opposing quarterbacks.

The draft has several talented and well-known edge rushers, but unless the Patriots swing a trade to move up into either Round 1 or 2 in the draft, they’ll be picking no earlier than Round 3. So, with that in mind, we’re looking at prospective players that may be around in Round 3 or below.

Tyus Bowser from Houston is a name to keep an eye on. Although he’s a bit of tweener, he has the explosiveness off the edge to warrant moving up in the upcoming 2017 NFL Draft. The Patriots dipped into the draft with the revitalized Houston program last season with Elandon Roberts and could be tempted to do it again with Bowser.

In a very deep class of edge rushers, he is a player that isn’t being talked about too much but is a very intriguing prospect. Bowser shows very good bend and shoulder dip when rushing off the edge. He’s got an excellent change of direction skills and his 3-Cone Drill time of 6.75 is excellent for a man of his size.

He improved against the run in 2016 and with further coaching at the next level there’s no reason to expect that not to continue. The one caveat with him is his size, would he be able to hold up physically and set the edge in the running game.

Bowser is versatile, and rush off the edge as a DE with his hand in the dirt or stand up as an OLB. He can drop and cover TEs or RBs in the flat. His pass rush repertoire needs some work. He relies too much on his speed and athleticism and can use some work with the coaches. But his ceiling is high and probably hasn’t scratched the surface of his potential yet.

– Just coming into his own, hasn’t scratched potential

What his Role Will Be:
Bowser would be initially, a sub-package pass rusher. With his athleticism, he could get after the QB and create some pressure. He can also cover tight ends and running backs as a standup linebacker in subs.

Will his Role Change from Year 1-2?
Yes, with improved play at setting the edge he could push for starting reps. Working with the coaches on his pass rush moves, the potential is there for Bowser to become a dominating type pass rusher.

What Current Player on the Roster Will He Replace?
Chris Long and Jabaal Sheard. Both have left via free agency

What is his ST Value?
Good, the Patriots will look to use him much like they did Barkevious Mingo a year ago. Bowser will quickly find himself on the coverage units that can utilize his athleticism.

Conclusion:
Bowser was a four-year player and a two-year starter for the Cougars. He has the versatility to play either as a 4-3 defensive end or as an outside linebacker. He dropped in coverage on about a third of his defensive snaps and can run with tight ends or running backs but he isn’t a deep coverage guy.

He missed five games with a broken orbital bone in his eye socket after an altercation with a teammate. It should be noted that he didn’t throw any punches in the incident so the off-field concerns aren’t a big concern.

Despite playing in just eight games as a senior, Bowser racked up some impressive numbers. He garnered 12 tackles for loss and 8.5 sacks. He measured 6’3, 247 at the Combine and playing around 250 pounds at the next level, he would be an intriguing target to play either as a sub-rusher at DE or as SAM with the Patriots.

He was generally considered to be a 3rd to 4th round talent as he’s still emerging and a bit of a tweener at his position. But after an impressive showing at the Combine where he flashed his athleticism, many now have Bowser going much earlier as teams love players who show quick twitch tendencies.

So, if he remains where he was envisioned, I could see New England taking a look at him in Round 3. A movable piece, Bowser can be moved around to take advantage of personnel matchups. He’d be a nice fit for the defense and has the versatility to play multiple positions and special teams, something Bill Belichick loves in his defenders.