6 years ago at 8:00 am ET
Follow @AllThingsPats
Posted Under: Patriots Milestones

At Kansas State Gronk’s younger brother was a second team All-Big 12 and first team Academic All-Big 12 in 2015. The Bills signed him as an undrafted rookie and he made the 53-man roster. Buffalo cut him the day after a week one loss to Baltimore, replacing him with Jerome Felton in a move to insure the veteran’s contract was not guaranteed.

A week later the Patriots worked out Gronkowski and several other players, and eventually signed him to the Practice Squad on October 1. Glenn won the Pats 2016 Ventrone Award, signed to the Practice Squad four times and released three times over the course of the season. He will have another opportunity this summer as the Patriots signed him to a futures contract on February 14.

1/28/17: Glenn Gronkowski having a blast in his first season with Patriots | Providence Journal

The Hoodie’s son attended Rutgers where he played lacrosse for four years and then was a walk-on long snapper for Greg Schiano. The younger Belichick came on board in Foxboro, spending four years as a coaching assistant. In 2016 linebackers coach Patrick Graham departed New England to work for the Giants. Brian Flores shifted from safeties coach to linebacker coach. At that point Stephen Belichick was promoted to fill the vacant position as safeties coach.

1/18/2017: Steve Belichick’s First Season As Patriots Position Coach Has Been A Success

At Purdue the linebacker was a first team All-Big Ten and teammate of Drew Brees and Matt Light. He was taken by Seattle in the fourth round of the 2004 draft. Koutouvides spent four seasons with the Seahawks, one in Denver and two in Tampa Bay, developing his niche as a standout special teams player.

The Patriots signed him in August of 2011 but was let go at the end of training camp. The Pats re-signed Niko in November the day after Albert Haynesworth was released, and he remained with the Pats for the rest of the season. In 2012 he was once again released at the end of camp and then re-signed, this time appearing in 14 games. In August of 2013 the Pats cut Koutouvides just prior to the start of the season. That marked the third straight time he had been released by the Patriots just before the start of the season. He finished his Patriot career with one start in 22 regular season games, and also appeared in five playoff games. Overall he played in 125 NFL games over five years, plus 13 post-season games – including two Super Bowls.

In 2013 Koutouvides became a principal and co-founder of Skala Partners, a real estate investment, development and management company in southwestern Connecticut. 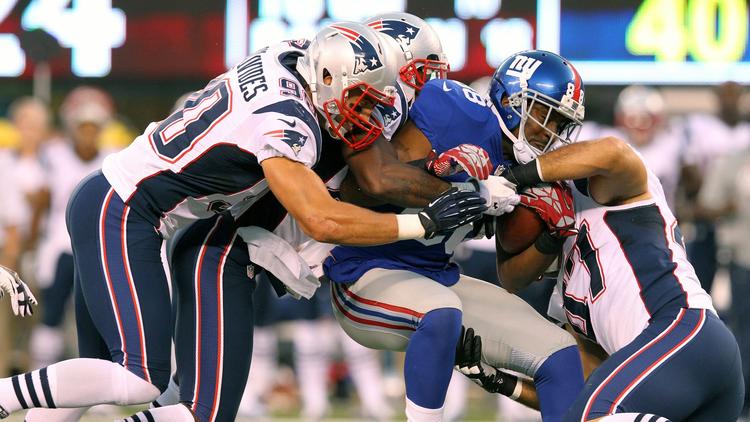 A two time All-Big 10 defensive tackle at Ohio State, Henson originally signed in his home state as an undrafted rookie with Cincinnati. After being cut by the Bengals, Ron Meyer in his first year as New England’s head coach signed the big man to fortify the defensive line. Henson made an impact, upgrading the interior pass rush. The defense allowed six fewer points per game from the previous season and the Pats improved from 2-14 to a playoff berth in ’82.

Henson played in 21 games over three seasons for the Patriots, registering three sacks. He later returned to Ohio, joining former college teammates in a successful auto dealership and is now Sales Director at a company in Columbus. At Texas Southern he was a speedy flanker and kick return man, playing in the same offense with four other future AFL or NFL players. Porter also excelled at track in college as a sprinter and hurdler. College teammate Leroy Mitchell, who was an All Pro corner for the Pats in 1968, recruited Porter to come play for the Patriots as an undrafted rookie.

Porter’s pro football career got off to a great start In the first game of the 1968 season at Buffalo he ran the second half kickoff all the way back to the Bills’ 45 yard line. On the first play from scrimmage R.C. Gamble (who was filling in for an injured Jim Nance) went the distance for a touchdown. That gave the Patriots their first lead of the game, 10-7. More importantly after a lackluster first half those two plays gave the Pats a much needed spark and momentum. The defense responded with big turnovers and shut Buffalo out in the second half and the Patriots won, 16-7.

Mike Holovak converted Porter from offense to corner, just as he had done with Mitchell. Porter was utilized primarily on special teams, leading the Pats in punt returns and kick returns, totaling 949 all purpose yards. That turned out to be Porter’s only season in the league. Later he became a high school assistant coach at Jackson, Michigan.

By: Robert Alvarez
The Patriots show off their customized cleats for the NFL's annual "My Cause, My Cleats" campaign over Instagram.
5 hours ago