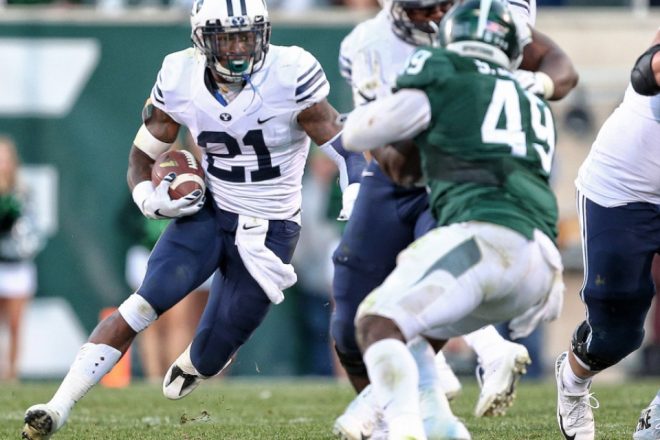 Big, Physical Running Back Can Be the Replacement for LG

Jamaal Williams from BYU would fit that description nicely. He’s got good size at 6’0, 220 pounds and is physical, productive back who can carry the ball between the tackles and churn out the yardage when the game has to be closed out.

When healthy (he’s had injury issues), he runs quick to the hole and with solid instincts and vision to see where the play will develop. He is not a dancer at the line, he’ll lower his head, runs with a low pad level and gets good yardage after contact. He carried the ball 234 times for 1375 yards  (5.9 yd avg) and 12 touchdowns in 2016 and added seven receptions for 80 yards.

Williams rarely gets knocked backward, always keeps his feet moving and has excellent ball security. He fumbles once for every 140 touches which is good news for Bill Belichick as his pet peeve for running backs is turning the ball over.

– Played in a Pro-style Offense

– Runs hard, low and smart and gets yards after contact

– Good hands although not used much in the passing game

– Not a breakaway threat

What his Role Will Be:
Williams role will be as the Patriots big, physical, move-the-pile back. He’d take over the Blount role, especially as red zone, goal line back

Will his Role Change from Year 1-2?
Yes, with his good hands, and work with the coaches on his pass blocking skills he could find himself as a bigger target in the passing game.

What Current Player on the Roster Will He Replace?
LaGarrette Blount, and Brandon Bolden. Tyler Gaffney was already released.

What is his ST Value?
Minimal, but that may change once he gets into training camp.

Conclusion:
Williams is an impressive, physical back when he’s healthy. While he’s had some injury concerns and off-field issues, he is a tough runner inside between the tackles, that will make yards after contact and keeps the pile moving.

His vision and lack of dancing at the line will be a boost to the Patriots short-yardage and goal line packages. He’s been used in a rotation at BYU and doing so with the Pats won’t be an issue at all for him. The Patriots are a pass first team especially with the backs in the system already but Williams will definitely have a chance to carve out a nice role for himself.

He’ll need to work on his pass protection, something that is prevalent with most of the big backs coming out of the draft this year. But he has good hands and could be used a bit in the passing game but those opportunities will have to be earned.

Williams isn’t the whole package yet, and with his injury history will no doubt fall to the mid rounds of the draft. That should place him in a perfect spot to be targeted by Belichick and the Patriots. I see him as a 4th round prospect that will have the ability to become a solid, contributor in the NFL. He’d be a tremendous fit for the Patriots offense.

By: Robert Alvarez
The Date and time for Vince Wilfork's Patriots Hall of Fame induction ceremony is announced by the team,
48 mins ago