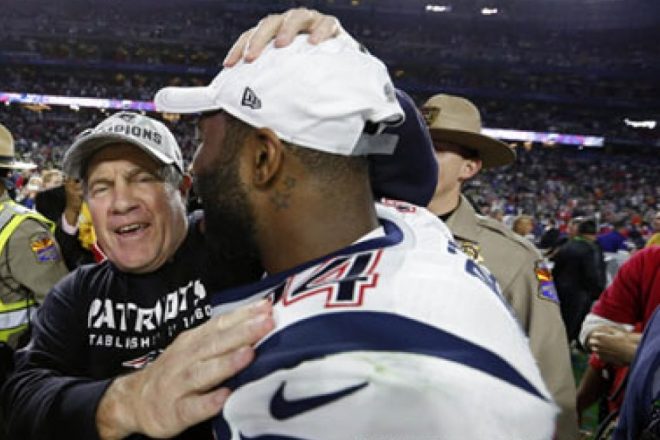 The Patriots made a big splash in free agency with the signing of CB Stephon Gilmore, formerly of the Bills and he’s locked up for the next several years. They’re also locked into an ugly struggle with Malcolm Butler their restricted free agent corner because of it.

They tendered Butler with a first round pick and the former UDFA corner is upset that the team paid Gilmore the money he feels he’s earned. Now he’s trying to find a home in New Orleans who may very well work out a deal for him. But if Butler goes, should New England bring back Darrelle Revis who was released by the Jets? I’d say a resounding no.

Revis came to New England on essentially a one-year deal and played very well during the Super Bowl run in 2014. He did everything that was asked of him and by all accounts was a good soldier and teammate that year. Butler himself stated that Revis was a big help to him and he credits Revis with helping him to become the player he is today. So, can the Patriots catch lightning in a bottle twice? Again, no.

The Patriots tried to bring back Revis in 2015 and offered him a big money deal worth in the neighborhood of $35 million. But the Jets were intent on bringing him back, even to the point of tampering with Revis. They didn’t need to. Revis who in retrospect, really wanted to go back to New York, got twice that amount from Gang Green. But he didn’t just get his ring, his money, and be on his way. Revis took parting shots at both Tom Brady and Bill Belichick.

Worse, during the Deflategate saga as it unfolded, Revis went out of his way to criticize Brady and the Patriots, basically calling them cheaters. Do you think that Bill Belichick may hold a little bit of a grudge there for this? It is possible. The backlash over his comments about Brady, Belichick, and the Patriots prompted Revis to send his mother to get his Super Bowl ring at the team ceremony in 2015. Except that the Patriots didn’t allow his mother into the celebration.

But the fans and even many members of the media are clamoring for a Revis – Patriots Part Deux, basically ignoring the fact that the past two years, Revis has been flat out awful, especially in 2016.

The 31-year old Revis has been a shadow of himself the past two years and in 2016, teams didn’t shy away from Revis, they attacked him, and sought his side of the field out. For the first time in his career, Revis allowed two touchdowns in a game to the same receiver. In this case, it was against New England and was rookie Malcolm Mitchell.

Revis was overweight, out-of-shape and lost a step. He claims to have already lost 10 pounds this off-season and wants a final shot at redemption. The Jets still owe him $6 million this year, so a one-year deal would be affordable. But would the Patriots pull the trigger again? If they’re smart…in a word no.

While Belichick can bring out the best in players, he doesn’t have a magic elixir that is going to make a player gain those steps he’s lost overnight. No doubt, he’s seen the decline in Revis and knows that he can’t do anything to stop the inevitable slide that has already begun in his game.

It never fails to amaze how fickle some people are. For the past two years, fans and media here in New England have been all over the “Revis is fading” storyline while touting Bill Belichick as brilliant for letting him walk to the Jets in 2015. Many of those same people now are clamoring for his return…And if he signs with his hometown Steelers, as he’s been politicking to do, watch those same people jump back on the “he’s finished” bandwagon.

But while the Pats possibly need another corner if Butler moves to New Orleans, they aren’t in a crisis. Gilmore, Eric Rowe can hold down the corners. And 2nd-year player Cyrus Jones should be much improved in 2017 or Justin Coleman can compete in the slot. And there is the draft.

But as much as Bill Belichick loves to stick it to the Jets, he knows what he sees. Revis is done, or very close to being done. That ship has sailed. And the Patriots should pass.