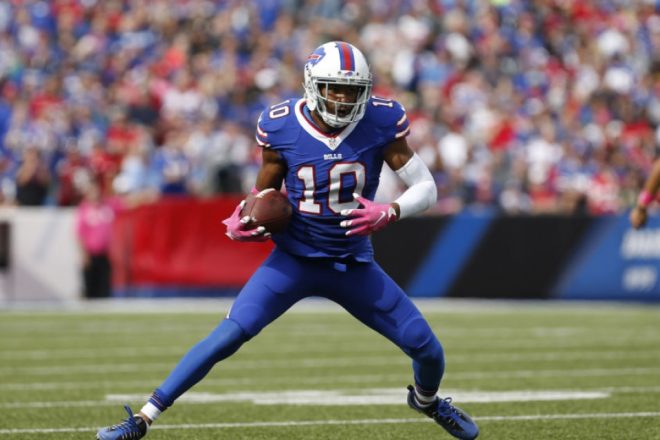 The Patriots are entering the legal tampering phase of free agency on Tuesday and will be busy buyers with $60 million dollars to work with. And although WR isn’t a particular position of need this spring, the news that they tried to trade for New Orleans WR Brandin Cooks and one of their targets in free agency is Buffalo WR Robert Woods was interesting to note.

While everyone is talking about adding another tight end to complement Rob Gronkowski and replace Martellus Bennett in the two-tight end offense, could Bill Belichick be switching gears again and going to a three/four WR attack? More to that below.

While Belichick was particularly effusive in his praise of Cooks during the summer after he shined in joint practices and a preseason game, that’s his M.O. He likes targeting players who play well against him. Cooks did it in 2015 and last summer in Foxboro where he schooled Malcolm Butler on the first day of practice against the Saints.

The same is true for Woods who has always played well against the Patriots for the Bills despite not having a stellar group of quarterbacks throwing him the ball. Woods was taken in the 2nd round (41st overall), in the 2013 NFL Draft from USC.

He’s 6’1, 200 pounds and while not considered a burner on the outside, he has decent speed and athleticism. But where he’s excelled is in his route-running skills, where he’s shown the ability to gain separation and has flashed very good hands. Woods caught 51 passes for 613 yards, hauling in more than 67 percent of the passes thrown his way in 2016 for the Bills.

Bringing in Cooks or Woods certainly wouldn’t be great news for Danny Amendola. The 31-year old is certainly facing having his salary redone again but bringing in either one of these wide receivers could mean he’d be a cap casualty in New England. The Patriots would certainly like to get a bit younger at WR with both Amendola and Julian Edelman turning 31 this season.

Cooks is more of an explosive receiver, but Woods excels in the areas that the Patriots love to work in, the short to intermediate parts of the field. And most importantly, he is very good at working the middle of the field.

Watching the NFL Combine on Monday, one can’t help be impressed with the number of big corners coming out in the draft. These big guys are fast but the one area that they could struggle in is in the short area quickness, something the Patriots excel in.

So, while everyone is now going to the two, big tight end offense, could Belichick and Josh McDaniels be switching things up and going to a more three or four wide receiver attack in 2017? Or is the team’s targeting of Cooks and Woods just them trying to get younger and healthier at the position.

It is still much too early to tell that, but adding either one of these players in free agency may certainly be a clue that the offense will evolve again. Belichick is usually ahead of the trends in these things.

This will bear watching as the spring and summer unfolds.