We’ll be doing profiles on each of the free agents in the upcoming days and give you our take on whether they return or move on. One of the starters and a very important piece is defensive lineman Alan Branch.

The Patriots picked up Branch during the 2014 Super Bowl run after Chandler Jones injured his hip in midseason. The Buffalo Bills released Branch after a DUI arrest earlier that year. He then played very well but sparingly down the stretch for the Patriots and was an integral part of the team that defeated the Seahawks.

He was even more valuable this time around, being arguably the Patriots best interior defensive lineman all season long being a two-gap run stuffer inside and providing outstanding support against the run and the occasional pocket push against the pass.

Branch was originally drafted by the Arizona Cardinals in the 2007 NFL Draft and played four seasons for the Cardinals before playing well in two seasons for the Seahawks. Branch spent 2013 as a member of the Buffalo Bills. After playing well for Buffalo that year, he was given a three-year contract extension and paid a $3.1 million dollar signing bonus.

But like Michael Floyd this season, he let a lapse in judgment cost him. But since his release by Buffalo, he’s been a solid teammate and a veteran presence on the team providing very solid play next to two younger players inside with Malcom Brown and Vincent Valentine. 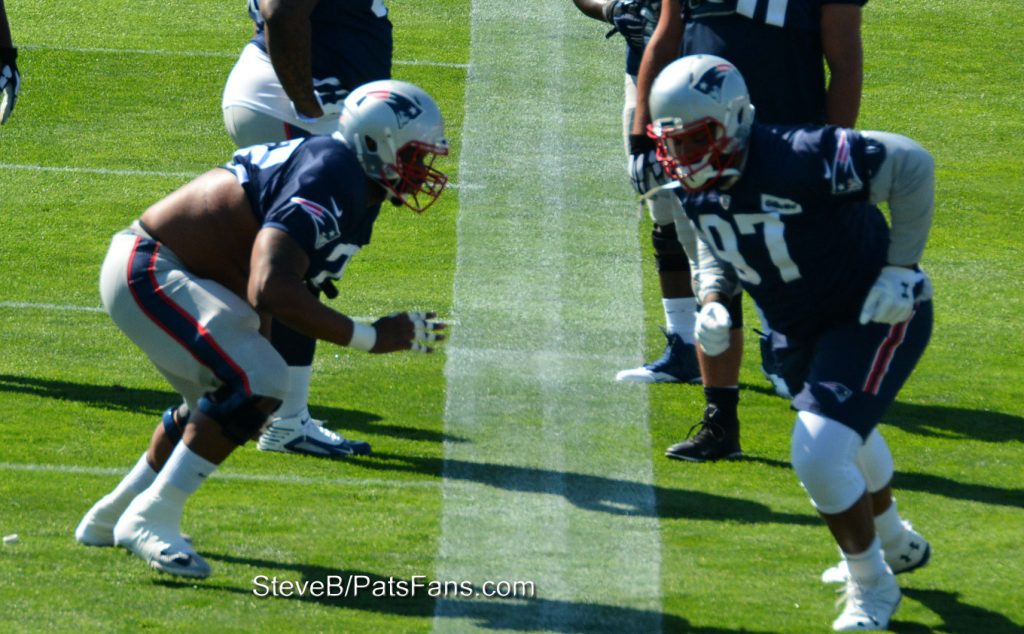 Alan Branch was a tremendous run-stuffer for the Patriots defense in 2016. (SBalestrieri photo)

Why Branch Will Return: The Patriots don’t have a lot of depth inside with just Branch, Brown, and Valentine along with Woodrow Hamilton and the three players have little experience. Brown finished his 2nd season and the latter two were rookies in 2016.

Branch at 32, shouldn’t break the bank in terms of free agency. After the last Super Bowl run he signed a two-year deal for a moderate sum ($5 million-dollar range). If he is willing to accept a similar deal again, it would be easy to see the Patriots paying him around the same amount of money with weight and playing time incentives worked in.

The Patriots are happy with his play the past few years as Branch has been a very solid performer both on the practice and playing fields. There is no reason to think he couldn’t continue to perform at a high level for the next season or two and provide the big immovable object inside, eating up two gaps which allow the linebackers to come in and make plays.

The 6’6, 350-pound Branch while an immovable force inside is quite athletic for a big man and enjoys skateboarding since he was a kid in New Mexico. He didn’t panic after a slow start in Super Bowl LI by the Patriots defense. Instead, he said, the players just trusted in themselves and the process.

“Honestly, we just started finally executing,” he said after the game. “We were on the field and we knew what we had to do, but we weren’t getting it done in the first half. When we came into halftime, we talked to each other. We weren’t down, we didn’t give up. We weren’t talking about rolling over or anything. We just started talking about being on our job, being more positive, having fun out there.”

Branch actually leapfrogged Brown this season on the Patriots depth chart and played more snaps than the 2nd year player after Brown in his rookie year, led the defensive line in snap percentage in 2015. Branch played just under 60 percent of the snaps after playing in under 40 percent of them last year.

Why Branch Won’t Return: Branch has won a pair of Super Bowls with New England and may be wanting to cash in one final time. There are always teams looking for veteran run-stuffing help inside and it is possible that a team will pony up more money than the Patriots will feel fits his value. In that scenario, one could easily see Branch leaving for one final payday in the sun.

It is possible that the Patriots will want to get younger at the position and bring in a rookie player that can stuff the run and play for about 20 percent of what they’d have to pay Branch to return.

Branch is at that age when the big men begin to break down and perhaps the coaches will feel that they’ve already gotten the best that they can ask for from Branch at this stage of his career and be prepared to move on. Remember, they did much the same thing with Vince Wilfork after Super Bowl XLIX.

Bottom Line: The Patriots coach Bill Belichick was asked about Branch earlier during the playoffs and praised his size and athleticism. The Providence Journal quoted Belichick as saying this about Branch:

“How unique is it? I mean, yeah, guys that weigh 350 pounds and are athletic and long like he is — I mean they don’t grow on trees,” Belichick said. “They’re hard to find. Ted Washington had that kind of length and size. Ted was 6-5, but Alan moves better than Ted does, or did at that point in his career. We’ve had some other longer guys like Richard Seymour or guys like that, but they weren’t 350 pounds. There’re not too many of them. Gerard Warren was a big guy that ran well. Money [Warren] was a very athletic player who wasn’t quite as long as Branch, but moving into that range.”

“It’s hard to measure the disruptive plays but he’s certainly got his share of those. He’s played very well for us in the running game. He’s given us a presence in the pass rush of a long, physical player in the middle. That’s all been really good, and he’s played more plays, so all of that is good.”

It will be interesting to see how this scenario plays out. Branch is a very valuable member of the defense. He was a key cog in a Patriots defense that was very solid against the run and his presence inside allowed players like Hightower and Roberts at linebacker to flow and make plays.

If the money is right, it is easy to see him returning for a final contract that will allow him to retire as a Patriot. He’s been very happy here in Matt Patricia’s defense and that factor may sway him to remain. But other teams love to pluck players off of Super Bowl-winning rosters to provide that type of presence and mentorship to their younger players. If someone ponies up the cash, he could bolt. Right now, I’d say it is even money that Branch returns in 2017.