We live in a fickle world, and Tom Brady’s greatness is fortunately what saved him from an offseason full of whispers following last Sunday’s heroic performance  to win New England’s fifth Super Bowl championship.

Trailing 14-0 and having battled hard to finally sustain a drive into Falcons territory at the Atlanta 23-yard line, Brady made a play that for weaker teams (and players) might have sealed the outcome barely one half into the contest.  On the play he had Danny Amendola double covered and threw it right to Atlanta’s Robert Alford, who caught it in stride and ran it back 82-yards for the touchdown.

It was the first pick-six Brady’s ever thrown in a Super Bowl and as he tried to chase down Alford, he dove in one final last-ditch effort to keep the Atlanta defensive back from going the distance.  As he lay on the turf, Brady could only watch as the Falcons were now firmly in control of the game, with the scoreboard now sitting at 21-0 with just over 2-minutes to go in the second quarter and the Patriots facing a huge hole that seemed much too deep to dig their way out of.

It wasn’t long after that play before Max Kellerman of ESPN, who has been beating the “Brady is going to fall off a cliff” drum all season, decided to offer up this gem:

Fortunately for Brady, he managed to put together a performance of the ages, including an incredible 4th quarter and overtime where he hit 10 of his final 11 passes.  It was worthy enough of his fourth Super Bowl MVP, but more importantly, his fifth Lombardi Trophy.

But that one moment, had the game turned and had New England’s defense also failed to stop Atlanta from running up the score even further, could have been enough to ignite the whispers this offseason questioning whether or not the greatest quarterback of this generation could finally find himself becoming a victim of father time.

The Patriots already find themselves having to ponder what to do with Jimmy Garoppolo this offseason, with the back-up quarterback having more than proved himself starter-worthy with his efforts to start the 2016 season.  Had Brady not played well, it likely would have made for a tougher decision about whether or not trading Garoppolo was a safe bet had Brady gone out and remained shaky for the remainder of the game.  It also would have led to a debate-filled offseason on sports talk radio and in the media wondering what the future could have held for the veteran quarterback. 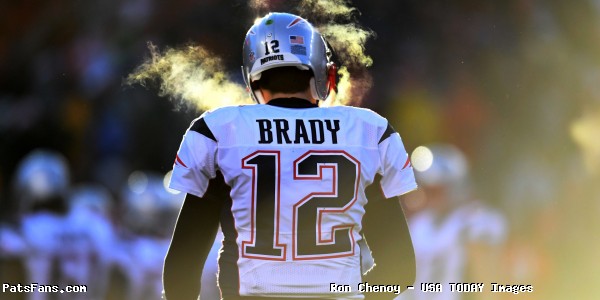 
Thankfully, the future Hall of Fame quarterback likely silenced any concerns people might have had after what they saw last Sunday night.  Brady’s no stranger to the doubters and fortunately the alternate universe he could have created for himself was erased as he marched up and down the field against a gassed Falcons defense that he completely wore out as he took over the game.  When the team won the toss to begin overtime, there should never have been any doubt of what was about to happen, which is a far cry from where he was as lay on turf watching Alford sprint off to the end zone earlier in the contest.

For some, one play is enough to make the difference between winning and losing.  Fortunately for Brady, he picked himself back up and showed that he’s still got plenty of better ones still ahead of him, which is what the great ones do best.

His critics might still be trying to push him over that cliff, but Brady did enough last Sunday night to turn the tables and instead, he knocked them all into the icy waters below while walking away with yet another title.

For now, there shouldn’t be any doubt and for Brady, the only thing likely on his mind this offseason will be how many more rings he can add to the other hand as he starts getting  himself ready to do it all again in the coming months.