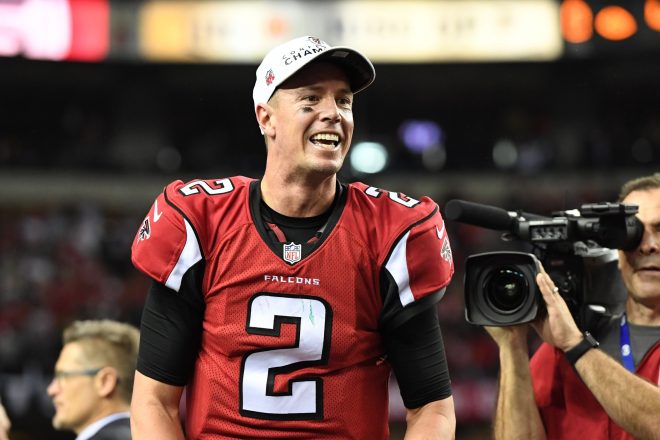 Heading into the league championship match-ups last weekend, all people talked about was how incredible it would be to see Aaron Rodgers take on Tom Brady or Ben Roethlisberger, setting up a potential marquee match-up that the NFL was likely hoping would come to fruition.

Most of those people never seemed to expect Matt Ryan and the Falcons to earn a trip to Houston.  They believed it would be Rodgers and the Green Bay Packers as the ones who would be left standing from the NFC, and outside of Atlanta, the temperature seems to be quite cool that it will be the Falcons battling Brady and the Patriots.

And their fans aren’t happy about it.

Although it’s hard to consider them a rabid fan base.  According to the Atlanta Journal Constitution, almost 250,000 fewer households watched the the Falcons in their first playoff win over the Seahawks just over a week ago, not jumping on the bandwagon until they faced off against the Packers last Sunday when Rodgers and company came to town,  That game finally pushed the number to over 1-million homes, but it was still less than half of the market that watched their team advance to Houston.

In Atlanta, the media is calling the Patriots the “known commodity”, while the Falcons are the inexperienced bunch sitting as the David getting ready to face off against the NFL’s Goliath.

While the Patriots allowed the fewest points in the NFL on defense, the Falcons finished 25th overall.  However, like New England, they’ve improved quite a bit since the beginning of the year.  Despite facing Brady and the group of weapons he brings with him to Houston, Mark Bradley of the Atlanta Journal Constitution believes that the Falcons’ defense has been “outperforming its tepid numbers.”  On offense, he feels the Patriots “have looked good” in the postseason, while the Falcons “have looked great”.

“I could get all righteous about Spygate and Deflategate, but I’m kind of gated out,” writes Bradley.  “I admire Bill Belichick but consider him an ass. (Blame Papelbon. He taught me that word.) I admire Tom Brady but have never warmed to him. (In my book, he’s no Bobby Orr. I loved Bobby Orr. Growing up in the hockey hotbed of Maysville, Ky., I’d listen to Bruins games on WBZ.)”

He believes that it would be “no great upset” if the Falcons are able to win this one and he’d actually be surprised if they don’t.  Listening to local radio in Atlanta on Tuesday, the fans who are on board are fired up, and they’re not afraid and like their team’s chances.

They see their team poised for an upset of epic proportion and Bradley is confident the Falcons could pull it off.  In fact, he’d love nothing more for Ryan, a Boston College alum, to  hand New England a loss on the NFL’s biggest stage.

“Do I like the Patriots? Nope. Do I find them insufferable in their arrogance? Absolutely,” writes Bradley.  “Still, they’re a team trying to win, same as every other team in every other city. I understand folks up there mightn’t feel stoked about this game, but that’s OK. Imagine how it will feel when their proud team loses to a franchise that hasn’t much of a history. Imagine seeing the alum from the Jesuit school in Chestnut Hill lift the MVP trophy. Imagine that.”

Bradley and whoever else jumps on the bandwagon will find out in less than two weeks if they’re right.